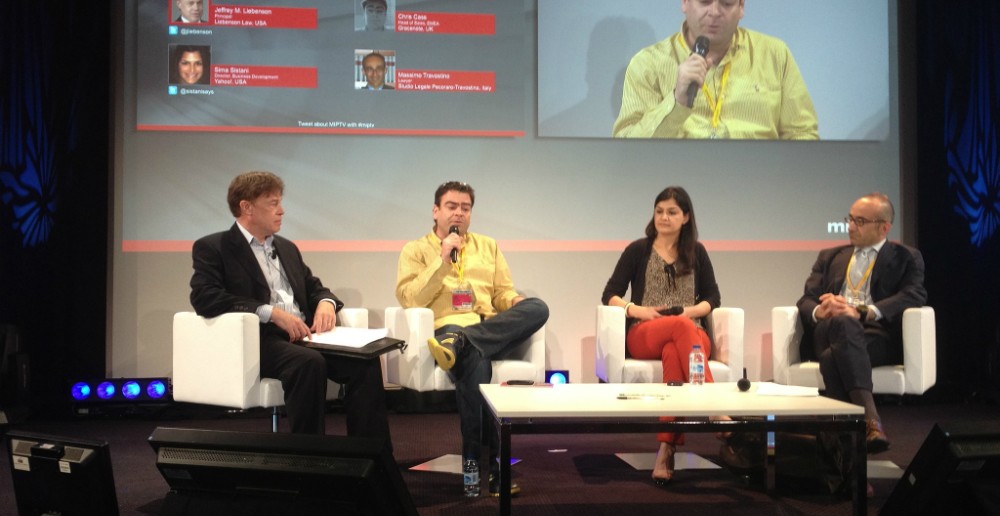 Gracenote, Yahoo and Studio Legale Pecoraro-Travostino get legal on the challenges of digital business.
By Stuart Dredge on April 3, 2012 0 Comments

There has been a lot of talk about innovative business models around TV at MIPCube and MIPTV this year, but what about the legal hurdles that lurk as media rights converge?

A panel this afternoon dug into the topic, moderated by Liebenson Law principal Jeffrey M. Liebenson (left). The panel was held in association with the International Association of Entertainment Lawyers (IAEL).

“Traditional contractual agreements are increasingly rare these days,” said Liebenson, suggesting that dealmakers must be aware of how new platforms and devices are evolving. “Only then can the dealmaker be most effective in licensing windows and the architecture for a deal.”

Travostino said “the multiplication of devices, of protocols used is really changing every day, and so the same is for exclusivity clauses or holdbacks or most-favoured nations clauses, which spans from licensing conditions to equities which could be allowed and sold by the licensee to third parties.”

Travostino also raised the issue of piracy, noting that “the first thing is to offer a viable solution to the customer, an alternative to the customer to the pirate contents”.

Sistani spoke next, saying that the focus for television remains on its primary screen. “But there’s a lot of value being left on the table by content producers,” she said. “What I see now is the digital rights are being thrown over because they’re so focused on the primary screen and getting the best terms for that. They’re throwing the digital rights in as a value-add, but that’s going to come back, as it did with music.”

She noted that when digital rights are thrown in, the content may end up on an unimpressive, barely-promoted site belonging to the network, whereas if the rights had been separated, they could be getting a lot more love elsewhere online.

Cass said that the obvious new entrants into the market are connected TV manufacturers, who are “aiming to own the end user” where they wouldn’t have in the past. “And the battle for the second screen. It used to be everybody had an 808, now everybody has a second screen!” And he added that many different companies are looking to own that second-screen experience for TV viewers.

Who controls the selling of the advertising and gets the ad revenues from a second-screen app though – brands, broadcasters, technology firms? “It could be anybody, that’s why this is opening up such a fascinating world,” said Cass.

Sistani talked about apps, saying it’s hard to get attention in the increasingly crowded app stores. She advised broadcasters to partner with companies who already have second-screen apps on people’s handsets – Yahoo’s own IntoNow would be one example, along with Shazam, GetGlue and Miso.

“Harnessing that community and then providing the content on top – that’s the big win,” she said. Yahoo worked with ABC News to “activate the Republican primary debate” – the IntoNow app polled the audience watching at home for their reactions to what was being said by the candidates, then feeding that back in real-time to the debate’s moderators.

“At one point in the debate they stopped the debate, and [moderator]George Stephanopoulos looked at Newt Gingrich and said “72% of our IntoNow audience doesn’t agree with what you just said. Do you want to rephrase?‘”

Travostino said that this must filter into the dealmaking process: what data and services will run around the content, rather than just the content itself. Because that will also be affecting where people choose to watch TV shows and films.

He also pointed out that legislation relating to data collecting and protection vary between Europe and the US, which raises another issue when negotiating contracts.

“Content is king, but metadata builds empires,” said Cass. “Having great data is a way for legitimate services to monetise your content. There’s an amorphous mass of digital content out there: how do you find this stuff unless you have relational links between the content.”

Sistani said that currently, the second screen is being activated by the distributors – networks – through their own apps or with partner applications like IntoNow and Shazam. “In a lot of cases it’s a value-add… Where you get the producers involved, there’s the opportunity to make it a game-changer… It’s going to take content to bring this to the next level.”

She continued: “I would liken it to five years before when you had all these brand integrations. I think the same thing is going to happen for the second-screen space, where producers are going to start holding that back, and those same sponsorships are going to start leveraging the second screen.”

The conversation moved on to rights for platforms that are additive versus platforms that cannibalise. With second-screen and streaming of “shoulder content” there should be more leeway, especially if it’s driving people to tune in to the main show.

“If you have some kind of new reality show that’s coming on, there’s a show before the show that’s a web streaming event where you’re trying to find the final contestant for that show. You’re starting to build loyalty for the show before it even airs.”

“One change is it’s hard to know in advance when something’s additive and when it isn’t,” pointed out Liebenson, but he agreed with Sistani that making the most of this is may involve producers holding back rights to make this kind of spin-off.

Travostino pointed to other challenges posed by fast-evolving technologies, and legislation’s failure to keep up.

“European legislation is usually more difficult to grant future rights – rights to future technologies. This is very complicated and gives rise to big problems when it comes to exploiting technologies that were not about when the rights were negotiated.”

How does all this affect content creators’ dealmaking when making their shows? “At the end of the day, it always comes back to leverage,” said Sistani, suggesting that producers get advertisers on board in advance for their projects. “That way, you’re coming to the table with clout.”

Liebenson talked about apps launched by Cablevision and TimeWarner in the US to allow subscribers to watch TV on their iPads, spurring some networks to sue, arguing that the cable providers did not have rights to deliver their channels to these devices.

“The fundamental issue related to how those contracts were drafted and what they meant.” The point being that most of them had been drafted before the first iPad went on sale.

“From a usage perspective we can learn a lot from the music industry. It’s access to content,” said Cass. “It’s the different way that it’s going to be consumed and on which device, which is something for lawyers to plan on. But what we have seen is not just ownership but accessibility.”

Travostino gave a lawyer’s perspective, noting that on one side there is a rule that protects content owners – “if you do not expressly permit a specific right, it stays in the content owner”. But if you are too specific, indicating precisely which devices, the bigger the risk of a slightly different device coming out the next year, and will thus not be included in the rights.”

The panel talked about negotiating holdbacks for content owners. “I think you should license what you have,” said Cass. “I’ve come from the music industry and seen what happened when people held back their rights. It wasn’t a pretty sight.”

There are also territorial issues to take into account. Sistani addressed the issue for second-screen apps. “It’s tending to be more impactful in areas that have tablet devices and smartphones… IntoNow is only available in the US, but there are lots of people who are approaching this space in Europe, Asia, Canada… Local players are emerging in each one of these markets.”

Cass said that this is a healthy thing, ensuring that second-screen experiences are sticky and positive for TV viewers, and fully localised for their countries.

The panel finished up by talking about the key near-term trends they see in the digital space. Cass said arguments over ownership of the end user between set-top box makers, TV companies, console manufacturers and broadcasters. “Everyone is into the game of trying to own the end user,” he said.

Sistani said questions around ownership of rights and windows for content, as well as the question of when content is promotional versus when it’s monetised. “It’s all bleeding edge and I’m on the ride with everyone else,” she said.

“I’ve heard this referred to as a golden age for media,” said Liebenson. “It’s a fascinating time to be involved in this space. We need to be very creative. We need to understand and anticipate how things are evolving in the environment.”