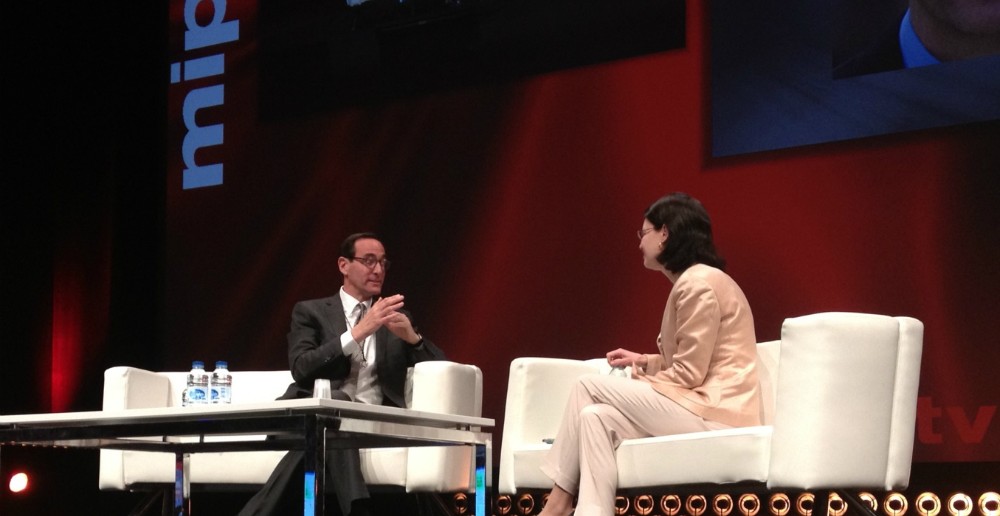 How is the network behind Mad Men, Breaking Bad and The Walking Dead responding to digital disruption?
By Stuart Dredge on April 2, 2012 1 Comment

Mad Men, Breaking Bad, The Walking Dead, The Killing… AMC Networks is on a creative roll, which made this afternoon’s MIPTV Media Mastermind keynote a big draw.

President and CEO Josh Sapan took to the Grand Auditorium stage to talk about the value of original programming, how his company sees the TV world, and its international expansion with Sundance Channel Global.

He started by talking about the current pay TV paradox. “On the one hand the enormous success of pay TV worldwide, and the simultaneous challenge that the internet and digital video posed to that success, and what we might be able to do about it.”

He continued with a positive note: “For all the talk about how TV is the least favourite screen for younger audiences, teenagers are actually watching more TV, not less.”

But he noted that the success of the pay TV market is becoming more fragile every day, citing three of the phrases that you’re likely to hear when strolling around a TV industry conference in 2012: “Cord-cutting, digital disruption, binge viewing.”

“When the internet is serving up the episodes it’s that much easier to binge,” he said, suggesting that it is “the single greatest challenge to the pay TV ecosystem”.

“The internet has already been proven to have what we might term tsunami-like qualities,” referring to the music industry as one cautionary tale about the effects. “Cord-cutting is a fact, and while the numbers are small, they are growing.”

What will keep people wanting to watch TV everywhere, and paying to watch on all their different platforms? “One thing and one thing only. Content. Content really drives authentication and TV everywhere. And it’s not just any content that drives people to those connections. We refer to it as iconic content as the most important element in the whole authentication system.”

Sapan continued that most people will have one, two or three of these “hate-to-be-without” series, and suggested that it’s these programmes that will help the pay TV sector continue to grow, despite challenges posed by the internet.

“When TV creates shows that are iconic, and these shows are properly deployed, through technology that allows them to be watched whenever and wherever they want, TV gains the power to work with the web rather than against it.”

Sapan added that the connection forged between these shows and their audiences “is the killer app of TV’s digital age”. Something he called “connection TV“, referring to the Talking Dead show that follows The Walking Dead each time an episode airs, fuelled by fans and studio guests talking about what they’ve just watched.

Sapan talked about the idea of “superviewers” – the keenest fans of these iconic shows – as being increasingly important. And he noted that the second season of The Walking Dead and fifth season of Mad Men were hugely popular because their previous series were available digitally. “The availability of the first four seasons of Mad Men on the digital outlet Netflix allowed new fans to find the show and catch up,” he said.

He went on to say that the key is to find the right technology, “married and driven by the right content that will respond to and then take advantage of the new rules in viewer engagement”.

And on to Sundance Global: “We are investing in content for the US and for the globe, and seeing results,” said Sapan. “That channel can take advantage of the technology, fuelled by content that people care about and want to stay with.”

Next was the Q&A section of the keynote, with World Screen’s group editorial director Anna Carugati posing the questions. How does AMC Networks distinguish itself in the global market with its channels?

“These dramas that we are producing and acquiring, we think as television competes with alternative outlets – the web is going to continue to offer many many many options for people to get TV at their choice – linear TV… will need to be driven by something that really matters. We think that what Sundance Global Channel does globally is matter.”

Sapan said it was an opportunity to go global, but also an imperative for AMC. “We hoped that we could offer something that had a unique contribution to the success of a cable operator or satellite company’s business,” he said, on the opportunity side.

He added that the pay TV market is hugely more competitive nowadays, which is why there’s a need to be meaningful, and “something that is not available on the web, because the web does have an imperative by its nature, without anybody deciding, which is that it’s available… which can have a terrible imperilling effect on a pay business.”

Sapan also talked about AMC’s strategy in the independent film sector. It was the first company in the US to offer movies on cable video-on-demand the same day they were being shown in cinemas.

“The films were small enough, they were often hidden gems. And putting them on VOD the same day they went to theatres actually had a beneficial effect on both platforms,” he said. “And we priced them pretty close… It has worked really quite well. We see now more revenue from non-theatrical in aggregate than we do from theatrical.”