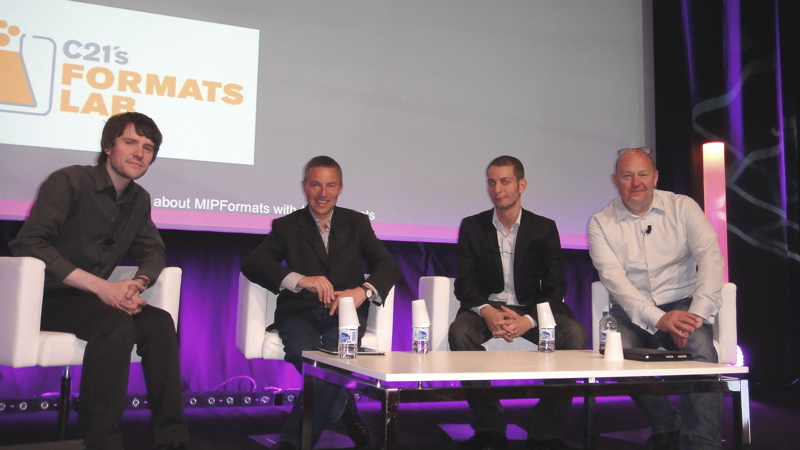 Journalists and tech gurus from the UK and Israel join forces to bequeath keys to digitalisation.
By Angela Natividad on March 31, 2012 4 Comments

A well-chosen diversity of tech journalists and techies each imparted their own “10 Tech Commandments” to MIPFormats today, as C21Media’s David Jenkinson moderated. From the resulting 30, we extracted 15 that captured shared ideas or yielded new paths.

1. Open up your content, Bryant preached. Consider EMI with its OpenEMI programme, which enables partners (including apps developers) to sell music from EMI’s catalogue with a revenue-sharing model, all while building new kinds of experiences around that content.

2. Go all-in on interface. Bryant is a big fan of iPhone application Path and isn’t afraid to say so. The interface is elegant and agreeable and provides users with a Facebook-style space that is reassuringly intimate.

3. Co-create with your audience. Real Housewives is launching a social game à la FarmVille, and action from the game will feed back into the show – giving audiences that much more reason to watch what’s going on, Bryant said.

4. Consider second-screen carefully, quoth Bryant. “It may be tempting to create your own app to follow along at home with,” but there are lots of great partners who can help you fight that battle. Consider “TV sidekick” Zeebox, or Miso, which launched a Dexter app that lets you follow the show with quizzes and trivia.

Nonetheless, Bryant emphasised the importance of considering how content will be consumed via mobile in the next handful of years.

5. TV is still a lean-back experience. “It’s incredibly important to remember that if you’re asking people to take part, most of them actually still won’t want to,” said Mark Rowland. Consider the Gartner Hype Cycle: 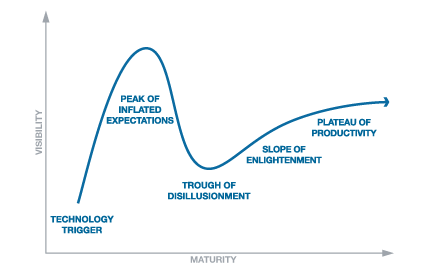 Somewhere between the Peak of Inflated Expectation and the Slope of Enlightenment is your pitch. Consider carefully what you’re asking people to do.

6. Novelty is insufficient. Tech must develop story or increase jeopardy. “Beware something which says to the audience, ‘something more exciting is happening where you’re not’, assuming that where you are is in front of the television,” said Rowland.

7. Apply 360°-thinking in production. Rowland points to how online karaoke site Singsnap lets users all over the world duet from home. This syncs with a TV show — you have to think of all these experiences simultaneously.

8. Make commercial terms as simple as possible. “If there are complicated deals where people are incentivised in different ways, then that’s going to be as big a problem as not getting the tech right,” Rowland said.

9. Check broadcaster rules and use common sense. Myriad long-term headaches can be avoided when you do due diligence first, Rowland reminded us.

10. Don’t let the tail wag the dog! “Television is television, and it’s gonna remain that way for some time. So it’s important to get the balance … all the things you want in the show, right,” said Rowland.

“First and foremost it needs to be a great passive experience. I want people to enjoy a great piece of television. They don’t need to go further than that.

Jenkinson, ever-ready, compared this awkwardness to watching one’s father dance in a disco.

11. Soup should be seen, not heard. “This is basic table ethics … My mother always told me not to put my elbows on the table, but today, once she gets a mail, we lose her,” said Jonathan Laor, illustrating this with an image of previously-intimate tablemates checking their phones, elbows on table and heads clearly elsewhere.

12. The post PC era: companion devices. Mobile is with us all the time, Laor said. “They’re in our pockets, this is a very close relationship with the consumer, and most importantly, they don’t interrupt the lean-back experience.”

14. New social foundation: contact lists. “If we were able to do social gaming [using]the contact list, that would be very powerful. I don’t know if we’ve even begun to exploit that source of information,” Laor ruminated.

15. Vision and learning. “There are people that have far greater vision, that know something that we don’t.” Laor appears to believe our industry Steve Jobs is Endemol founder John de Mol. “Everything he does in this respect is right bang on the money, and we look and try to analyse what he’s doing.” That’s what format people should do, he added: “understand there is a force in this industry that knows more than we will ever know, so just look and learn.”