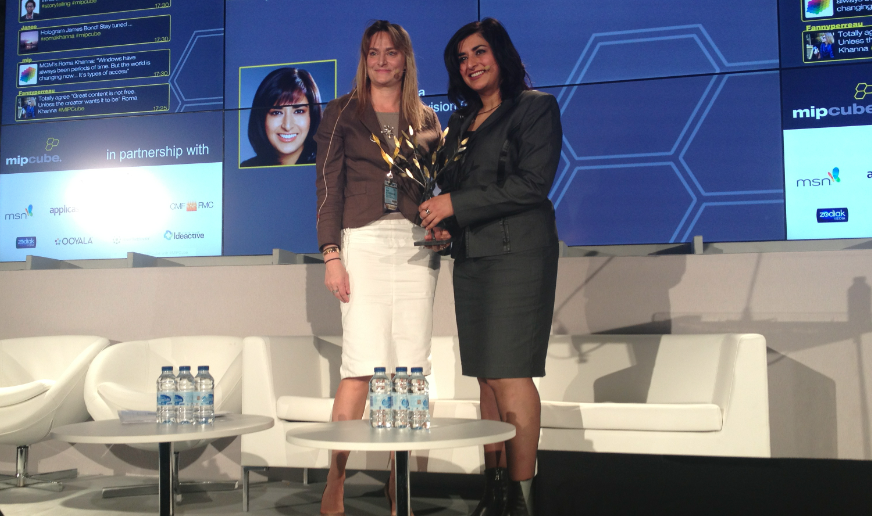 Celebrated as the first Media Architect of the Future at MIPCube, but what are her key trends?
By Stuart Dredge on March 31, 2012 0 Comments

Canadian television industry executive Roma Khanna has a key vantage point on digital disruption in the market in her current role as president, television group and digital at MGM. Today, she received the inaugural Media Architect of the Future award at MIPCube, and took to the stage this afternoon to outline her vision of the future.

She noted that the first talk she ever gave on the future of television was in 1999, and its list of six guiding principles remains the same, even though the content for those principles has changed.

Khanna went back to the dictionary definition of television – ‘distant, at a distance’ for tele, and ‘the act of perceiving with the eye’ for vision. “Nowhere here does it mention technology,” she said.

“Television is not a device, but rather an experience. And an experience that largely takes place in the hearts and minds of the people at the other end of the storytelling.”

She also thinks that “Content is king, and it will remain so… Everything else changes, but it’s that experience that will keep us coming back for more.” She added that “Quality matters. Just because everyone can make television doesn’t mean they can do it well.”

Khanna talked about great content for the internet, including Happy Tree Friends, Epic Rap Battles of History and Funny or Die, but said it’s important that they’re not the same as shows like Stargate, Fame or 21 Jump Street on TV. “There’s room for all of them.”

The second principle is “Distribution is not all that matters. It is fundamentally important if you can’t get the content.. but it’s not the distribution method that defines the experience… It’s the thing that should disappear into the background, and that you completely forget about.”

Khanna noted that distribution is no longer about the gatekeepers. “The audience has demanded that gatekeeping is not acceptable, because it’s about choice, and it’s about taking away choice. Our audiences today expect choice… and if they’re not getting choice, and better than that control, they’re not happy.”

And more: “You can’t control your audience… When you look at who’s successful today: YouTube, Wikipedia, Facebook, Twitter, this is all about putting control in the hands of the audience.”

Khanna talked about the importance of “tastemakers” – “we’ll give you everything, but y’know, everything’s a lot”. So audiences want recommendations on what to watch, whether that’s from friends or from Apple.

“It’s about that editorial voice, it’s no longer about controlling that environment… but about navigating through it… Apple is not a gatekeeper, it’s a tastemaker.”

The third principle is “we are socially networked” and always have been. 10 years ago it wasn’t Facebook or Twitter, it was chatting about last night’s TV around the watercooler. She added a caveat for the current buzz around social TV.

“Not everything needs to be interactive,” she said, noting that a show like The Hunger Games suited social media, and a well-planned campaign to have content and interactivity around the story.

“What if we had tried that with The Vow?” she asked, about the romantic comedy. “I’m not sure what the interactive application would look like… Doesn’t mean we wouldn’t market it online, but not everything, and every story makes sense interactively.”

Khanna’s fourth principle is that technology does matter. She praised Apple’s new Siri voice control feature in its iPhone 4S: a female voice who users speak to to get help. “Technology has to be transparent. It has to be something that fades into the background… It should just be that thing you turn to without thinking… It matters the most when you don’t think about it working.”

She noted that technology needs critical mass to become meaningful – to have millions or tens of millions of people using it. That extends to 3D. “People come in and pitch great 3D TV ideas. It’s not time yet.” Although she said 3D’s time will come, with the right genres. “Technology in its time.”

Her fifth principle is that business models matter. “We have to find ways to make it work, it can’t all be advertising money,” she said, referring to the success of mobile game Draw Something, which uses micropayments to sell its players new colours to scribble with. The TV industry should be thinking about how this model might apply to its content.

Finally: “Great content is not free, unless the creator wants it to be,” she said. “We have to value these things. We have to think it’s worth just as much to get the game, get the video, get the show, as it is to make the connection.”

Following her set-piece speech, Khanna sat down for a Q&A with Reed MIDEM’s Anne de Kerckhove, to explain more about her job and how she sees the TV industry.

What are the first things she looks for in great content? “The first thing is the story, always,” said Khanna. “The ones that work are the ones that start with someone who’s passionate about a story… And then they move to the digital afterwards, and say ‘this is how this story needs to be told.'”

What about rights and windowing? MGM has kept the rights for some of its big upcoming movies like James Bond and The Hobbit. “Traditionally we’ve sold content in windows. Windows have always been periods of time. But the world is changing now… It’s types of access… We spend a lot of time thinking about that, and about how to manage that process. Business models matter, we can’t just put everything out on the first day.”

What happens with Bond next? “Today, Bond really lives on film, and it works. Over time that will change and over time that will evolve. I hope they get to the hologram version: I’ll be the first one to sign up!” But she stressed that Bond really works best on film, and needs a film-sized budget for its explosions, locations and other key elements.

What advice would she give to young producers, in terms of what she wants to see from them? A great story, again. “It’s not about gimmicks, it’s about great storytelling.”