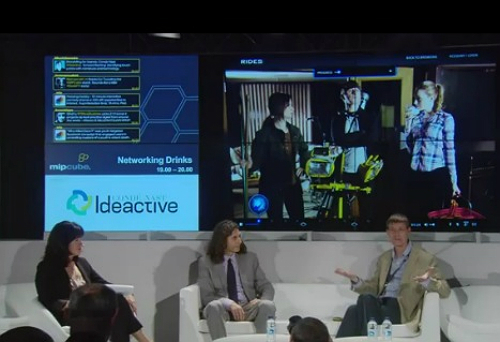 How the publisher of Vogue, Wired and more is working with Fourth Wall Studios to get multi-dimensional with TV viewers.
By Stuart Dredge on March 31, 2012 0 Comments

While there’s a lot of excitement around what Twitter’s Tony Wang described yesterday as “artful” uses of social media to bring a new dimension to TV shows, some companies are trying to go further still. The Conde Nast Ideactive session that closed MIPCube’s first day was a good example.

One of the projects shown was Dirty Work, an interactive comedy about a crime scene cleanup crew in Los Angeles that will make its debut later this Spring on Fourth Wall’s Rides transmedia platform.

“We thought we’d make something that is easy to consume, like a ride in a fairground,” said Stewart. “It starts, you have a helluva fun time, and then in 20 minutes time it’s over.”

The idea behind Rides is that stories are delivered through multiple devices and tools, including browsers, email and mobile phones. Stewart explained that an example might be watching characters on a big screen, then getting a text message sent by one of them, making the viewer part of the action.

The idea: to “build a show that knows you’re out there and how you want to watch”, while also building in achievements and rewards of the kind seen most often in video games.

“I finish a mission in Call of Duty, I get a badge. I finish an act in a TV show? I get a car insurance commercial!” said Stewart, as he outlined why Fourth Wall is looking to change that, and encourage people to interact with dramas on multiple levels.

Goldkrand said all this is important to “build new habits”, and get beyond the idea of “flat media”. He thinks that while it’s interesting to have, for example, characters tweeting while a show airs – one of the ideas suggested by Wang – that’s still a “20th-century” approach to TV.

“A 21st century model is I’m holding my phone, my phone rings, and now I’m a part of that story,” said Goldkrand, who was involved in building the alternate reality game for US TV show Dexter to capitalise on some of these concepts.

“A new story was being created with them, and that the participants were understood as characters in the narrative,” he said.

Brands can get involved in these sorts of storytelling projects too, as Conde Nast would vouch. Goldkrand said that they have to look beyond pure product placement though, even if that’s for now the most common form of involvement. “We really have to drill down and smell the essence of that brand.”

Both panelists warned against focusing on gadgety gimmicks over story when making transmedia entertainment. “You can’t use a gimmick and assume it will work twice,” said Stewart.

“We want to find the ways in which this really moves people, and in which the technology has to serve the story versus being ‘oh, I haven’t seen that before’ distracting, and then move along.”

Goldkrand noted that gimmicks won’t create emotional investment from viewers. “The idea that your phone can ring could be really cool or it could be really annoying.” The key being that it has to further the story.

Stewart also said it’s important for transmedia to get beyond something that only geeks like and/or understand.

“The whole idea is to stop new media being something only the cool kids could do,” he said, referring to “the mother-in-law barrier” as an example. If people’s mothers-in-law can understand and enjoy this kind of show, it’s on the right track.