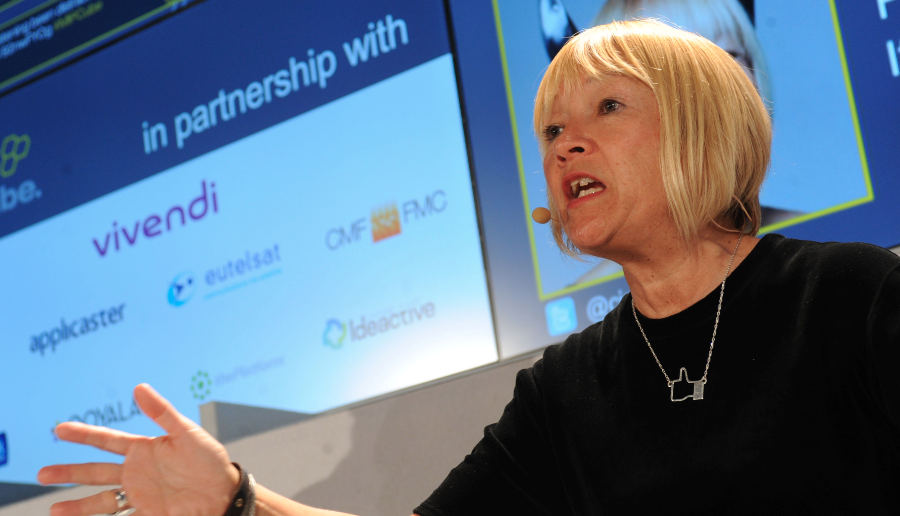 Rewiring television for the new world order, with or without a virtual twist.
By Stuart Dredge on March 30, 2012 0 Comments

Disruption of traditional media is the key theme at the inaugural MIPCube event, and the day got off to a sparky start with two ‘Visionary Talk’ sessions from IfWeRanTheWorld.com‘s CEO Cindy Gallop and Machinima president Philip DeBevoise, moderated by General Creativity president Robert Tercek.

Gallop’s background is in advertising, but she currently has two main irons in the fire: ‘web-meets-world’ platform IfWeRanTheWorld, which aims to turn people’s good intentions into actions, and Makelovenotporn.com, which is looking to disrupt the adult entertainment industry.

She started with a quote from startups incubator Y Combinator founder Paul Graham, who wants to fund startups who are looking to “kill the movie and TV industries”. “He sees an industry that’s gotten so big, it’s gotten conventional,” said Gallop.

However, Gallop warned that this really is about redesigning the ways TV companies think and work, rather than paying lip service to digital disruption at a conference like MIPCube, then going back to the office to continue as before.

“You have to blow it up and start again,” said Gallop. “You cannot do new world order business from an old world order place.”

The site, Makelovenotporn.tv will launch in May. The key challenge is finding companies to provide payment infrastructure, because it’s classed as adult entertainment – thus no PayPal, Amazon, Google Wallet or other big payments systems.

That’s forced Gallop to do deep research into other payments startups, which she thinks provides lessons for the TV industry. “The future of television is inextricably bound up with the future of payments,” she said.

Gallop went on to talk about the idea of flipping the access and distribution models for TV companies, and also advised that “the new marketing reality is complete transparency”, and that “we all have to move from doing good business, to doing business good… people need to believe that this industry is a force for good”.

Gallop also talked about the challenges of getting original content ideas funded, including her own efforts to get TV shows up and running – finding them shoehorned into existing programme formats by commissioners.

“Everyone is scared sh*tless, which is understandable. In a recession which is cutting as deep as the current one is… people are terrified, and that fear communicates itself from the top… If you want to redesign your future as an industry, you have to lose the fear… Decisions made out of fear are always very bad decisions.”

Gallop wants people to “put the vision back in television”. As a curveball form of inspiration, she cited website Texts From Last Night, which gathers people’s drunken text messages. Funny, modern poetry, and “an absolutely riveting socio-cultural snapshot of our times” she said.

“The buzzword of the moment is social: social media, social TV, social platforms. Social is simply all the same old human truths… People are the same as they always have been, they just have new ways of demonstrating it.”

Gallop thinks TV can have a similar power to hold up a mirror to humanity, and create empathy, connecting viewers “in a way that no other medium does half as powerfully”.

Has anyone done a good job in the traditional media and entertainment industries of redesigning themselves, as Gallop advises? “I can’t point to any shining examples at the moment,” she admitted, while stressing that this should not be taken as a reason for companies not to try.