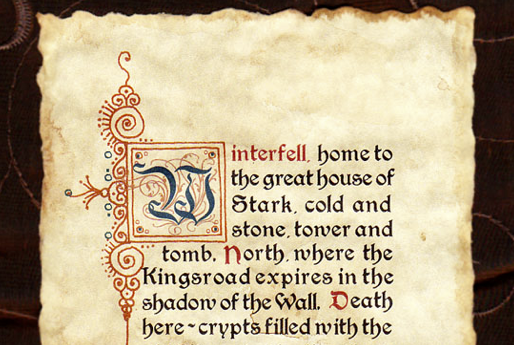 Ian Ginn: From Producer to Producer: Getting started with Transmedia

How should producers embrace the new reality of Transmedia? MIPCube speaker Ian Ginn, of Hubbub Media, answers.
By James Martin on March 27, 2012 0 Comments

Photo: Game of Thrones parchment: an example, cited below, of just how far beyond the show transmedia can go. More pics in this post…

Producers have heard enough about transmedia to know that it’s important, it’s arriving, and that it has the potential to deliver high-value business in both national projects and international co-productions.

Now the demand is to get hands-on knowledge and to learn how to develop and produce transmedia projects. To bring the concepts, tools and processes of transmedia storytelling and production to mainstream producer thinking and practice.

I spend the majority of my professional time as a creative producer working with co-producing partners on transmedia projects. Television and feature film producers would recognise a lot in our development and production processes and pipelines. Much has been adapted from what we’ve learnt and used in video about scripting, production and editing. Much has been adopted from game and software design and development. And because transmedia projects converge multiple media, we include partnerships and their pipelines in whatever we need to create.

A transmedia production team can feel and function a lot like a creative agency, whose producers are those busy souls tasked with sourcing whatever a client project requires. Think of the props created for the Game of Thrones transmedia extensions – ancient-looking boxed bottles of scent, manuscripts (photo), and in-world food sold by New York street vendors – and you can see that it works the same way.

Our core transmedia team would also include community managers, interaction and game designers, and digital producers responsible for story blogs, YouTube channels, and the Twitter and Facebook accounts of a host of virtual characters.

A large part of your potential audience is already beginning to consume stories across media in this way, and their expectations of entertainment are being changed. Which is driving media and creative industries to fast move away from numbers towards relationships, from “eyeballs” to engagement.

How should producers embrace this new reality? You have limited capacity and make daily operational choices regarding which projects to pursue. You already maintain multiple projects in various stages of development.

In order to propose, develop and produce your first transmedia project you need confidence that you understand the value-chain from funding to distribution, that you can access new skills and processes and organise them as cohesive and efficient production teams, and that you have the required information to choose wisely to build on existing business, and so reach new generations of audience with new content offerings.

Ian Ginn founded Hubbub Media in 2008 to develop original transmedia properties, and in 2010 the Transmedia Learning Network, which aims to professionalise the field of transmedia content creation and production. You can follow him on Twitter and Facebook.