Gary Smith: How programmes are born at MIPs

Beyond distribution deals, shows increasingly get off the ground at MIP Markets: Marvista, Nickelodeon and Shaftesbury tell all
By James Martin on September 26, 2011 0 Comments

Photo: MIP Markets were instrumental in the launch of series like Canadian producer Shaftesbury’s Murdoch Mysteries

MIPCOM and MIPTV are generally still thought of as events where finished content is traded to distributors. But there is a growing trend for producers and start-ups to come to Cannes looking for funding, whether that comes in the form of a pre-buy, a co-production deal with a group of broadcasters, or from the growing presence of venture capitalists who recognise the potential value of TV and entertainment properties.

At any given MIPTV or MIPCOM, there have always been a number of companies who arrive with no more than a pilot of the series they hope to see in production, with a complimentary trend on the side of distributors and governmental institutions who these days arrive looking for ideas worth funding.

“The MIP markets have evolved into events that bring the various players involved in any given project together to do business,” Fernando Szew, CEO, MarVista Entertainment, says. “From broadcasters to producers, distributors and investors, the markets can serve as a one-stop-shop in getting new ventures off the ground and on the air.”

The children’s format series Prank Patrol Australia is a prime example of how MIP Markets brought producers, distributors, broadcast and financial partners to the table to bring this series to fruition.

“MarVista was appointed the international distributor by series creator/producerCanada’s Apartment 11. We sold the series as a format to Australia’s ActiveTV to be produced for ABC’s new digital childrens’ channel,” says Szew. “We then met with Australia’s state government screen agencies, Film Victoria and Screen Queensland who provided production investment funding. The possibility of such meetings is invaluable to the international television business.”

Chance meetings can also play their part in getting major international series green-lighted: “We had a meeting arranged for first thing Monday morning with ITV Global to talk about our kids’ properties,” Christina Jennings, CEO of Canadian producer Shaftesbury, says. “And when ITV Global’s Noel Hedges saw the flyer I was carrying about six feature films we’d made, the converation immediately focused on them. Two hours later we had a handshake deal concerning the distribution of movie properties.”

“But more to the point,” Jennings continues, “that has since grown into an important relationship for us since they started to get to know our slate. When theMurdoch Mysteries was suggested as a one-hour series with real international potential, it was made thanks to ITV Global, Citytv in Canada and UKTV, and the four series form part of a what now constitutes a massively important relationship for Shaftesbury. We’ve since made Bloodletting (below) & Miraculous Cures in 2010, and we are currently developing a new one-hour series, again with ITV Global.” 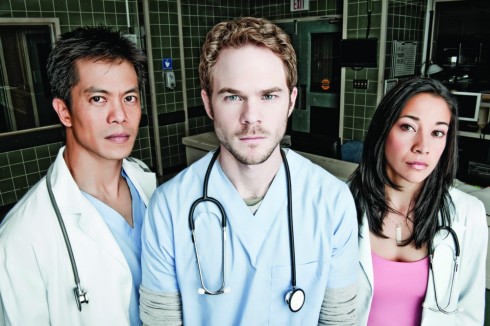 Although the origins of the deal go back several years, it is, believes Jennings, part of a larger trend: “Every year there are more opportunities for producers looking for funding, and it’s clear that MIPTV and MIPCOM are good places to find co-production partners,” she says.

“This MIPCOM we will be closing several important co-production deals, one with a Scandinavian company and two with a French broadcaster, and all of them were set in motion through previous MIPs.”

According to Jules Borkent, SVP, global acquisitions and international programming for Nickelodeon, MIP Markets are events where he and his team actively search for promising new production ideas: “We do this sort of thing every day but at markets, we can be wholly focused on new content ideas for a whole week,” he says.

“And companies actively pitching for production partners does seem to be a growing area of the MIPs. At MIPTV 2010 we had a meeting scheduled with RDF Kids (now Zodiak Kids), where we had no idea that it was going to be a pitch, but they had prepared a great trailer for a series called Tickety Tock. The whole acquisitions team was there and we were all very impressed, so we moved quickly on it. The pre-buy deal was signed at MIPCOM 2010 and now the series is set for a global launch on Nickelodeon in 2012.”

Not forgetting the next generation: investors and venture capitalists are also increasingly fuelling the production of new TV and entertainment initiatives.Paris-based fund HEC Incubator, alongside Balderton, Comcast Interactive,Morgan Lewis and Ventech all took part in the inaugural CC Ventures competition, looking for innovation in connected entertainment at MIPTV, but also showed a keen interest in investing in audiovisual content.

In other words, the future is bright!