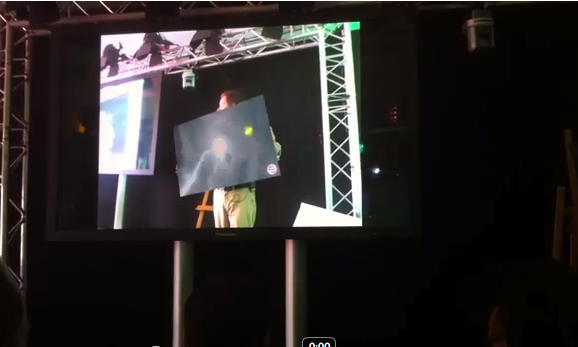 If you’ve not popped in to the Experience Hub outside the Palais, it’s well worth a visit: a range of startups are showing new technologies and apps that will change the way people interact with TV shows and other content.

Autonomy took the stage this afternoon for a talk on ‘monetising your content with augmented reality’, explaining the potential of AR for the content industries. Autonomy’s Matt Mills explained how it all works, with an iPhone app called Aurasma developed by the company.

He showed a demo that involved pointing the iPhone at a white poster for Despicable Me, which brought the poster to life with an animated character, seen through the iPhone screen. Mills also showed a Harry Potter poster which when viewed using Aurasma shows a 3D, tiltable video trailer.

What you’re seeing on the big screen to the left is what an iPhone user would see on their screen, when pointing it at the poster being held by Mills.

“Print media is the obvious next place to go to,” said Mills, pointing out that print ads are not very trackable, and also that they are out of date as soon as they go to print. Autonomy is pitching Aurasma as a solution: people look at print ads through their iPhone, and see animated, clickable content.

He also showed a sample copy of The Times newspaper, with the frontpage image replaced by a video news report, with the aim of that being more up to date than the print content.

“We can essentially merge the digital world with the real world,” he said, before showing a social networking demo that involves using augmented reality to make people in the real world “fully searchable”, including overlaying status updates above the heads of people who you’re pointing the iPhone at.

He also talked about companion applications. “We can turn any mobile device or tablet into a synchronised companion experience,” he said, citing the example of a Mad Men app for iPad that offers extra content while someone is watching the show on a TV – similar ideas are already being tried in the US by broadcaster ABC with its ‘Sync’ apps.

“This opens up everything from episodics to game shows to home shopping,” said Mills. Autonomy’s technology was originally for iPhone, but now works on the iPad 2 and Android devices too. The company has signed some clients already, but isn’t revealing who for now.

Here’s the demo of the Despicable Me poster, for another glimpse at how Aurasma works: