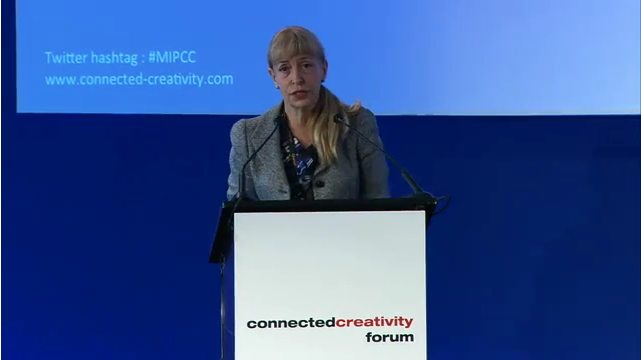 Liveblog: The Brain-Screen Connection: How will it work in the future?

We had an enormous treat today: Baroness Susan Greenfield, neuroscience specialist and Professor of Synaptic Pharmacology at Oxford University, came to talk to us about how technology is affecting our cognition — and just after a great session on the culture of tech piracy!

The session only lasted about 30 minutes, so to build to her thesis she gave us a crash-course on why the human mind is special (it’s a highly private state that, no one else can hack into) and how it works.

The more sophisticated the brain, the further you are able to draw yourself from mere dictates of your DNA. “I’m sure you’ve bought goldfish for your children,” she began. When they die, you can replace them before the kids come home; they won’t know the difference.

You can’t do that with cats and dogs, and certainly not their brothers and sisters. This is because the more complex the mind’s underlying framework, the more individual and particular an organism becomes. And the more sophisticated the brain, the bette equipped you are to adapt, which is what sets humanity apart from all other life on earth.

“Even if you’re a clone — that’s just an identical twin — you will have a unique configuration of brain cells,” the Baroness said, shortly before explaining why.

The brain operates like other muscles in your body: the more you exercise it, by thinking or imagining or placing yourself deeply into an idea or invention of the mind to examine its crevices, its hidden thresholds, the more active it grows as a function of that activity. And the more active it is, the more branches it forms.

Crucial to understanding this is thinking about the situation we’re in at birth, when we are pure Sensory beings and have the fewest amount of branches. In a short time, a baby makes a radical transition from merely responding to stimuli to suddenly recognising its mother. It has crossed from the state of the Sensory to the state of the Cognitive.

When these connections form, you’re able to evaluate the world dramatically differently — generic people in a photograph suddenly have names, faces, histories to you when you know them. And the more such connections you create in the mind, the greater understanding you have — understanding in this case defined as the ability to “[see]one thing in terms of another.” The more such understanding you possess, the more unique and broadly contextual your perspective.

In short, our entire identities are tied to this cognitive process: the development, scope and scale of our branches. The reverse can also happen and often does: dementia is when you drift back to the state of the Sensory, “where you can enjoy the sun on your face but you can’t understand why someone is shouting at you.”

Still with us? Good. Here is where technology comes in.

Today’s generation sees the world through the tyranny of a screen. “The only thing a screen can do is make noise and show images,” meaning screens go out of their way to be loud and vivid. This is great for attracting attention and stimulating an instantaneous response; a nice one-time hit is probably okay, but now people are living this way.

Think of gamers. “When you play a game to save a princess, do you really care about the princess in the same way” you care about Princess Marie in War & Peace? She had a history, a past and a future you felt deeply invested in, in great part because your mind invested in sussing out the work of Tolstoy nice and slowly. But one would be hard-pressed to argue that Princess Peach generates a similar response.

And that’s just the thing. Baroness Greenfield claims that gamer culture, blog, social media and lolcat culture is turning us into immediate stimuli responders, encouraging a return to the Sensory. The synthesis and reflection necessary to a state of Cognition is low-priority to the ability to respond quickly.

All this to say that we’ve placed ourselves in a complex situation akin to the BP oil spill. And in the same way BP told itself this problem would go away if it changed its logo and prettied its PR, we like to veer toward a simple answer — “and it’s usually wrong,” she said bluntly. We cannot be afraid of examining our situation and asking where it is bringing us long-term.

And if you buy any of this, I suppose we have to, because if we continue down this path, these are the traits the Baroness posits we’ll have in the next handful of years:

The list isn’t all bad, but having convinced us that this trajectory is what has brought us disproportionately high rates of ADD, schizophrenia and autism in recent years, the Baroness has made it clear that we need to snap out of what she calls the “existential crisis” and return to the higher road: the state of Cognition. It is the harder and less convenient choice, but it evidently yields biggest dividend of all: our individuality.