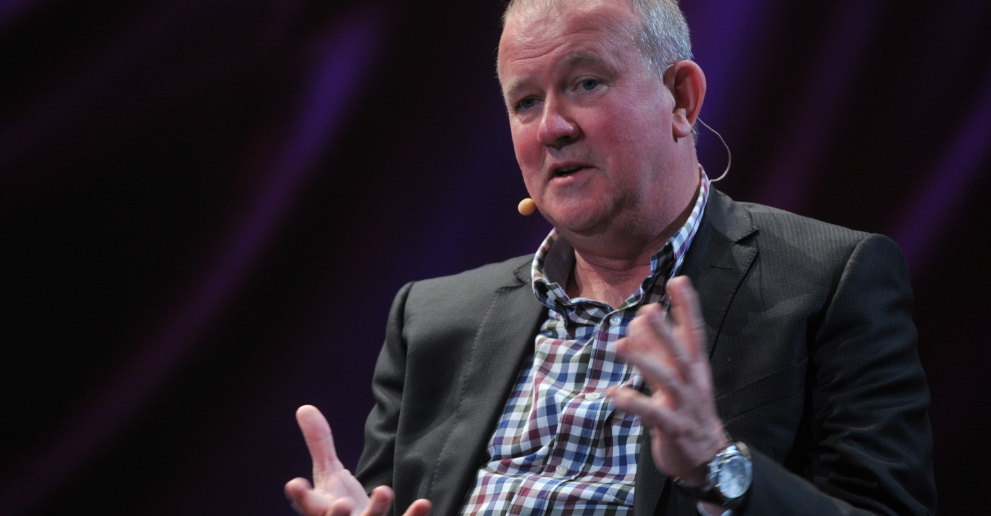 The view from the top of one of the world's biggest TV companies
By Stuart Dredge on April 4, 2011 0 Comments

David Frank is well known as the founder of independent production company RDF Media, which produced a slate of popular shows in the UK and US after its launch in 1993. In 2010, it became part of the new Zodiak Media Group, which Frank now heads up as CEO.

With 45 production companies across 17 countries, it has a catalogue of more than 10,000 hours of content, and is valued as highly as €1 billion. Frank gave the first keynote interview of this year’s MIPTV, questioned by C21Media editor-in-chief David Jenkinson.

“What I inherited was four groups within a group,” he said, hence the rebranding to Zodiak Media Group within his first month in charge of the merged entity, as it restructured around geographic divisions. He has also spent the last six months building a central entity for the group, to “connect the bits and pieces to make sense of it all”.

Frank said that the central challenge for any aggregation group in the industry is around creativity – “how does one try and ensure that the fantastic local talent operating in different local markets… how does one somehow combine that at the centre without destroying the local creativity?”

Which parts of the business are most active at the moment? Frank broke it down into three genres: kids, scripted drama and non-fiction. He was enthusiastic about the kids genre – “we’re generating what I believe will be over the next two or three years major global properties” – but was also buoyant about the opportunities offered by scripted drama and entertainment.

“There’s a lot happening… I don’t see it as a concentration in any specific market or genre,” he said, claiming that the range of ZMG’s output is what sets it apart from rivals in his view.

Does he see ZMG as a media/television company, or increasingly as a brand owner making “other stuff than the screen” in Jenkinson’s words? “I still believe that now and for some time to come, television remains our core activity,” he said.

“I don’t subscribe to the theory that the TV business is screwed, that it’s all going fragmented and going online or digital… I consider that we are a TV company first and foremost, but we will look to create content that we can play with on many different platforms.”

Frank was asked about the changing definition of a hit for a TV show. “If you are Zodiak, you would definitely define a hit in perhaps different terms to a specific broadcaster,” he said, suggesting that for broadcasters, a hit is “channel-defining”, whereas Zodiak sees a hit that ends up as being “valuable” – shows can be both – big entertainment shows for example – but not always.

How does ZMG decide which properties are suitable to be shared across the group? Frank talked about discussion between the senior executives at the company, as well as looking outside, to see how “large corporations incentivise staff to contribute to the global endeavour, and how they reward that success”.

He admitted that the difficult task now is how to apply lessons from those other companies to Zodiak’s own business, but said the group has taken some specific steps too, including setting up a central creativity and innovation unit.

It is also investing a lot in “the two-screen experience”, because the way TV is being consumed by the younger generation is changing rapidly. “Young kids are watching and communicating with their friends while watching TV. The digital platforms don’t replace TV, they enhance it.”

He added that “Where the broadcasters went wrong with the digital revolution is they said 360 has to start online… Personally I feel that’s a bit of a mistake.” He thinks producers have a chance to make their shows more relevant by understanding the digital world, rather than simply shifting content online.

Where are the sweet spots where Frank is looking to build value in Zodiak Media Group in the next five years? Branded content came up as a topic, and the company is lookign to build its relationships with brands. However, Frank was wary about this area starting to drive the business. “It’s the tail wagging the dog, I think, when your business model is trying to determine what the outcome is.”

He finished by declining to get teary-eyed about breaking up RDF Media Group, saying he prefers to look forward to future opportunities rather than back at the past. “This feels like a new exciting chapter, it doesn’t feel that there’s a negative angle to it.”