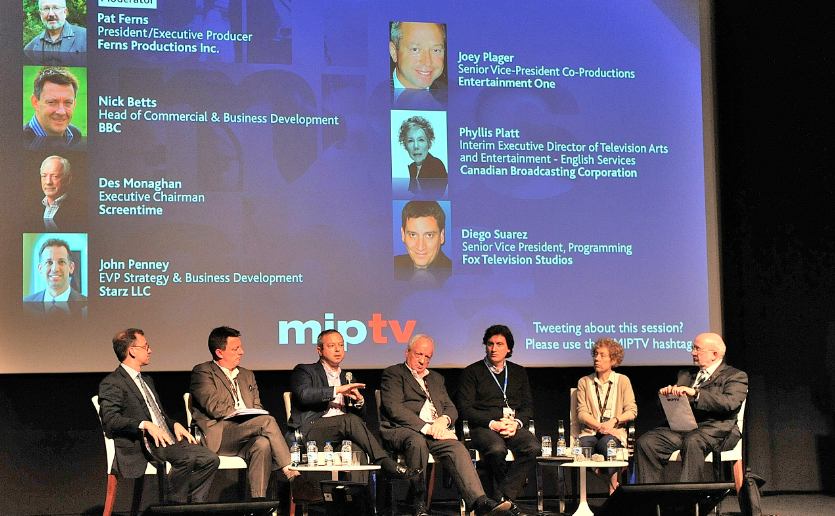 Penney provided a landscape of how the US entertainment market operated up to this point, building to the need for international co-production for the future of quality scripted content… and ways to expedite co-production relationships in the States.

Some background: the traditional model for US entertainment financing favoured big-studio, scripted content – whose bounty financed everything from the studio to the talent. Material was very exportable (think “CSI” and Law & Order”).

When the syndication market vanished, the economics of the model became to risky, opening the door to Europeans, who brought “light entertainment”. From thence came “Real World”, “American Idol”, “Survivor” and “Deadliest Catch”, among others.

“Non-scripted [entertainment]was a way to bring lower-cost, lower-risk programming, and in the early days it was very suspect whether it would work in the US.”

The solution? International co-production. Its merits:

“Camelot” and “Torchwood” are two examples of international co-production’s fruits. “You can bring more resources to bear” in the development of quality, universal and satisfying scripted content, Penney said.

“There’s a whole set of networks now that are pursuing scripted programming” aggressively in the US, Penney pointed out: The History Channel, AMC, Syfy, stars, HBO, TNT, etc. They can benefit from a more efficient int’l coproduction.

But co-production isn’t perfect. Some caveats:

Specifically, developing comprehensible standards between countries and initiating a more transparent collaboration process will facilitate scalability of international co-production in the US. Dialogue is crucial, as is being open-minded as well.

Unless you live in Canada. Platt’s CBC has found a way to use co-production in Canada quite efficiently, for both big and small projects.

“I think it’s because we are a very large land mass with a very small population,” Platt said modestly. Treaty co-productions can be counted as Canadian content for access to various tax breaks in Canada, depending on the involvement of key performers (cast, directors, etc).

And the government culture ministry, which oversees treaty co-productions, is both active and vigilant. This body works regularly to improve them so they’re very streamlined and easy to deal with.

“That makes us very good partners,” Platt pointed out.

Most look to co-production with CBC for closing financing, “but we always tend to get what we want too, and what we look for are programs that have resonance with Canadians –” including programming with elements of the British monarchal tradition and that of France as well (for Quebec).

Big, interesting, international stories have special resonance. CBC was involved in both “The Tudors” and “Camelot.” (Curiously, “there is no treaty co-production with the United States,” – they co-produce but do not treaty co-produce.)

As a final point, Platt attributed Canadians’ tendency to make their interests very clear at the beginning of a relationship, a value the BBC’s Nick Betts echoed.

“Have absolute clarity on what it is to wish you do, and what it is your partners wish to do … [otherwise], there is more chance for mischief,” warned Betts.

Pragmatic to a fault, Betts said the BBC is very granular about what programming can be co-produced: “these 13 hours of drama are co-produce-able, let’s prioritise that,” he said, by way of example, “whereas the rest may be highly UK focused.”

Screentape’s Monaghan was the third to stress the importance of defining explicit terms for international co-production, comparing it to a marriage that can be long and harmonious … or deceptive and painful. (And possibly still long.)

Screentime averages about one or two co-pros a year. Like the US, he was happy to report that Australia has also seen renewed interest in scripted programming.