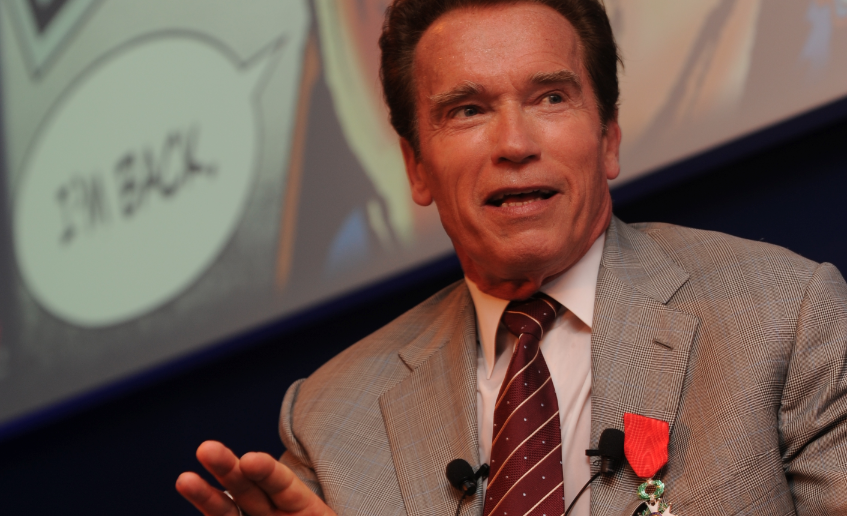 He's back! In the entertainment business that is, with a new TV series launched today in Cannes
By Stuart Dredge on April 4, 2011 1 Comment

Above: watch the conference in six handy chunks; watch it in full below!

Arnold Schwarzenegger’s path from entertainment into politics is well known: the former action hero recently finished a stint as governor of California. Now he’s trying to bring the two areas together with The Governator, a collaboration with legendary comics creator Stan Lee that’s an animated series for children.

Schwarzenegger held a press conference today at MIPTV to plug the new project – a collaboration between A Squared Entertainment, Archie Comics and Stan Lee’s POW! Entertainment – and field questions from journalists eager to find out why he’s getting back into the entertainment game.

“It’s wonderful to be back here in Cannes where I started my movie career,” he said. “Coming to Cannes for me is like going home… At a time when everyone was negative when I wanted to go from being a bodybuilding champion into movies, Cannes was different.”

He drew attention to the similarities between his two lives – politician and action hero – “in both cases, you need the people as your partners“. For entertainment, that means knowing what kind of projects people – be they film or TV viewers – are interested in watching.

“You will see more action in this series than you have ever seen before, but combined with comedy,” he said, stressing the family-friendly nature of The Governator. “This will not be a violent show. If you look at my movies, a lot of heads come off! That is not what this is.”

He also said that what makes The Governator special is the way it brings “all of my worlds together”, including politics, entertainment and sport.

How does it feel to come back into entertainment? “In the beginning you miss it,” he admitted. “Every 30 minutes there’s another appointment, and you meet some interesting people [in politics]. But he said that he’s looking forward to his new life, including spending more time with his family, and getting back into entertainment.

“I think that The Governator is a great replacement in a way. I was looking for, when I am finished with politics, to come up with something that would be a big surprise,” he said. “Everyone has been ‘wow, I didn’t expect that at all’.”

Schwarzenegger also said he was keen to make a series that had international appeal – he is selling it at MIPTV after all. “I think the people in Africa ought to be entertained as much as the people in America, or Australia, or Europe,” he said.

Schwarzenegger said that he didn’t feel pressure about getting back into entertainment, saying that the key is “not to look at the dollars, as in ‘how much money can I make?’.” Instead, he focused on his desire to work with the best, most creative people.

“None of us looks at this as a moneymaking thing. If it is successful, the money will come anyway… The most important thing is how can you create a character that no one has ever seen before?”

How involved was he with developing the story of The Governator? Schwarzenegger described it as “an explosion” of creativity, working across printed comic books, a TV series and digital – there will be a web angle, as well as spin-off games based on characters.

“This man is a genius,” he said of Stan Lee. “I’ve never ever met anyone like this… He has so much stuff going on in his brain, the mind works in a very unique way.”

The series sees the Governator character fighting crime after retiring from his political role, while avoiding nosy questions from a journalist – Larry King himself – who has a clue about what he is up to. Much of the comedy comes from the character trying to juggle his family life and crime-fighting exploits.

The comic books will be published this year, along with digital content, then the TV series follows, before the other spin-off content. And Schwarzenegger said there will be a big-screen movie ultimately too.

Will some of his political contacts be making guest appearances. “There will be some interesting guest stars coming into this series, yes,” he said, while keeping the details close to his chest.

Will Arnie go back into acting, as opposed to staying behind the scenes? “Yes I will be also in front of the camera, and I’m looking at many different scripts. We have somewhat held off with that because we really wanted to pay full attention to The Governator,” he said.

He also said that the comedic angle is important for The Governator. “I’ve always been the first person to laugh at myself,” he said, before summing up his career in characteristically glass-half-full style.

“I would not switch my life with anyone’s. That’s how happy I am with my life and what I’ve accomplished. It’s such an American success story in a way… I don’t think that anywhere in the world would I have been able to do what I did in my life if it were not for America… What I have achieved is just impossible. It’s extraordinary.”