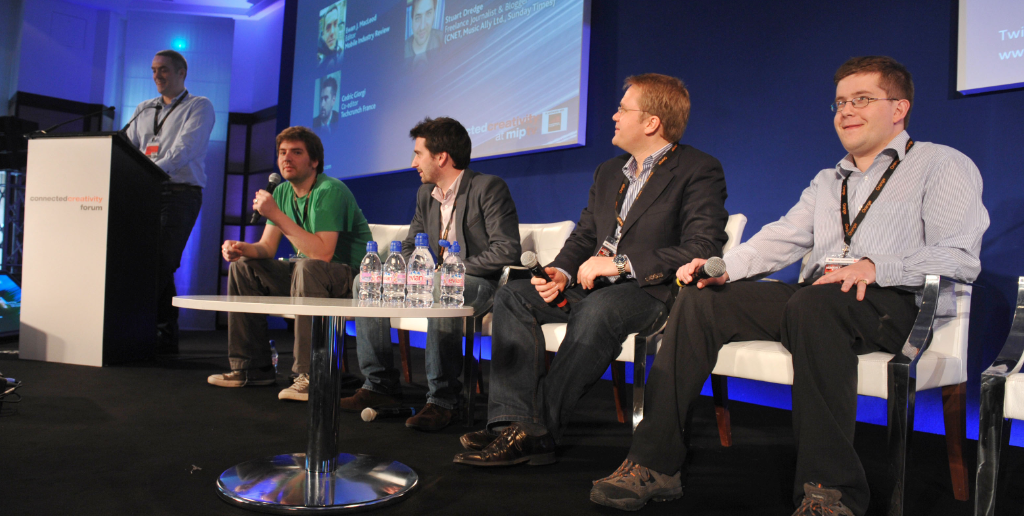 Bloggers and influencers resume the key trends of the Connected Creativity Forum
By Angela Natividad on April 7, 2011 0 Comments

This was fun. MIPTV’s new Connected Creativity segment wrapped up nice with a crowdsourced, somewhat Socratic event, where audience members in an intimate setting were invited to converse directly with stage members.

Things started out playfully with everybody throwing out buzzwords they’ve heard this week. “Innovation” is Smith’s pet peeve: “Next time you say it, go into a corner and think about your life.”

Dredge admitted to feeling weird about still hearing the word “consumers” flung out freely in the industry. “Just talk about people rather than consumers. I think that would be a very healthy thing,” he said.

Blandford, though, caused gasps in the audience when he said he hears “connected” way too much. But his position was certainly defensible: the fact that we’re connected goes without saying. It’s like breathing. We don’t need to talk about it anymore.

On innovation in the TV industry, Smith said that those likely to be most successful will “see past the constraints of today” – this idea of licensing to a broadcaster in a given geography.

“People who look at the ideas or interactions that emerge, [consider]the idea that your content can be shaped by [them]… that’s where successful content producers will have their best ideas.”

“There must be a way of reducing the friction,” Blandford mused. “I’m not sure I’ve seen [innovative ideas]transferred over to production” which still seems married to its old model.

Blandford later arrived at a really neat idea. He said the time is coming near when we’re going to see a good TV show, canceled by network politics, get “saved” by microfinancing via fans.

We started jamming then, talking about shows we like: Buffy, Stargate: Universe, The Connor Chronicles.

Asked where such a “saved” series would live, Smith blinked with surprise and said, “I think we take it for granted that they’ll just be online. Available to all.”

We’ll keep them in the cloud, Brandford agreed, although he pointed out that hardcore fans would be willing, maybe, to pay once for access to something and then forget about it.

Disruption was the last big topic, and Giorgi and Dredge kicked that off nicely by talking about how curation is giving content a new and different life (Giorgi), and how experimentation and curiosity will really aid the production industry in finding new ideas, remaining open (Dredge).

“I think there is a danger of labeling something as disruptive when it’s not,” Brandford mused by way of closing.

“But I think subscription models where you can pay $10 for all the TV, music, movies you want in a month, is the next big disruptive thing for me.”