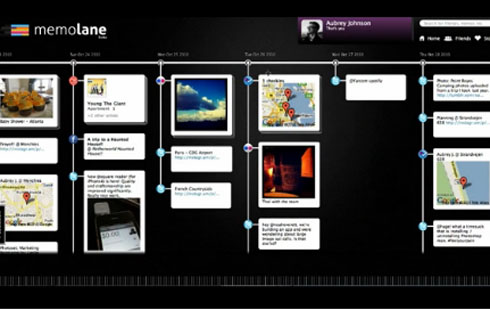 Social Media has become a big part of the average user’s day-to-day. Whether it be Twitter, Foursquare or Facebook, there is always something that has been recently developed which continues to enables us to stay connected. However, as social media platforms become the sites where the world’s population spends most of their web surfing, the question is now: what tools have been created around these different platforms to ensure we make the most of them?

Memolane is a personal favorite. It is a new site (still in beta development), that allows its users to track all their social media history for the particular sites you input. Think of Time Machine from Apple but with a social media focus. For example, has there ever been a specific photo out of a thousand on Facebook that you’ve tried to look for? Memolane gives you that chance to “See, Search and Share Your Life.” A real pleasure in this ever-evolving space. I think this idea will become the perfect filing cabinet for any and everyones social media profile, and it will be interesting to see if sites like Facebook and Twitter develop their own alternative.

I first saw this while at this years SXSWi. VectorFormat and Foursquare decided to join forces to create the Foursquare Playground. This virtual world shows all the locations around you and their popularity. Do not get confused, this is not another version of Google Earth or Bing Maps. This fun environment shows the potential check-in areas around you and its most popular spots. When a building and/or event is the most popular within that given area it will be shown as one of the tallest buildings. But if that wasn’t cool enough, one of my personal favorites is if you click a specific building you can see who else is there, who’s mayor and what tips have been left by others. I think this will allow more users to check out Foursquare and the environment around them as an alternative to their smartphone, because right now unless you are updating your Foursquare avatar there is not much of a need to visit their site from a computer. I think this creation will ultimately begin to lessen the gap for them between Twitter and Facebook.

These two tools are some that I hope to take advantage of at MIPTV and Connected Creativity next week. One I’ll be able to see who and what is around me, and the other will give me a chance to reflect and categorise my time over there through Twitter and Facebook. More soon!