MIPBlog: Why is Camelot such a big event?
Craig Ceigelski: It’s our first episodic series. We’re looking to bring to the market shows that lend themselves to coproduction. It’s produced by the team behind The Tudors; its composers made the music for films like Little Miss Sunshine; and Starz, our US network and distributor, have been an incredible partner, both creatively and financially. I can’t have been happier to work with creative executives like (Starz CEO) Chris Albrecht.

How did Camelot come about?
Its actual genesis was quite fortuitous. Usually, we demand that shows fit in with our business model and creative vision. But in January 2010, Morgan O’Sullivan, executive producer of The Tudors, came to me with this project, written by The Tudors’ Michael Hearst, about Camelot. The very next day, I told him I was in. And a week later, Chris Albrecht had made it his first original commission for Starz. Now we’ve got a new writer, whose given it a more contemporary sensibility; but the basis remains Thomas Malory’s book (La Morte d’Arthur, the original tale of Camelot).

How did it work as an international coproduction?
International coproductions can be very tricky. You need the right partners to get the right show. So looking at the example of The Tudors, working with (Ireland’s) Octagon Films made perfect sense. They brought with them their infrastructure and incredible talent pool which allowed us to assemble a crew that had cinematic, but also high-level epic televisual experience (including the editor of The Sopranos and Boardwalk Empire, for example). In terms of broadcast partners (and investors), Ireland’s RTE, Canada’s CBC and Starz for the US all came on board.

They shared the idea of measured risk whilst avoiding cutting corners and make a low-cost production. International coproductions can often skew your mindset to try to find financial reasons to go forward with the project. Soon, you’re trying to produce the show within the constraints of a specific P&L, instead of trying to create a show you know will resonate with the audience. So we started with the script, and we built the budget to the scope we wanted: we didn’t reverse-engineer it, which is often the case.

Often, coproductions are the local producers who couldn’t finance everything themselves and are looking to close the gap. We instead wanted partners that would enhance the project, and fortunately we found them. We have a bold, cinematic series to show for it.

Why did you choose Ireland as the location?
It was the setting for John Boorman’s Excalibur, and was to be made in the same studios as The Tudors, so that started ticking the boxes. Of course, you can look at tax incentives; but in the end, we made an elegant balance between our balance sheet and what’s onscreen. 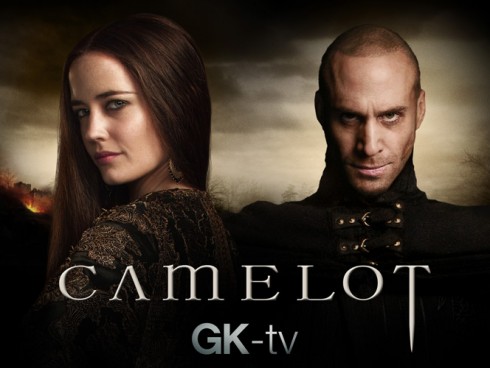 This telling of the legend of King Arthur seems darker, more realistic. Was that intentional?
We’re not saying it’s a darker take on the story. What we’re saying is that had he existed then, Arthur’s world was dangerous. In the sixth century, just two generations after the exodus of Rome, Britain was mired in the dark ages. So when Arthur is told he’s going to be king, Merlin takes him to Camelot — a Roman ruin — and tells him he will be the greatest of kings, the once-carefree Arthur is thrust into defending a world he inherited and mending a relationship with a half-sister that is revealed to him — Morgan — who is obsessed about taking the crown from him. Plus there are dangerous things in the woods, plague is just a whisper away…

Joseph Fiennes’ Merlin inparticular seems like a deliberately anti-stereotypical wizard; and there don’t seem to be many special effects…
It was Joseph’s idea to create Merlin as a warrior-monk type, who has a pragmatic take on the future. He has great elemental powers, but using them takes a great physical toll on him. So when we meet him, he has sworn those powers off. Given that, it’s hard to imagine a bearded, pointy-hat type figure getting anything done in that age. You can’t imagine someone 80 years old getting anything done then: life expectancy was around 50!

There aren’t many special effects; but we’ve only got four episodes done so far, so we’re focusing on the equivalent of the first 100 days of a presidential election. Monsters and dragons seemed like a superfluous parlour trick at this stage. It’s always been more of a love story between Arthur and Guinevere, and the damage Morgan does to him. So it’s more like an epic tragedy at times.

Was it difficult getting Fiennes and Eva Green (Morgan) on board?
It was tough! With Joseph, Flashforward was still shooting during the Camelot casting process. But I was thinking of how he made Shakespearean nuances seem so contemporary in Shakespeare In Love, and knew he would be the perfect Merlin. So the moment Flashforward was cancelled, we told our casting director to get on the phone with his agent! But yes, it took some conversations. Eva, on the other hand, is a film actress. So that took some time and some listening. She’s never done a TV series. So locking in someone like that for five years (the objective is ten episodes per year) is quite a coup. It notably took a lot of conversations about how we were going to present the show. You don’t just lob in an availability request to Eva Green! We got on the plane and met with her…

So what’s next?
We basically got all of our financing partners secured at MIPCOM and MIPTV 2010. Signing Eva Green was considerable proof of concept during that phase. That’s just one of the reasons people bought in early; and I think they’ll be well rewarded when the ratings come out. So bringing the show to MIPTV’s International Screenings is a celebration of that. Dealwise, we’ll round out 100% of the world at MIPTV; but it’s really about celebrating with our broadcasters and revelling in the grandeur of the show with them. After all, Camelot is the biggest universal story; we all share it somehow!