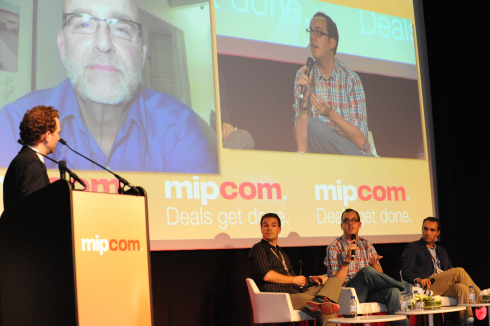 Channel 4, Orange, Ubisoft and The Opportunity Company on cross-platform projects.
By Stuart Dredge on October 4, 2010 2 Comments

One of the most anticipated sessions at MIPCOM today was the Transmedia Content Show & Tell, not least because it dealt with real case studies, not just theorising.

McGarry kicked off with a definition – from Wikipedia, naturally – saying it’s storytelling across multiple forms of media in order to have different ‘entry points’ in the story.

Or, as transmedia luminary Jeff Gomez has described it more simply: “Two platforms and dialogue with the audience“.

Hurst was the first speaker, talking about the recent Conspiracy For Good project, which was created by Tim Kring (of Heroes fame) in partnership with Nokia and The opportunity Management Company.

It started as a story told online, before evolving into a series of four events in London this summer, with an alternate reality game (ARG) built around them. Actors interacted with players as they ran around the city following clues.

Next, Ferland talked about what Ubisoft has been doing with its Assassin’s Creed game franchise, which has sold more than 15.7 million copies across its two console versions.

So how? The third Assassin’s Creed game – Brotherhood – will have a Facebook game, a mobile game, and an “unnanounced short film that should be announced shortly”, along with a novel, art-book and comic.

“All of these have been produced internally, although with some we’re going with partnerships for distribution,” he said, showing clips of a live-action film using scenery originally created for the game.

Next up was Jody Smith from Channel 4, who talked about Misfits, which started life as a linear comedy drama, and was then developed into a broader online project, which in turn involved rewriting parts of the drama to fit the digital aspects.

Which were? A Flash game seeded across the web to introduce people to the Misfits characters, as well as videos, storyboards and other content made available during the TV broadcast.

Twitter and YouTube were also in the mix, while a character called Super Hoodie even had his own Facebook presence. Channel 4 also worked with – yes – Nokia on an alternate reality game.

McGarry asks Smith if anyone ever tried to hijack the process. “Not really,” he said, although he talked about one challenge in the upcoming series, where viewers will find out about an incident before one of the characters do – “will they go to his Facebook page and tell him?”

An important quote when asked whether Misfits fans could change the storyline: “I believe people want to be told a story. Allow them to interact with that, but not change it.”

Finally, Orange’s Rodriguez talked about what his company is doing in transmedia. “We think we need to explore this new way to consume media, because they will use our network and our telecommunication tools.”

He also unveiled a new transmedia project, launched around a book. It’s based around a book called Fanfan 2, which came out last year, but is coming out in paperback on 27th October.

“It’s continuing the story online, on social networks and on the mobile telephones,” says Rodriguez. “This is really a written transmedia project.”

The app is interesting – users will get the story, but also access to the central character’s emails, text messages and voicemails. However, next February the project will broaden out to encompass location-based tours in the real world.

Another transmedia project being launched by Orange is Detective Avenue, which will go live in Q2 2011. It involves 80 video episodes, each two minutes long, mixed in with daily challenges, games, and social media features.

“It will be a very impressive series around the transmedia tools,” said Rodriguez. Orange is planning another transmedia project around something called The Prodigies, and a fourth unnamed project in partnership with a games developer for late 2011.

The session then moved to Q&A, starting with monetisation. How do these projects make money? Smith said that for Channel 4, creating an online buzz among fans is good for sponsorship and advertising.

Nokia signed on to sponsor the show itself. “All of the digital stuff we’re doing made sponsoring the show much more attractive for them,” said Smith, who also claimed that Nokia’s Misfits app smashed its download target by 15x.

Hurst also talked about how projects like Conspiracy For Good can attract sponsors, especially when they have real-world events where they can get players to go to certain places – including retailers.

Ubisoft’s Ferland admitted that his company still makes its money from sales of games, but agreed that there are sponsorship opportunities around real-world and online events.

The panel also chewed over the definition of transmedia, although Channel 4’s Smith took a down-to-earth attitude: “I don’t really know what transmedia means… it’s not about platforms, it’s about telling a cracking story.”

Another question focused on how smaller companies are getting financing to take a transmedia project to the point where brands will get involved.