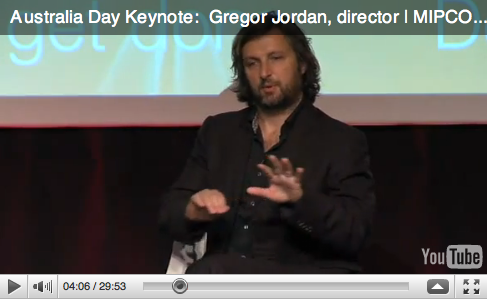 Spotlight on Australia kicks off with global transmedia project.
By Stuart Dredge on October 5, 2010 0 Comments

Today’s spotlight on Australia at MIPCOM began with a keynote from Gregor Jordan, director and screenwriter of Ned Kelly. He’s here in Cannes to launch an innovative new transmedia project called Smashcut.

Jordan is working with The Project Factory on Smashcut, and that company’s director Guy Gadney interviewed Jordan for the keynote, which broadened out beyond that specific project to the wider impact of digital.

“Film-making is changing a lot at the moment,” said Jordan. “A lot of the old institutions are closing down… A lot of film distribution companies that I was involved in when I first got involved in film-making are now completely gone. Digital seems to be the next thing, but people in the film industry are trying to work out how.”

Smashcut was originally conceived as a way to show dramatic content as webisodes. “Why not put the raw footage up there – just the raw dailies – and allow people to create their own edits?”

Users could then post those edits back onto the Smashcut site for other people to watch.

Jordan took the idea to Screen Australia, which seed-funded the project through its Innovation programme, while putting Jordan in touch with The Project Factory to use its technology for the video-editing part.

Since then, the project has evolved: Jordan is working with Universal Music Group and its artist Powderfinger – a huge rock band Down Under – to do similar things with footage of the band’s live gigs.

“At the moment we’ve just got the Powderfinger footage on there, but we’re talking to Sony Music and they’re going to give us short videos to load on,” said Jordan. However, he says Smashcut is as useful for short films, TV shows and even adverts.

“YouTube is obviously fantastic in that it’s opened up this whole new world of content to people all over the world… but the thing YouTube lacks is really access to high-quality raw footage, and obviously it lacks an editing tool,” he said.

Jordan admitted that the only think lacking from Smashcut at the moment is content, which is why he’s at MIPCOM, talking to producers and broadcasters about getting their content onto the site.

“Who’s to say, for instance, you couldn’t have people out there cut the trailer to American Idol, or edit the new series of a TV show like Mad Men? Post the dailies up there and let people create their own versions.”

Jordan was also asked about his experience of digital piracy, with his last film, Unthinkable. It leaked onto BitTorrent several weeks before its release in the US.

“This is a problem that’s not going to go away: it’s going to get worse and worse… it used to be a little bit mysterious to get onto those BitTorrent sites, but the mystery is now gone.”

Jordan accepted that “if you want to do business with them, you have to do it their way”, and pointed out that content owners are getting “bombarded” with ideas from digital startups looking for deals.

“We were fortunate to have Powderfinger and their management on our side, to put a gun to their head and say ‘make this deal, or we’re gonna get upset with you!’,” he said about Smashcut, suggesting that if he had not had those contacts, a big label like UMG may well have sent him packing rather than strike a deal.

However, he came back to the idea that Smashcut is about the “desire to create” on the part of its users, which he hopes recaptures the excitement he felt at the start of his career.

What about the revenue models for content providers? Do film-makers need to understand far more about the business element than before?

In a word, yes. “Over the last couple of years, the corporatisation of film-making is really everything, and film-makers embrace that or perish,” said Jordan.

“It is a sad fact, or whatever, but there is always some sort of sponsorship element involved in film-making. If you’re trying to make a Hollywood movie nowadays, the very first question you get asked is ‘how can I market this?’. They plan the marketing campaign then green-light the film afterwards.”

However, he was saying this not as a complaint, but more to illustrate the fact that film-makers are already having to be commercially savvy – so the barrage of new business models involved in digital content is not as intimidating as you might think.

Jordan was asked about the impact of devices like iPhone and iPad on Smashcut, and film-making more generally.

“Smashcut is Flash-driven, so I guess it precludes iPads and iPhones at the moment,” he said. “We need a certain size screen too, I can’t imagine cutting together a video on a small-sized screen! But you never know…”

At this point, Gadney jumped in, saying that for this kind of technology, new devices like smartphones and tablets are very much part of The Project Factory’s roadmap.

Jordan was also asked about ownership of content on Smashcut. “The content providers are going to retain full ownership of everything, and any form that content then takes will still be owned by them,” he said.

So, for example, UMG owns all the Powderfinger mash-ups made by Smashcut users.