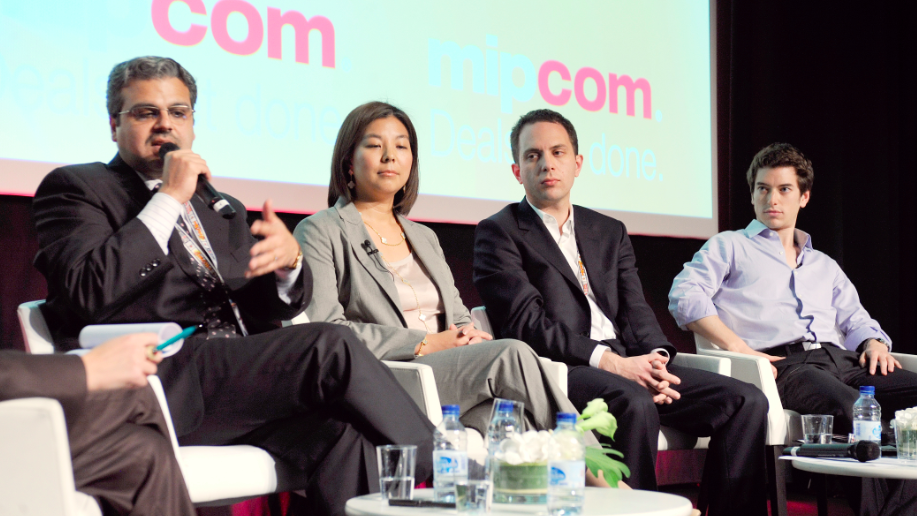 Everyone's app-happy at the moment, but are apps genuinely making money for media and entertainment brands?
By Stuart Dredge on October 6, 2010 1 Comment

As such, revenue generation was the subject for the final panel of the afternoon at MIPCOM today. The panel was moderated by Ingrid Silver, partner at SNR Denton. The panellists were (l-r):

Schneider kicked off with a presentation – and a big number: there are now more than five billion mobile phones out there in the hands of consumers. More than 120 million people are on iOS devices – iPhones, iPod touches and iPads.

He explained that iPhone users spend more than 30 minutes a day using apps, and that Google is selling 200,000 Android smartphones a day – up from 100,000 six months ago.

“There are four people born every second on the planet, and 39 mobile phones sold every second,” said Schneider.

He also talked about engagement numbers – Nokia has 44% of global handset market share, but only represents 24% of app usage. Yet iPhone has 15% market share and 40% share of app usage. So it’s more complicated than who has most handsets out in the wild.

Schneider also talked monetisation on iPad versus iPhone. “Rich media video ads have a 10.7x higher click through rate on the iPad than the iPhone,” he said, while also saying iPad apps on average have a 5x higher CPM – cost per thousand for ads – on iPad than iPhone. “There’s a lot more money here.”

He also outlined the paywall strategy of the Wall Street Journal, whose iPad app offers certain content for free, but keeps the richer media and detailed stories for paying customers.

“Next year, it’s estimated that there will be 50 million tablets sold, so this is a real market with real numbers,” he said.

The session now shifted to the panel discussion. Vodafone’s Madan said that there are a lot more ‘engaged’ users out there, and that “the opportunity of rich content distribution is not limited to the iPad – it is also a much bigger opportunity in the smartphone segment overall“.

Vodafone has launched its own app store for Android smartphones, but Madan said that this is not the first venture of this kind. “We’re coming out for Android devices soon, followed by RIM next year”.

How does Vodafone compete with Google’s own Android Market, though, since it’s also on those Android handsets?

“We do co-exist with the Google Market, but in the devices selling in the Vodafone channel, the Vodafone shop is on the homescreen,” said Madan. “Also, being an operator, we understand the consumer’s behaviour in the portals a lot better.”

Jelley talked about how Sky News is working in the apps space. “Our key motive is always to try and give value to our subscribers,” he said. He said that Sky’s iPhone app has now had two million downloads and 700,000 weekly users – “and a lot of those are our subscribers”.

However, looking forward, Sky wants to go further. Its iPhone app merely pulls information from its website, but on iPad Sky sees the opportunity to create new forms of content that are optimised for a touchscreen device.

“This is not only a way of getting much more rich media onto these platforms that are absolutely perfectly suited to them,” he said.

“As a producer of news what we’re interested in doing is saying here are lots of rich and interactive ways of consuming content.. The iPad app we’re going to launch in the first half of next year will be very video and graphics intensive in a way that other news apps aren’t.”

Moderator Silver challenged the panel to talk about some of the problems – rights management, user experience and piracy.

Madan said that content like games tends to come from established publishers, but that opening the doors wider with app stores for many more developers to launch their apps brings more challenges.

Park-Dionisio said Disney sees apps as a key way to keep in touch with its consumers. She also said that Disney is not scared of potential cannibalisation by digital of physical products – for example it has re-released deleted books in digital versions, to find a new audience.

“It is definitely a revenue opportunity, and not a cannibalising one. The company knows overall that this digital environment is where consumers will migrate to over time.”

Jelley said Sky is focusing strongly on changing the way it produces its content, to be ready for the next wave of evolution in consumer habits. “There are different expectations on a red-button service, to an iPad to an iPhone,” he said.

Sky sees “incredibly high” engagement on its iPhone app – “it’s a third fewer people using it every week than the website, but viewing about as many pages as those web users“.

Someone from the audience asks what makes a successful app in terms of download numbers? Schneider said “there’s no standard or good metrics yet to measure success. If you’re making money, you’re successful!”

He said that Mobile Roadie’s biggest app is for country-pop star Taylor Swift, which has had 600,000 installs in the US.

Park-Dionisio agreed that it is hard to measure success in terms of volumes, but said it’s important to have an ‘ecosystem’ – “the most successful publishers are able to create their own community from the purchasers of their apps… engagement is a really important metric, it’s not just about the number of downloads.”

Or, to put it another way, when you have millions of people who have loved your previous apps, you can ping them all when a new app comes out, and have a ready-made audience.

App store owners are increasingly keen for brands and developers to make apps ‘bespoke’ for their platforms – using their special APIs and taking advantage of their unique features. Does this put pressure on brands and media owners to spend more developing different and/or exclusive apps, rather than making one and porting it?

“We’re about to announce a relationship where you will get perks if you’re exclusively on one platform for several months,” said Schneider, but he warned that it would be “crazy” for a developer to make their app fully exclusive to one platform.

The panel were asked about how much apps actually cost to develop. Park-Dionisio gave a range of between $15,000 and close to $1 million – “to be fair those are your FIFAs, your Need For Speed type games that are appearing on iPad and iPhone.”

Jelley agreed that some iPad apps are “not that far off a website in terms of the scale of the ambition” – so they cost about as much to develop as developing a website.