Day 1 delegates heard about the origins of Squid Game, the latest trends in formats and the winners of the MIPDOC Pitch.
By Julian Newby on April 5, 2022 0 Comments
Squid Game creator Dong-Hyuk Hwang

Squid Game: ‘I wrote it and people liked it’

SQUID GAME director/writer Dong-Hyuk Hwang is one of the hottest properties in global content right now. So hot that Hollywood legend Steven Spielberg threatened to “steal his brain” during a chance encounter in LA. Speaking to MIP delegates at the session Squid Game – The Interview, Hwang said: “That was the biggest compliment ever – because he has been my film hero for decades.”

Hwang wasn’t always in demand. “I wrote Squid Game as a film in 2009 but no one liked it. I had no way of making it. I kept it in the hard drive because I knew its time would come. But it wasn’t until I met with the people at Netflix in 2018 that the idea finally got an investor — as a TV series.” 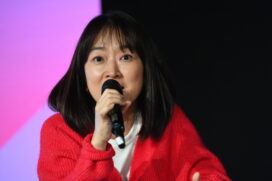 Squid Game’s central character is a penniless gambling addict who is being pursued for money by local hoods. That feeling of having no money fed into the origination of the idea “because at that time I was broke,” Hwang said. “I remember only having five bucks in my account and trying unsuccessfully to draw 10 from the ATM.”

A key element in the series is that competitors have to play children’s games to win a large sum of money. “I was thinking about making something that involved a survival game,” he said. “But I knew I would lose most of the games that are shown in comic books or films. So I came up with the idea of something I might win — like children’s games.” 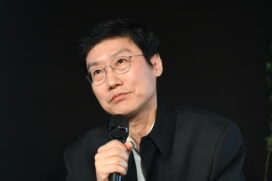 Alongside Hwang in Cannes is the show’s producer, Ji Yeon Kim of Siren Productions. She read the film script in 2016 and “really liked the idea that people were playing life or death children’s games for money. I also liked the fact that the characters are normal people.”

Asked about the secret to his success, Hwang said: “There is no secret. I wrote it and people liked it.” As the world waits, he is now writing season two. “It’s giving me sleepless nights,” he said. “Creating a TV series is endless. Maybe Squid Game 2 will be my last TV show!”

ALWAYS a popular figure at MIPTV, The Wit CEO Virginia Mouseler outlined the latest trends in entertainment and scripted formats to a packed auditorium on Monday lunchtime. In a touching introduction, she ran some footage of Ukraine President Volodymyr Zelenskyy in his previous career as a famous TV personality. 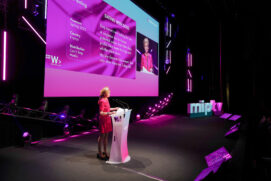 Then getting down to business, Mouseler said the top-five most-sold formats of the last six months were Got Talent, King Of The Masked Singer, I Can See Your Voice, Lego Masters and MasterChef. Among new projects gaining traction she identified City Versus Country, Race Against The Tide, Sort Your Life Out and Love Raft. Top format suppliers over the period included Banijay, Fremantle and All3Media, while the top exporting nation was the UK.

In terms of trends, Mouseler identified some interesting new launches in the dating/relationship category. “There are several shows where the daters are more like game players than lovers. They are like a combination of daters and actors.” Mouseler cited the example of Dating Like The Stars, a UK show where contestants re-enact famous romantic scenes from blockbuster films, for example the pottery scene in the movie Ghost.

Mouseler also identified a rush of dating shows set against period backdrops. These included Back To Love, Palace Of Love and The Courtship. Another trend picked up in her session was relationship shows that reflect people’s lifestyles. These included Dating With Dogs and Fitness First. There was also an inter-generational dating show, with young people secretly observing as their single parents find new partners. Called My Mom, Your Dad, this is an ITV Studios format for HBO Max that has also been licensed by Network Nine Australia. 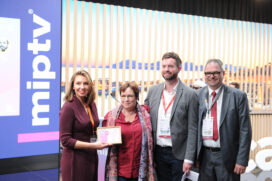 OPENING the MIPDOC Project Pitch on Monday, Cecile Olsen, senior vice-president, global content, non-scripted at ITV Studios, revealed that here were 111 entries to the competition from 27 countries. “The entries were then judged on the basis of their originality, quality, and authenticity, plus their potential global appeal,” Olsen said, before introducing the expert jury: Caroline Behar, head of international co-productions and acquisitions at France Télévisions; Jack Oliver, head of co-productions at Sky Entertainment; Mikael Osterby, head of factual acquisitions at SVT; and Kristina Hollstein, director acquisitions and co-productions, for documentaries, children and youth at ZDF.

The first pitch, from Travel Media House, told of a double-amputee with only three fingers who decided to climb Mount Everest. “It’s a unique and inspiring story that gives hope and motivation to people with disabilities,” Hollstein said. “It’s moving and inspiring at a time when that’s what we all need.”

The other five finalists were Finding Aisha, Life At 10 Billion, The Margay And Me, Murky Skies and Overbooked.

The winner was wildlife adventure show The Margay And Me, a co-production with ZDF and Blue Paw Artists, which the jury praised for its originality and dynamism. All the judges admitted to having had a very tough time to pick the winner. “The standard was extremely high and everyone here today deserves praise and respect for their projects,” Sky’s Oliver said.