MIPTV Conferences focus on the future

Our team reports from some of the packed conferences sessions on day one of MIPTV.
By Julian Newby on April 4, 2022 0 Comments

The MIPTV conference programme kicked off on Monday morning with a session looking back at the TV viewing habits over the last 12 months. It continued with a wide range of subjects including the metaverse, future trends in TV content, and formats protection. Our team reports from some of the packed conferences sessions

One TV Year In The World: Cracking TV Audiences

MIPTV delegates heard a broad range of insights into global TV trends in the session One TV Year In The World: Cracking TV Audiences. Presented by research group Glance and its sister company Tape Consultancy, the session covered the rising impact of on-demand viewing, top show launches and the growing influence of gaming franchises on TV production. 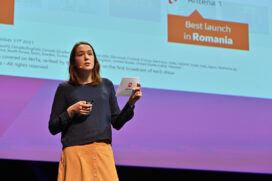 The session was kicked off by Glance vice-president Frédéric Vaulpré, who said total TV viewing increased in more than half of European countries from 2019 to 2021. A key trend he observed was a growing tendency for pay-TV platforms to behave like on-demand services — by giving new shows a pre-broadcast preview window. He also noted a shift from ad-free to ad-supported streaming among US consumers.

Avril Blondelot, head of content insight at Glance, discussed scripted and unscripted trends across 32 countries, from 2021 to Q1 2022. She said: “Two out of the top-three launches came from the fiction genre.”

Period drama and scripted series with strong female leads fared well. In the latter category were shows like HIP (TF1 France), Lolita Lobosco (RAI) and Kolleginnen (ZDF Germany). In unscripted, The Masked Singer, I Can See Your Voice and Game Of Talents were prominent.

Beatrice Rossmanith, managing director, TAPE Consultancy looked at TV shows based on games and gaming. “Paramount+ (Halo), HBO (The Last of Us), Sony (God of War) and Peacock (Twisted Metal) all have series based on gaming franchises,” she said. “There are strong characters and narratives. But the CGI, graphics, and first-person POV in these series also makes you want to reach for the controller.”

KICKING off FRAPA’s annual Formats Summit, Jan Salling, head of BBC Studios Nordic and FRAPA, spelt out the importance of the event: “We want to keep FRAPA relevant and useful as possible, and networking events like this are an important part of that,” he said.

Salling’s introduction was immediately followed by a discussion about the rise of international co-development and co-productions.

Joe Mace, commissioner and entertainment commissioning, ITV Network gave an example of exactly that sort of networking-based synergy that can result in a hit show: “I was discussing an idea with [Small World CEO] Tim Crescenti and he got it straight away. His help in putting a strong format idea with a good producer made the process of turning that idea into a show as smooth and fun as possible, and that idea became the series Glitch.”

Jin-Woo Huang of Something Special pointed to an essential element of successful co-productions: “It’s important to have a clear objective. That way you can really take advantage of the differing ideas and angles, without losing sight of the ultimate objective,” he said.

All3Media’s executive vice-president formats Nick Smith agreed that cultural differences can enrich a production: “They can really make an idea work. There’s so much added value in having people from different cultures contributing elements that together can make something utterly unique.” 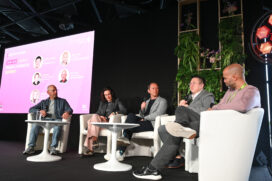 Mayer, a former Walt Disney executive, is building a next-generation content studio through a series of high-profile cross-genre acquisitions. Explaining the rationale for the Moonbug deal, he said: “I had known René for some time. When I learned he was heading a creator-led, audience-first, multimedia-focused studio it resonated with me. At Candle, we are all about taking great IP and putting it on as many platforms as possible to increase relevance and monetisation.”

A key strength of the Candle model, he added, is independence. “With the main studios seeking to control all of their content for use on their streaming platforms, the only place they can get shows is either in-house or from independents — not from each other.”

Rechtman explained how Moonbug uses data algorithms to identify kids IP with the potential to become a global franchise. He cited the example of Cocomelon, which has grown from being a YouTube channel to also being a hit series on Netflix and a major merchandising property. Rechtman stressed that Moonbug is keen to instil positive values in its programming: “We are all about compassion, empathy and resilience. We want to empower kids to develop life skills.”

‘The metaverse is far from a finished article’

THE READY Player MIP: Making Youth TV Brands Metaverse Ready conference session, revealed some fascinating facts about what is known as the metaverse using Dubit Trends youth research. “We’re seeing events such as The BRITS Awards, The Grammies and the Nickelodeon Kids Choice Awards taking place in Roblox,” senior vice-president, global trends at Dubit, David Kleeman, said. “And for us at Dubit, the thing that’s looming on the horizon is ethics and safety standards in the metaverse. We absolutely have to get those right, otherwise a bad reputation will stick for a long time.”

As Reed Hastings of Netflix said recently: “We are much more in competition with Fortnite than we are with HBO, and we lose.” What he was really saying is that the screens that matter most to the youth of today are those of their phones and tablets, with the TV being reduced to ‘that box in the corner of the living room’ status. 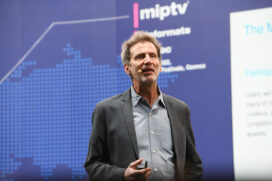 “The average age of kids getting their first smartphone these days is eight, and weekly average use of phones is around one day per week, rising to close to three days in the US,” Kleeman said. “But that statistic is somewhat misleading as it takes into account multiple and simultaneous screen use. For example, doing homework on a PC while also chatting with friends on their phone.”

In conclusion, Kleeman said that the current metaverse is far from a finished article: “Right now it’s in pieces in different places, but what it’s leading to is a place where you play a game, or make a game, socialise, learn, shop and create. The toughest thing for TV industry is going to be adapting to brand crossing. Brands are going to have to become more flexible in order to participate and remain relevant to kids in the metaverse.”