Is it reality? Is it animation? No, it’s Total Drama. In 2006, Nelvana alumni Tom McGillis and Jennifer Pertsch were in the early stages of establishing their Toronto-based studio Fresh TV as a new force in kids TV production. They’d already had a hit series –  6teen – when “we got a call from Teletoon (Canada) commissioner Madeleine Lévesque asking us if we’d be interested in making an animation series with reality TV as the core concept”. And the result was Total Drama Island…

From that casual conversation, the Total Drama universe has grown into one of the world’s biggest tween animation franchises, developing a cult following in more than 100 countries. After an initial run of seven seasons (2007-2016), it was recently rebooted with a new 26×30 mins order. Along the way, it also spawned a spin off series called Totaldramarama, which has introduced the characters from the main series to a younger audience.

“Back then,” McGillis says “I don’t think Jennifer and I could really have imagined that Total Drama would become such a success for Fresh TV. We’re at a point now where we’re looking at all kinds of options for expanding the world into other areas.”

Aimed at eight-to-14 year olds, the first series, Total Drama Island, is a kind of Survivor spoof, set against the backdrop of fictional Camp Wawanakwa which is visited by 22 zany teenagers, all of whom are hoping to win a huge cash prize and their 15 minutes of fame. Just like their real-world counterparts, the various animated contestants compete in a range of brutal challenges and are gradually eliminated as the series progresses. All this plays out over 26 episodes and an extended finale.

The creative concept was led by Pertsch, who says:

“I locked myself away and thought up a whole array of different characters – contacting Tom to bounce ideas off him. Some were archetypal reality contestants, but I was also digging deep into tween and pop culture for inspiration. Once we had the cast, we then brought in a writing team to fill in the blanks…stories, jokes, crazy challenges and so on. A lot of them were people we had already worked with on 6teen.”

Organising physical production wasn’t a particular problem, because two of the co-founders of Fresh TV, George Elliott and Brian Irving, already ran a physical animation studio – Elliott Animation. Set up as sister companies, Elliott’s job was to handle production and visual development on the new series, while Fresh TV focused on developing new IP. More challenging was finding a way to finance the show – another dimension of Fresh TV’s remit. While Teletoon and the Canadian Television Fund (now the Canada Media Fund), had started the funding process, international financing was also vital to make the concept a reality. “Cake Entertainment came in as our distribution partner and started marketing the series,” McGillis says. 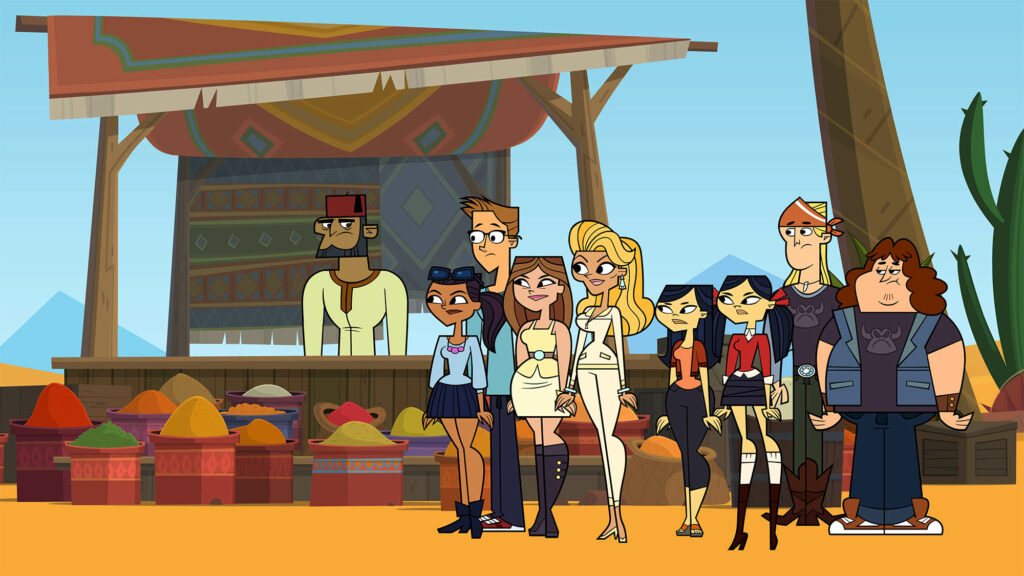 The initial contact was between McGillis and Cake co-founder Tom Van Waveren, another former Nelvana executive who left Cake earlier this year. In 2007, Cake’s current CEO Ed Galton joined the company and has been immersed in the Total Drama phenomenon ever since.

“When I first saw the series, I thought it was one of the most original animation concepts I’d ever seen. I loved the idea of spoofing reality TV and I loved the diversity of the characters. Somehow, Tom and Jenn had got inside the minds of children and created these hilarious teen stereotypes that the target audience recognised and connected with.”

But it wasn’t an easy sell at first.

“A lot of broadcasters liked the humour,” Galton says, “but there was definitely some trepidation about whether they’d be able to air it. The show needed a few brave broadcasters to get on board alongside Teletoon. The key breakthroughs came when Canal+ (France), Cartoon Network Europe and Cartoon Network US signed up to the show. Series one went on to be a top ratings performer for Cartoon in the US.”

With the success of the first series, a second season renewal came easily. But to keep the franchise fresh, McGillis and Pertsch took the editorial decision to make changes on a season by season basis. While the core characters remained the same, backdrops and challenges varied. Season two, Total Drama Action, was set on an abandoned film lot and involved movie-themed challenges. Season three, Total Drama World Tour, had more of a talent show feel to it.

“The show continued to do well and grow internationally,” McGillis says, “but at times we probably pushed it too far in new directions. It was at its strongest when it stayed close to the original Total Drama Island concept.”

The first two seasons of the show were directed by Todd Kauffman and Mark Thornton of Neptoon Studios, with Pertsch and McGillis taking on the role in season three. But as the property matured, members of the wider production team started to take on key roles. Keith Oliver and Chad Hicks, for example, assumed directing duties while Terry McGurrin embraced a story editing role.

“Terry actually started his career as a comedian,” says Perstch, “and is a well-established voice actor. He’s a key part of the Total Drama voice cast.”

Financially, the basic model stayed the same across the first seven seasons, McGillis says, “though domestic pressures meant Teletoon had to contribute a little less than initially. Fortunately, Cartoon and Cake were still heavily invested in the franchise and able to ensure it was sufficiently funded each season.”

In distribution terms, the franchise continued to rack up territories.

“After the first season, interest just snowballed. When broadcasters heard the ratings story, it racked up more and more 100 territories. And the great thing was that it worked almost everywhere,” Galton says. “There were very few buyers who said it hadn’t connected with kids – so it became a kind of self-fulfilling prophecy.”

The initial seven-season burst of the show finished in 2016, with a spin-off called The Ridonculous Race. McGillis says ratings had drifted towards the end but doesn’t think that led to the hiatus:

“I think the key factor in stopping the show at that time was the rise of the streamers and the changes that brought about in the market. But the good news was that we’d accumulated around 100 episodes for distribution by then.” Pertsch says the Fresh TV team was not especially troubled “because it had been a great run and the company was expanding. Our live-action slate had taken off with My Babysitter’s A Vampire and Backstage, so there was plenty going on creatively to occupy us.” 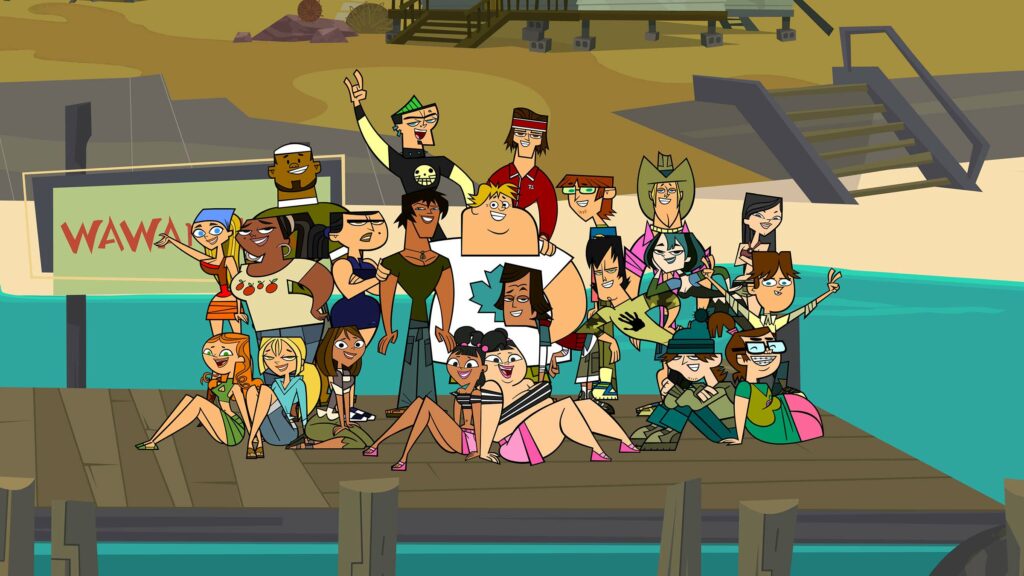 That might have been it for Total Drama, but Cartoon Network and Cake weren’t finished with it yet.

“Cartoon Network’s Adina Pitt (now with WarnerMedia Kids & Family) was a key champion of the show,” Galton says. “I was talking to her about the fact that Cartoon Network’s core audience was getting younger. She wanted to know if there was a way to reinvent Total Drama to reflect that shift.”

“We spoke to Adina in 2017 and she said she was looking for a surprising twist on the franchise, something out of the box,” Pertsch says. “So we gave her TotalDramarama, a series aimed at kids six-to-11. This time, we focused on 11 of our most popular characters as four year-olds… Teen Titans meets Rugrats. Instead of competing in reality TV shows, they were now in a day-care centre.”

Once again the show proved a hit, with Cartoon Network US and Teletoon the first to TX the show. Soon after, Totaldramarama rolled out across several more Cartoon territories and also did well in distribution. Among key pick-ups, Cake’s Galton says, were Canal + in France, K2 and DeA Kids in Italy, Super3 in Spain, ABC in Australia and Noga in Israel.

“The show was such a hit that it scored us a further two season commission (52 eps),” McGillis adds. “Perhaps the only thing we hadn’t anticipated was the social media backlash from fans of the original series – who couldn’t believe what we’d done to their favourites.”

The story took a new twist in early 2021 when it was announced that the original Total Drama Island concept was being rebooted for Cartoon Network and streaming sister company HBO Max.

“I think all of us felt that the original Total Drama Island series was the strongest concept – and that still tends to be the series that does best in distribution,” Galton says. In terms of the spark for the new series, “It’s a kind of [group]conversation that Fresh, Cake and Adina have been engaged in for years. We’re very collaborative and talk about this kind of thing all the time. Some 15 years after the original series, it felt like the right time for us to go back to Camp Wawanakwa. I think that decision has been justified by the very robust response we’re getting from buyers.”

While the core concept is the same, McGillis says there are two key differences this time around.

“Firstly, It’s not a Teletoon commission this time. It’s a Cartoon Network/HBO Max show that we have sold to Teletoon as our Canadian partner. Theoretically, that could make a difference to the show, but I don’t think it will. Cartoon and Teletoon both have the same kind of cheeky humour – which we understand very well – and because of that they give us creative freedom.”

The other key shift is in the composition of the cast and the nature of the challenges, which include extreme baking, TikToking, drag racing and disaster-and-horror-movie-inspired challenges.

“TV has come a long way since the first series of Total Drama Island, so this time around you’ll see much more focus on diversity and inclusion,” McGillis says. “You’ll see characters with cultural specificity, an amputee and an LGBTQ+ contestant. The one thing that absolutely won’t change is the irreverent humour that made the show such a hit.”

The emotional significance of the reboot is not lost on the various stakeholders.

“Total Drama Island is the most exciting show we’ve ever worked on,” McGillis says. “Bringing a whole new generation of campers to life is a dream come true.” Galton adds: “To date, the show has generated in excess of $30m at distribution. Fresh and Cake are both very different companies compared to what they were in 2007 – and a lot of that is down to Total Drama Island.”