Phil Schuman of FTI Consulting presented the MIPTV Online+ session Content Strategies In The Streaming Era, covering the broad subjects of “change and television”.
By Julian Newby on June 26, 2020 0 Comments

Phil Schuman, senior managing director at global business advisory firm FTI Consulting, presented the MIPTV Online+ session Content Strategies In The Streaming Era, during which he spoke about the broad subjects of “change and television”

“I miss the lobby of the Majestic and breakfast the Café Roma.” So began consultant Phil Schuman’s MIPTV Oline+ presentation – which, he hoped, would offer “a little distraction from the pressing issues of just getting through the shutdowns in our industry”, says Schuman

“Let’s talk about change and television. Change has been around as long as TV, but I’ve always found that my colleagues in the industry have the view that ‘Change is great, but just don’t change me’,” Schuman said. “Every major change in the television industry for the past 60 years has been met with fear. Back in the 1970s in the US, when HBO started, people were concerned that it would kill theatrical. It didn’t. When multichannel pay TV broke out in the 1980s as a mass medium, people thought it would kill broadcast. It didn’t at all.” Pay TV turned out to be “a goldmine for studios creating new rights windows for film libraries and syndication of popular broadcast series, driving massive new incremental revenue streams. It also paved the way for re-transmission fees for free-to-air broadcasters – an entirely new revenue stream that is projected to bring in over $12bn this year” says Schuman.

“Content will still be king. Again and again, we’ve seen that the new doesn’t kill off and replace the old, but grows the industry, creating more opportunity for everyone,” says Schuman

Those who embrace change consistently end up better off than those who can’t or don’t, Schuman said. The arrival of streaming doesn’t mean the end of the industry: “Content will still be king. Again and again, we’ve seen that the new doesn’t kill off and replace the old, but grows the industry, creating more opportunity for everyone,” says Schuman.

But the industry has certainly changed. At the start, TV was like a poker game with five to 10 players at the table, each with five cards, trying to bluff each other. Whereas today, for Schuman, the game is more like Scrabble where no one has enough pieces to win entirely on their own.

The streamers clearly have power: “Netflix can buy-out the world, so can Amazon, maybe even Disney at this point, but when they buy they pay well and take tons of risk out of the equation, unlocking opportunities for storytellers everywhere. By our count content spend by Netflix, Amazon and Apple alone in 2018 was over $30bn, much of it incremental increased spend in the sector,” says Schuman. 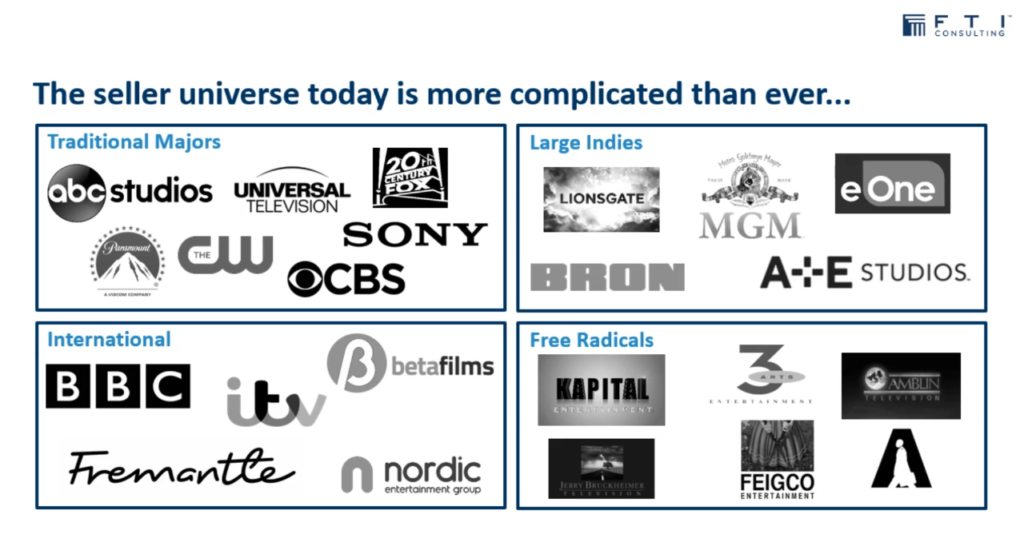 “The seller universe today is more complicated than ever. Gone are the days of a few big American companies dominating the premium content supply.” Today at one end of the spectrum you still have the traditional players – Disney, Warner, Universal, Sony and Paramount. Some of these are turning more focused inward, toward vertical integration; others, such as Sony and Paramount, are open for business to all comers. Next you have larger indies, including Lionsgate and MGM. In Europe, you have major players too – Fremantle and ITV Studios to name a few, along with the in-country-specific players such as Nordic Entertainment Group in Sweden and Beta Film in Germany,” says Schuman.

“The seller universe today is more complicated than ever. Gone are the days of a few big American companies dominating the premium content supply,” Schuman said.

Next there are what he calls “the free radicals” – anyone with an idea. “The streaming environment has broken down barriers to entry,” he said. “More or less anyone with a script can be a seller today as global buyers have come online opening new exhibition opportunities in many markets. Really, the entire world is open to new production and sales participants. The takeaway here: today, the content creation market is crowded and competitive and open.”“The seller universe today is more complicated than ever. Gone are the days of a few big American companies dominating the premium content supply,” Schuman said. 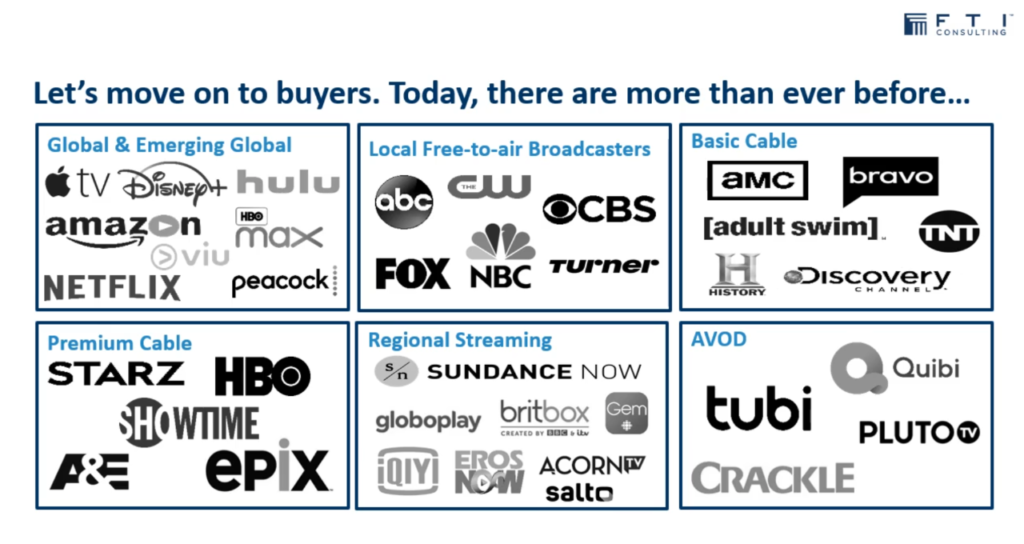 The good news is there are way more buyers than ever before. “And if you’re a seller, there are more outlets than ever.” But if you’re a buyer, especially from a legacy network, “you’ve never experienced more competition in your life. In the global category, we’ve got the major powerhouses Netflix and Amazon, maybe Disney and Apple. Those are already flexing their muscles in buying global rights to content,” Shuman said. But there are really only four of these today and Disney and Apple aren’t totally global quite yet. But then there are several potential emerging global services: “HBO Max, Peacock, Hulu, Disney, maybe Starz. These will likely bring demand, even if it is targeted to programmes they want to fill out from their vertically integrated content.”

Also buying content are the free-to-air broadcasters whose buying needs have changed dramatically as streamers continue to consume a vast proportion of the world’s scripted drama.

The pay-TV buyers – HBO, Showtime, Starz in the US, Sky Movies and Canal+ in Europe, for example – also have their own SVOD ambitions. And then there are the smaller regional streamers, “many of which can overlap with the traditional buyers”.

The AVOD services, whether 100% ad-supported, or working on a hybrid model, use extensive library content, “proving there’s still a market to generate downstream revenue on older and long tail content,” “The seller universe today is more complicated than ever. Gone are the days of a few big American companies dominating the premium content supply,” Schuman said. 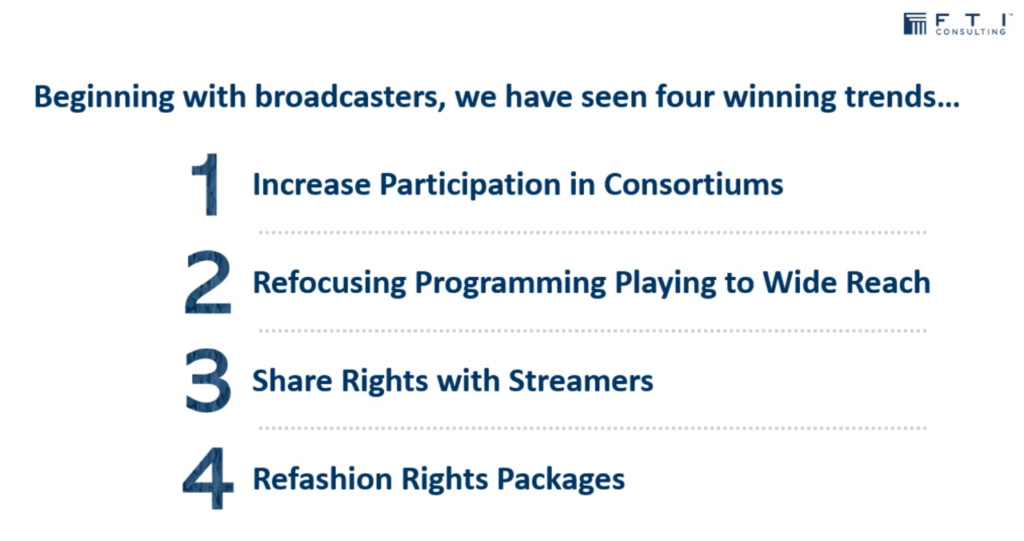 Moving on to content creation, FTI spoke to over 20 major players for this presentation and identified four key success strategies that are important in today’s market.

The first is the need to develop content in unique ways, to differentiate from the competition; the second, the importance of adaptable funding models; the third, the expansion of local production that also has potential internationally; and the fourth, the updating of existing rights deals to give a longer window to certain types of content.

“It is just critical in today’s hyper-competitive market of storytelling, with very low barriers to entry, that finding and securing differentiated source material and key behind- and in-front-of-camera talent, together with the talent-friendly production culture, is likely the winning formula that must be executed,” Schuman said. “We have been told that companies know they need to have an even keener eye than ever for veteran talent looking for a comeback, and emerging talent, identifying them on the upswing versus at the peak of their careers,” he said.

A talent-friendly environment is also important. ”Obviously, if people like working with a particular group of people, they tend to go there.” Some creators will not want to be tied to only one player, so it’s important to show talent that your company has the ability and mindset to place programming to many outputs. Offering shared equity in a show can also be key to attracting talent.

”Obviously, if people like working with a particular group of people, they tend to go there,” Schuman said

“The second, unsurprising strategy, that requires excellent execution is creating organisations that are able to sell to all comers, content tailored to their environment, using an adaptive business model and varying return on investment characteristics.” A related trend is to have in place financing for shows in advance of production, as opposed to traditional deficit financing with later syndication,” Schuman said. “This is a significant change in how people commission and sell product and this needs to be accounted for in an organisation’s readiness,” Schuman said.

The newest financing model for making new content is the “cost-plus model”, where the streamer buys all rights worldwide, funding the cost of production and the profit for the producer. The streamers will be very choosy here, however, because of the sheer amount of content they are being offered with this model in mind.

The third is the “If you can’t beat them, join them strategy of co-producing with the streamers. Among many examples, this could take the form of the broadcaster having the first window exclusively or not exclusively with the streamer,” he said. “We have also seen the streamers take it for rest of the world as well as a local window, or they will forego the local window, if that’s the demand of the local broadcaster,” ”Obviously, if people like working with a particular group of people, they tend to go there,” Schuman said.

The fourth of the key strategies that have demonstrated success in the streaming era is that of updating existing rights packages. “Given that consumers today are empowered with complete choice in the manner of viewing, we’re seeing broadcasters that are succeeding moving to accessibility for their viewers, by any means.” Schuman said. “In the UK, the BBC and Channel Four and recently struck deals with [regulatory body]Ofcom and producers respectively, to exploit the rights to their shows more effectively under catch-up services BBC iPlayer and All 4. This allows viewers to binge-watch box sets for longer, rather than shows disappearing after a short period.”

Another example to strive for is the rights deal Comcast and NBC Universal negotiated for the Olympics, taking all Olympic platform rights and those yet to be material materialised or ever even imagined. “With that kind of language, NBC Universal can be confident in their ability to meet the audience wherever they are, today, or 10 years from now,” Schuman said.

The streamers, meanwhile – notably Netflix and Amazon – will likely need to get access to an increasing amount of local production and all participants can potentially work with them on this. “With respect to the other emerging global players, they will likely need additional content, above their own supply, and can provide good partners for local broadcasters and other players.”

KEEP ON PLAYING, AND GOOD LUCK!

“All market participants need to encounter one another. Flexibility of model and partnership is the rigour of the day,” Schukman said in conclusion. “Those who can be diverse and flexible, fast and creative, for sale or supply, are those best positioned to succeed. So going back to our Scrabble game, the best strategy is to use your letter S – that’s the most flexible letter in Scrabble. And you’ve got to use it to the best effect possible. Work off what every other player is doing to find the hidden-word values that others don’t see. And of course, keep on playing, and good luck.