The Wit presented the latest in kids TV from around the world as part of MIPTV Online+ last month: here's the selection in full!
By Julian Newby on May 26, 2020 0 Comments

From her kitchen at home, in isolation from Covid-19, The Wit CEO Virginia Mouseler (below) looked ahead to better times. “Right now producers are mostly working on emergency programmes around the coronavirus, including educational and comforting shows around what it is and how to live with it,” she said in her introduction. “But here we have selected shows as if we were in a coronavirus-free world – and we hope this will be the reality within the next three months.” 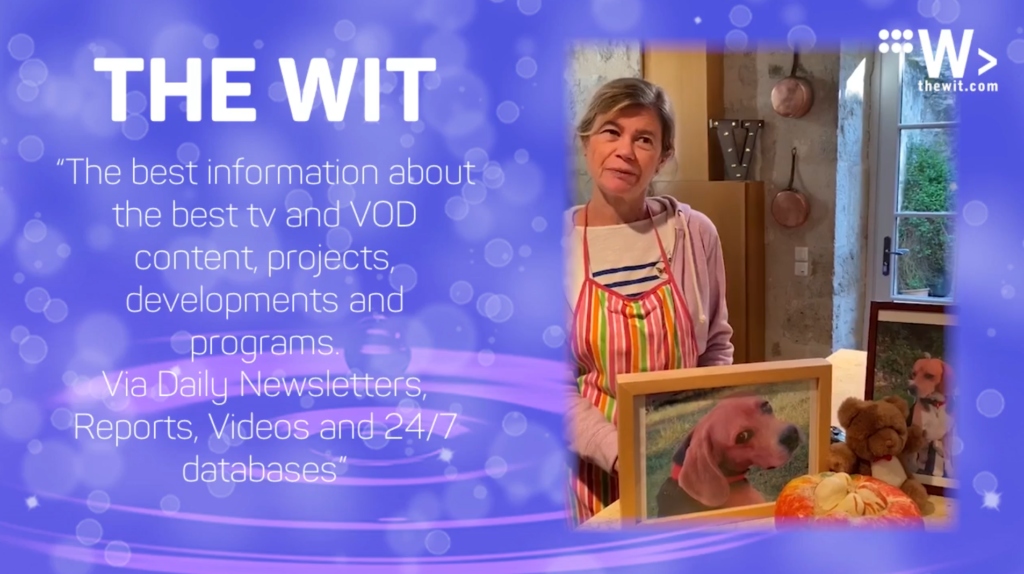 “The streamers have a clear preference for animation — 62% of kids originals is animation for streamers, compared with 36% for linear TV,” Mouseler said. “The main fact this season on the kids front, is that Netflix has become the major provider of kids original programmes, on a par with Nickelodeon. Netflix and Nickelodeon this year are the most important providers of kids’ programmes and this year they joined forces. In February Netflix launched an animation produced by Nickelodeon, keeping the Nickelodeon brand on screen. Glitch Techs takes place in the video-game universe…”

So, without further ado, here is Mouseler’s selection…

“In Glitch Techs (Nickelodeon for Netfllix, also top image), two teams work at a games store as a front for their actual job – hunting video-game monsters who’ve broken out into the real world,” said Mouseler.

Hey You! What if…

“In terms of production volume, CBBC in the UK ranks second for kids originals, with a balanced spread of genres — 42% factual originals and 42% fiction originals, including 8% animation, said Mouseler. “So with very little animation when compared with the streamers.”

“Hey You! What if… is an example of factual production for kids on CBBC. It’s a short, factual comedy science series, broadcast every morning before school with five-minute episodes. The show answers crazy questions, for example: ‘What if… the earth was flat … the moon was made of cheese… you fell into a black hole…?’”

“Commercial channels also offer some factual entertainment for kids, usually with more game or entertainment elements,” said Mouseler. “In February, TV2 Sumo channel in Norway launched BakeBananas, a pastry contest for kids. Two contestants aged 10 to 11 compete in pastry challenges. They are given a new theme in each episode.”

“Amazon has launched its very first live-action series for kids in Germany”, said Mouseler. “Bibi & Tina is a title that is very well known in Germany, a famous franchise since the Eighties – in radio, animation and feature films. Bibi is a teenage witch living crazy adventures with her best friend Tina.”

“In terms of volume of kids original production, ABC Me is Nº3 with 91% fiction produced, including 18% animation,” said Mouseler. “First Day is a high-quality drama series focusing on a 12-year-old transgender girl, Hannah, who has to adapt to real life, navigating the challenges of starting in a new school and finding the courage to live her most authentic self.”

The Complicated Life Of Lea Olivier

“The Encore SVOD platform in Canada streams The Complicated Life Of Lea Olivier, which tells the story of Lea, a pre-teenager who moves from a small town to a big city and has to adapt to a new school, new friends and a new lifestyle,” said Mouseler. “The series is based on the books of the same name by Catherine Girard Audet.”

“Back to our ranking”, said Mouseler. “Disney Channel US is in fourth place for original kids output. And in fifth place we find two European broadcasters: KiKA in Germany and NPO Zapp in The Netherlands. NPO Zapp launched interactive game show Zapp Detective in January, which challenges children to solve a murder case. One of the channel’s TV hosts has been murdered and the children have to find the culprit, using social media.”

“In The Netherlands, local streamer Videoland offers live-action teen series, H3L, which tells the story of the lives of a group of 16-year-olds in high school,” said Mouseler. “H3L is in 11-minute episodes and a second season has already been commissioned.”

“Back to linear TV”, said Mouseler: “in Belgium, public broadcaster Ketnet airs the pre-teen short-form series Hoodie, telling the story of a shy and lonely teenager who reveals himself as a superhero at night – a young parkour fan who secretly hunts down criminals in his neighbourhood of Brussels, with the help of his faithful friends.”

“On Brazil’s Globo, Game Crashers is a live-action series that tells the story of three videogame characters who are tired of fighting villains and saving the universe several times a day”, said Mouseler. “So they decide to escape their screens and enrol at a real high school to become real kids.”

“A production from Brazil on Nat Geo Kids and aimed at five- to 10-year-olds, Pilar’s Diary can make us dream“, said Mouseler. “It’s based on a book by Flavia Lins e Silva, originally published in Brazil but which has since traveled all over the world. Pilar is a young girl aged 10 who wants to discover other cultures and civilisations. Thanks to her magic hammock she is able to travel the world – and travel in time – to fulfill her dreams.”

“So this was this season’s kids world tour,” concluded Mouseler. “I hope you enjoyed the selection and that it distracted you a little bit from this traumatic time we’re living. And hopefully all these shows will stimulate your inspiration and imagination and that within the next three months we’ll be able to forget all our anxieties.”