Netflix, the BBC, Nickelodeon, Disney & more industry heavyweights shaped the future of children's content in Cannes last month. Find out how in this final post-show wrap!
By Julian Newby on November 13, 2017 0 Comments
2
2
Shares

This is the last in a series of posts by the MIPCOM News team, summarising the highlights of an action-packed week in Cannes. Check them all out here!

Kids today really are in a candy store when it comes to entertainment.

As MIPJunior once again demonstrated, a universe of content awaits them, easily accessed on myriad platforms and multiple screens. But for delegates who flocked to Cannes this week, grown-up questions were being addressed about the future direction of childrens’ television.

Among those steering the debate was Andy Yeatman, head of global kids content at arch-disruptor Netflix. Delivering his eagerly awaited Keynote to a full house, he was upbeat about the way ahead for SVOD, and he had the figures to justify his optimism: Netflix’s international kids audience, he said, had surged 61%, so far this year alone. Viewing was up 90%. But it wasn’t just about quantity, it was about quality. Netflix was offering producers a new creative vision, liberating them from standard episodic structures and programme durations. “The platform can conform to that vision, not the other way round,” he said.

Frederator Studios’ Fred Seibert made the case for linear running alongside newer platforms. “No medium dies — except maybe Vaudeville,” he said. “There’s a lot of energy in linear.” But he used his Keynote to make clear that the balance of power had shifted irreversibly. “The TV business is not the most important part of the puzzle any more,” he added. “Digital delivery systems are much more important.”

Nevertheless he was refreshingly frank about the unpredictable nature of the industry. “One of the things that’s both exciting and frightening about what we do is that we have no idea what’s going on,” he said. But for him, in the end, there could be only one focus — the audience. 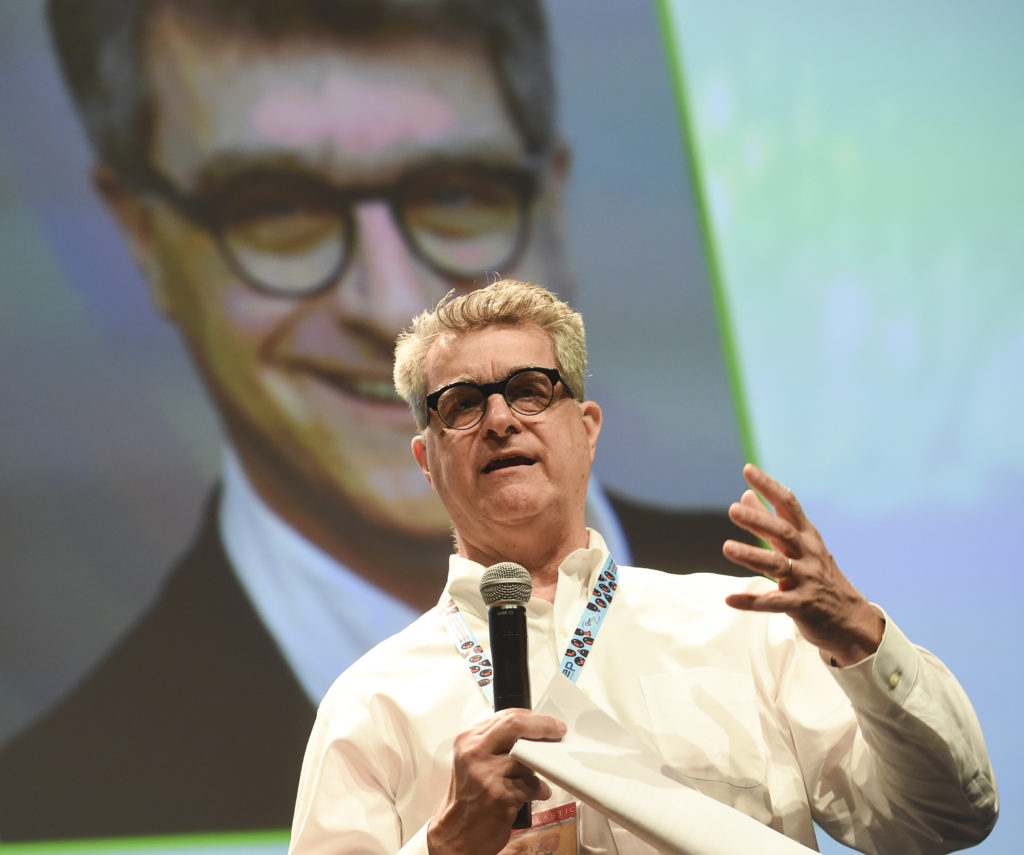 Delegates were making it clear that, while the method of delivery might change, values remained the same. The BBC’s Jackie Edwards used her Fireside Chat session to outline recent moves at the BBC, where the children’s teams have been restructured away from linear TV, to make cross-platform digital creation easier. “Some colleagues will be missed, but the CBeebies flame will still be burning,” she said, adding that the shake-up would mean more opportunities for smaller producers, and the chance of brand expansion for existing producers. Patricia Hidalgo, Turner UK’s chief content and creative officer warned that streaming services would soon find themselves having to do what traditional channels had been doing successfully for years: evolving real relationships with their viewers.

“The time is coming when they will have to do more than just offer shelves and shelves of videos,” she said. For Janine Weigold, head of children’s content at Germany’s Super RTL, the linear route was still crucial, both in itself, and as a springboard to other outlets. “Once our viewers engage with a character, they go looking for it on other platforms,” she added.

As for content, producers were making it local, while all the time thinking global. Michael Carrington, head of children’s and education at ABCTV said domestic content was the key to his channel’s success. “Kids want to see themselves on TV,” he said. And Gloob’s Paula Taborda dos Guaranys said almost half of the channel’s output was locally produced, but that didn’t mean it was un-sellable. “Our aim is to produce content that resonates with kids everywhere.”

Nickelodeon’s Nina Hahn and Layla Lewis explored a similar theme in a MIPJunior session on Saturday, examining how the network develops content in local markets for global audiences. Hahn told producers that Nickelodeon preferred to be involved early in a show’s development — providing the vision chimed with the brand’s values. “Think of us as your partners, not your boss, whatever you bring to the table we have the patches to make the quilt work.” And brand values were key for Karen Miller, vice-president worldwide programming strategy, acquisitions and co-productions at Disney Channels Worldwide when she set out the company’s content strategy. “Our brand pillars are community, storytelling, fun, innovation, optimism, decency and quality,” she said. “That plays out differently around the world, but the pillars themselves are constant.” Further advice for creatives came from Cartoon Network’s Adina Pitt, this time on the funding front. She urged them to become more entrepreneurial in securing finance for production support — perhaps from games or toy companies — to speed the commissioning process up: “Come to us when you‘ve done some of your homework, so that we can activate faster,” she said.

Away from the grand themes, MIPJunior was buzzing with activity, and deals — many of them forging new ties and breaking fresh ground.

Momedia signed deal that will see several of its brands break into new territories, including with MTN Group in Africa, with Babar And The Adventures of Badou.

Jetpack Distribution celebrated a raft of platform deals for three of its top shows: The Sisters, Jamie’s Got Tentacles and Yoko, taking them into new international territories.

Viacom gave details of the launch of a new Nickelodeon linear channel via OTT and mobile platforms in Japan — the first time internationally it will make a Nick-branded subscription TV channel available only via streaming services.

Janson Media scored a first by securing the US digital rights to Korean preschool animation series Little Farmer Rabby. The show, created by PNI System, has been sold across Asia but this is the first deal outside that region, according to general manager Sasha Kim. And Animaccord’s Masha And The Bear was sold around the world from Italy to Indonesia. As well as hectic deal-making, delegates also took time to examine the social impact of the programmes and platforms being offered to young viewers. What steps were being taken to shield them from fake news, fake friends, cyberbullying, identity theft and inappropriate content. In a challenging session entitled Preparing Kids For Social Media Teenhood Carole Bienaime Besse of the French media regulator the Conseil Superieur de l’Audiovisuel discussed the CSA’s call for a total ban on children under the age of three using screens of any kind. She suggested that such a ban could be achieved, given the co-operation of the big media operators and their huge audience data bases. Food for thought, perhaps, for next year’s MIPJunior. Carole Bienaime Besse of the French media regulator the Conseil Superieur de l’Audiovisuel: the CSA is calling for a total ban on children under the age of three using screens of any kind.