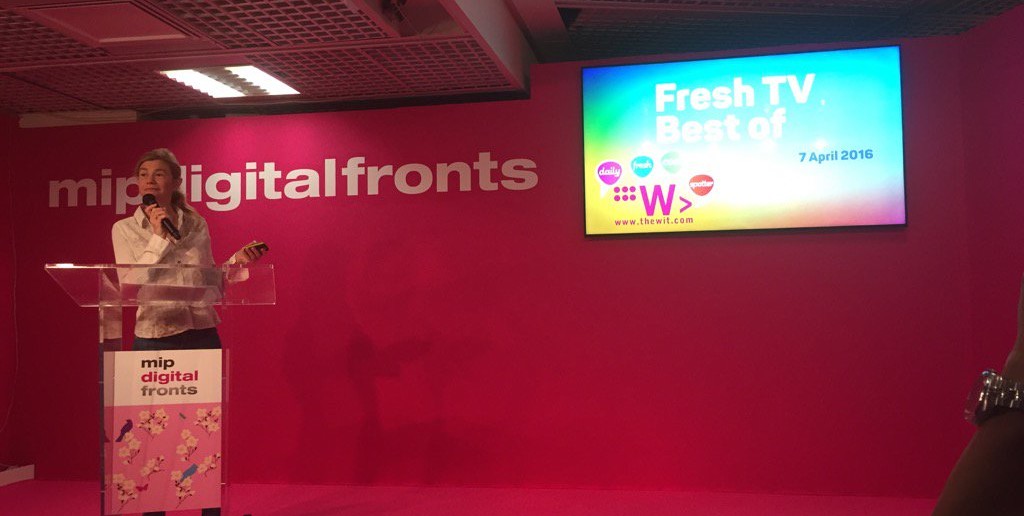 Carpool Karaoke featured as one of the most buzz-worthy shows; comedy carries fiction trends.
By Angela Natividad on April 7, 2016 0 Comments

On this last morning of MIP, Virginia Mouseler, CEO of The WIT rounded up the best of Fresh TV from this week, a great synopsis if you missed any of her sessions here this week. Buckle up! You’ll have to wait another six months for the next session.

Major themes of this morning—and the rest of your year—include the importance of viral, survival, being an animal, fitness, virtual (reality and relationships), immortality, and fan-tastic fiction.

Cursory descriptions appear below, with distributors in brackets following the titles.

Carpool Karaoke
This is “the coolest entertainment format,” says Mouseler. “Even if it’s not sold as a format yet, I want to show it to emphasise that being viral this season is vital.”

The Stream (Nordic World)
Speaking of virality: This is the format where three record labels sign nine artists, who must perform a single on the show. Whoever scores the most Spotify listens will qualify for finals.

Mygrations (Fox Int. Channels)
A herd of humans, 20 men and women—including survivalists, hunters and scientists—undergoes the yearly Wildebeest migration to the Mara River, which takes about six weeks. It’ll broadcast on National Geographic beginning in May, and Mouseler feels it “brings something new to the survival genre.”

Strong (SPTI)
10 elite male trainers are paired with 10 female trainees for a transformative journey to reach their full potential, buttressed by physical challenges.

Dogs Might Fly (Sky Vision)
Are animals as clever as humans? As expected, this show is scoring plenty of buzz this week: In a scientific experiment, 12 rescue dogs are hand-picked and taught empathy, memory, reasoning and problem-solving by a team of experts … to see which of them will succed in learning how to fly a plane. While we’re here, let’s see that emotional finale again:

The Secret Life of the Zoo (Sky Vision)
What happens at the zoo when we aren’t watching? Cameras are hidden in places the public never sees … to answer just that question, proving yet again that privacy is an illusion, even for animals.

The Running Show (Armoza Formats)
A host interviews celebrities while running across a field littered with gameified pit stops. Also, the host sometimes wears odd things, like a horse’s head, adding an extra challenge to both the interview and the run.

Date My Avatar (La Competencia/Televisa)
In this show, a girl dates an avatar of a guy—essentially another guy, who’s standing in—and must decide which to love without ever having engaged with or seen the actual person physically.

60 Days In (A+E Networks)
Seven innocent people are implanted in a correctional institute to learn what really happens behind bars over a course of 60 days, surrounded by 500 prisoners. Nobody, including officers, inmates or staff, knows they’re just doing this for TV. What could go wrong?

The Innocence Project (Talpa Global)
A lawyer takes cases of people who were jailed for murders they didn’t commit. He tries to make things right by looking at new evidence, hearing witnesses and leading forensic investigations. Think of it as the popular podcast Serial … with hope for closure.

Resurrection Makeover (Fujisankei Comm Int’l)
In this slightly more visceral version of the show above, people reunite with dead loved ones … who are essentially just other people who’ve been professionally made up to resemble the deceased.

Descendants of the Sun (KBS Media)
This is the No. 1 trending drama in the world, with 1,5bn VOD views in China. It’s broadcast online as well, which certainly helps spread the love.

K-dramas are invading Chinese and Asian VOD, as well as LatAm. Their scripted formats have also been adapted in Turkey, the Philippines and Russia.

The Night Manager (UK + WW, BBC + AMC)
Trending drama No. 2 is the result of a partnership between the BBC and AMC, and based on John Le Carré’s novel of the same name, with actors Hugh Laurie and Tom Hiddleston and director Susanne Bier. “It remains a British production and a British style, but with the Middle East background, which of course remains really trendy at the moment,” said Mouseler.

American Crime Story: The People v. OJ Simpson (USA, FX)
This third trending drama is based on the true story of the murder of Nicole Brown Simpson. Mouseler noted that it was a drama, but could also be seen as a scripted documentary, given its true-life roots that follow in the (super-trending) footsteps of Making a Murderer and The Jinx.

Mouseler then shared a slide on current scripted trends (please forgive the typo below) around the world:

What’s hot in comedy, then?

The Island (TNT)
Young people. A desert island. You’ve seen this before, right? No … because in a few minutes, supernatural horrors will happen, and these perfectly pretty but inept people are going to have to try to deal. We give you the “reality” show that’s actually a total meta-fictional take on reality shows.

Onto dramas worth watching:

Marcella (Cineflix)
This British noir thriller involves a detective (“and a wife, and a mother”) at the point of crisis: Investigating a serial murder case screening the lives and psychology of potential suspects and victims.

Spring Tide (ESG)
This Swedish noir was a big success in its home country in March. The context: A cold case in which a young pregnant woman was buried in the sand and slowly drowned as the high spring tide came in. 25 years later, a young female cop reopens the case, which her late father worked on.

Dark Angel (ESG)
This UK drama (not to be confused with the American sci-fi series from 2000) recounts the true story of Victorian poisoner Mary Ann Cotton—“the first female serial killer”—who goes ever deeper into a career of casual murder over a mini-series of three episodes.

The Aliens (BBC WW)
Another UK offering, The Aliens sees a group of aliens living in a ghetto of brutal violence—a parable for real-world refugees—and centres on Lewis, a young border guard drawn into the ghetto by a “pretty young alien” and discovers that perhaps he isn’t 100% human himself.

That’s a wrap! We’ll finish, as Mouseler did, with this hilarious viral video of toddlers teaching choreography to the amazing croons of Sia.