This afternoon at MIPFormats delivered three back-to-back keynotes from senior figures in the broadcast industry, discussing how they see the market, and what current trends mean for their production and distribution partners in the industry.

First up was Bibiane Godfroid, CEO in charge of content for French production powerhouse Newen Group, which was recently taken over by broadcaster TF1. She was interviewed by PACT US president David Lyle.

She said that her first priority is to retain Newen’s leadership position, and second to find new talents. “TV is changing so much in terms of how stories are written… so I want to find new talents in all the areas,” she said. “And in all genres of programmes. And also to maintain the development. Development is definitely part of the DNA of the company. Each year we take 5% of the turnover for development. It’s huge… And more than development I want to go further in production.”

Who are Newen’s key buyers? Still the channels, said Godfroid, noting that this is driving the search for new talents. She talked about a new game-show that Newen is touting at this year’s MIPTV called On Fire – where contestants have to try to win as much of a million dollars as possible, with the money they don’t win getting burned in front of them. TF1 has partnered with Newen for the pilot.

Godroid has a long history as a buyer. Will that influence how Newen sells to other buyers? “The most important thing is that you can lose less time. Maybe you don’t really know what channels want, but you definitely know what they don’t want at all!” She is also working hard on co-developments, mainly on entertainment formats.

What does the TF1 acquisition make possible for Newen? International ambitions loom large. “It will be better for the distribution of the creations we made, it will be the possibility to acquire directly new formats or co-develop with external companies,” she said. “All the big companies are doing like that today. International is a need today.”

Godfroid talked about the success of drama Versailles, with its second series now in production after the first series was sold in 135 countries by its distributor Zodiak.

Versailles was a €27m coproduction – a huge budget by French standards, she said. “We want to make more. Not necessarily as huge as Versailles, but drama coproduction is very important, for distribution, for international.” Her team are looking for “good stories” first and foremost. “But also we have first to think locally… A local story is the best way to have the best coproductions.” Godfroid cited Borgen’s international success as an example: it stemmed from a strong, local story.

Documentaries are also high on her agenda. “We have to make as huge a success as Versailles in documentaries,” said Godfroid. Not as huge a budget, though. “Huge in terms of being known everywhere. Being an event. I think documentaries are hot today, and I’m very happy about that. After drama, I think it’s going to be documentaries’ time.”

Lyle asked about new digital opportunities, but Godfroid said that Newen is watching other companies’ strategies before piling in to digital itself. “Nobody finds a way to monetise digital today,” she warned. Newen has experimented with a short digital drama. “For the moment we are more observing than making.” What about young people’s viewing habits – the fabled millennials? “They are not looking at TV as we were, with all the devices and so on,” said Godfroid. “It’s really a world which is changing. Every day there are other surveys saying what will be the new way to look at TV, and the new way to produce on TV. And then the next day it’s something else. It’s very interesting and challenging.” 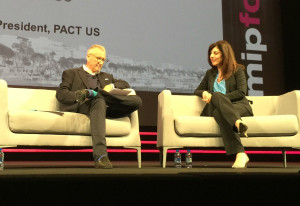 The second keynote featured Maria Kyriacou, president, international at ITV Studios – a newly-created role that sees her leading all her company’s international production firms outside the US, as well as its international scripted strategy and distribution business. Lyle was the interviewer, again.

She talked about the complexity of ITV Studios and her growing role. “We’re working with some really talented people,” she said. “We operate a label structure. It’s a multitude of little companies rather than one big company that swallows everyone. And that allows you to scale up… There’s a lot of autonomy. For the creative directors running those labels, they choose what to produce, and that’s absolutely key.”

At the last count, ITV Studios had 58 different labels. “It was a conscious choice, because we don’t think you can force creativity. You have to let it come out of the people on the ground,” said Kyriacou, who noted that when it comes to distribution, there is more centralisation, as there is with a central formats team who play a supportive role to the labels.

2015 was the first year when ITV Studios made more money from outside the UK than inside it – 53% of its revenues were non-UK. “Our future is in growing international,” said Kyriacou, who said most of this growth will come from the international markets where ITV Studios is already operating. “I wouldn’t say that we’ve written off the opportunity of launching somewhere. But there has to be something that pulls us there. Personally I’m fascinated by China,” she said.

What is new? “We’ve definitely seen a desire for broadcasters to re-try and go back to what for us are the tried and tested formats,” she said. Come Dine With Me and I’m a Celebrity are good examples. “It is important to refresh it, so we do come up with twists and evolutions to all of those shows,” she added.

But does that mean buyers are unadventurous? “You can understand why they like to do it, but there’s no shortage of new shows: we’re bringing 15 to this market alone… It’s not that broadcasters are not commissioning new formats… We are getting a lot of new shows away.” 10 of those shows are non-ITV shows in the UK: for the BBC, Sky and Channel 4 among other channels, added Kyriacou, to show that ITV Studios is not over-reliant on its parent.

Is the definition of a ‘format’ changing in 2016? “What we’ve seen is that it’s not just the gaming elements that people are interested in. They also want to know how you made it,” she said. One example: a show called Keeping The Nation Alive, which started as a health documentary for BBC2, scattering 100 cameras across every aspect of the British health service to film a day’s worth of snapshots. It has since rolled out in eight territories. The NHS is a political hot potato in the UK at the moment, but Kyriacou stepped back from entering that debate. “You shouldn’t look at it as a political piece. It’s more about human emotion: about capturing a moment where it literally is life or death. It’s that drama, it’s raw. I don’t think it’s anything to do with politics at all,” she said.

Kyriacou also talked about digital challenges. “Making [shows]just for digital exploitation doesn’t seem to be delivering value for us at the moment. But it is an essential element of all the formats,” she said, stressing that digital is now part of the process right from the start of a format’s development, rather than an afterthought as it used to be. Would ITV Studios pilot on a digital platform in order to take it to linear TV later? “Why not? We haven’t done it yet, but why not?” she said. 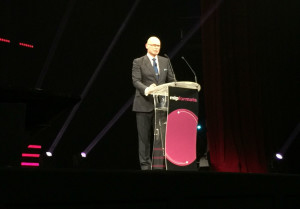 Carter admitted to spending much of the last eight months holding dinner parties, making flower arrangement, reading and thinking – about creativity and about the television industry. “I’ve thought about the relationship between the process, the person, the environment and the product,” he said. “I’ve been thinking about how we make audio-visual content, about audio-visual content itself, and about you.”

Carter also wrote to 50 TV industry creators with a set of questions about creativity, to gauge their views, editing their responses into a “manifesto” called Knitting The World Together. “You view creativity as a shared human drive, which is moderated by access to a domain for which you have a specific ability, which we know as a talent – a talent which is refined by experience,” he said, adding that his respondents also agreed that this creativity is best expressed as part of a team, rather than alone. Carter also said financial motivations do not loom large. “To paraphrase Walt Disney: you don’t make television in order to make money. You make money in order to make television.”

Carter warned that TV companies focusing on sales as their main success metric will lose their focus: indeed, there can be no focus because in those cases, there is no articulated creative vision to work to. Carter then read his manifesto in full – if it is published online, we will link to it rather than extract individual sentences.

One of the most telling sections focused on fear and “the pursuit of stability and predictability”, with Carter’s group of creators railing about managers and other fearful colleagues who throw barriers in the way of their creative ambitions.

At the end of the session, Carter was presented with a Formats Gold Award, presented by C21 Media, EMC and FRAPA in association with MIPFormats. 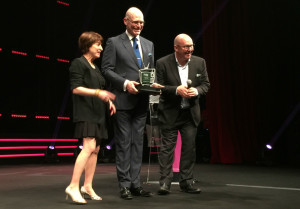