This year’s MIPDoc kicked off with a lively session featuring executives from four prominent broadcasters talking about factual-programming trends, and what kind of documentaries they’re buying for 2016 and beyond.

The panel included (l-r): Dr. Kristina Hollstein, director of acquisitions and coproductions documentaries for ZDF at ZDF Enterprises in Germany; David Royle, executive vice president of programming and production at Smithsonian Networks in the US; Corentin Glutron, head of acquisitions at RMC Découverte in France; and Nesta Owens, director of programmes at Discovery in the UK. The moderator was World Screen’s group editorial director Anna Carugati.

The panel talked about some of their recent success stories: First Flight: Conquest of the Skies and some documentaries about the British royal family for ZDF; a series called Mayday or Air Disasters for Smithsonian Networks; the French version of Top Gear for RMC Découverte, as well as treasure-hunting and building shows; and Diamond River Hunters for Discovery – a show bought with Africa in mind that turned out to be a hit elsewhere in the world.

“One of the things I love about MIPDoc is searching through the tapes here and coming across something unusual,” said Royle, looking ahead to the rest of the weekend.

The broadcasters talked coproductions, with Royle saying it’s important to realise that audiences never know the difference between commissioned series, co-productions and buy-ins.

“I don’t think there’s any difference: the audience doesn’t care how they’re put together,” he said, before talking about some of the positive aspects of successful coproductions. “You have more people bringing a perspective to a programme. When that collaborative process works well, you have more input and more insights.”

Glutron disagreed that audiences aren’t aware, in his home market at least. “As a French TV channel, it’s really different: the audience is used to always seeing American shows. When people talk in French in the show, it’s totally different for the audience! That’s the biggest difference for us: to have a French channel specialising in factual… The French version of Top Gear doubled the ratings of the UK version.”

Hollstein agreed with Royle that the audience shouldn’t be aware whether a show is an original production, a coproduction or bought from a library, but stressed that shows she airs must “feel like a ZDF programme… not like a German programme, but it feels like a response to the needs of our brand”.

“Where it’s possible I would try to avoid a coproduction. It’s extremely complicated, a long and unforeseeable process,” she continued. “We can only come into an international coproduction if we know the financing is completed. That means sometimes we have to wait a long time… And also contracts-wise, if we invest in a coproduction, we need completion bonds, we need guarantees… so I would rather recommend a producer to come to us as a pre-sale partner: it’s easier and you can keep your energy for what’s really important: the product.”

What about the changing form and tone of those programmes? Owens talked about binge-viewing, and the hope that if people are watching shows in batches of three, four or more episodes at a time, that may reduce some of the tropes of factual programmes striving to constantly hold an audience’s attention.

“I hope all the binge-viewing that’s going on with some nonlinear platforms might mean people are able to watch more of our content and make our content a bit more sophisticated… The shows we get from the States, there’s a recap every five minutes! For my viewers, that’s one of the things they complain about the most: it’s slightly childish and unsophisticated,” she said. As binge-viewing grows, perhaps this will be less necessary.

The panel were relatively unfussed about 4K as a technological innovation – Glutron pointed out that mere HD is still a relatively-recent introduction in France – while Hollstein said that while a lot of big projects are being shot in 4K, they’re not always being post-produced for that resolution.

Royle talked about a micro-trend within all this. “People’s tolerance of black and white has gone down, and colourisation has become much more important,” he said. “And really, the pioneers of that are in France, and Apocalypse [the World War II documentary]– which has been a worldwide success – has been a fantastic show for us. And that has really spoiled audiences… Younger audiences today, especially in the United States, find black-and-white distancing, and they want the colour put back in.”

What about the balance between one-off special events and traditional factual series? Most of the panel agreed that the latter remain the core of their schedules, even if the former are also important. Hollstein gave another perspective, noting that ZDF’s approach varies between its main channel and its digital channels.

Carugati asked about how else the broadcasters offer their programming beyond linear channels. Smithsonian streams shows through its website and mobile apps. RMC Découverte has catch-up TV, but a year ago it bought an SVOD service and is starting to push programming into that, but Glutron said it’s still early days. Owens said Discovery’s markets are still emerging – how it distributes beyond TV will depend on its affiliate partners. And ZDF is catch-up only for now when it comes to going beyond linear.

“This catch-up service will be relaunched in the second half of this year,” said Hollstein. ZDF viewers can catch up with programmes for up to a year after their transmission: longer than for many other broadcasters around the world. “It’s important for us when we buy or coproduce programming that we have the same range of rights and possibilities for presenting it in this service as we do for our productions,” she said.

The panel gave their key tips for producers hoping to sell to them. “Please just watch the channel so you can propose us something relevant for us!” said Glutron. “Once you propose five times something totally not right for us, we don’t even look at the sixth one.” Royle agreed: “The number of times that people pitching programmes that are not relevant to what you’re trying to do is numerous. If that happens, after the third pitch you start to turn off.”

What are these buyers looking for, though? “I would use the word relevancy. Something that always punches through for us is when a producer comes through with an idea that keys in with something they perceive is going to happen in the future, or which is going to capture the public imagination,” he said. One example: as Downton Abbey took off, a producer came to Smithsonian with an idea about Americans who came to Europe and married in to ‘old-money’ families like a key character in the show – the result was Million Dollar American Princesses.

“We are looking for historical series, we are looking for space series… and of course, one has the impression that everything has been done in a way, and the technologies we know them… So in fact what I’m personally looking for is something that surprises me,” said Hollstein. She praised the inclusion of an ‘Early Stages’ category in this year’s MIPDoc catalogue as a way to spot new ideas that are bubbling up.

The panel were asked about the resurgence in true crime, spearheaded with Netflix’s Making of a Murderer. “Everybody talks about Netflix and we are all very attentive to see how Netflix may change part of the market,” said Hollstein. “We cooperate with them, as pay-TV channels they have a need of local programming in the German market… On the other hand we have to see where we have to start to protect our rights and to protect the programmes that we have on our channel. I think that for factual at the moment Netflix is not a big competition because they are more concentrating on series and fiction, but of course that will change… We have to see what does it mean for us in terms of holdbacks, and especially for our catch-up service and for the productions we get involved in.”

“I really welcome Netflix moving into non-fiction because it says there’s an audience out there,” said Royle. “Yes it is more competition, but it’s more money going into the genre we love.” Owens and Glutron both agreed with that point. “Hopefully it raises the bar for everybody and the content we get will be better overall,” said Owens.

The session finished with the panel being presented with World Screen Factual Trendsetter awards, to recognise their contribution to the factual industry. They were presented by Carugati and MIPDoc director Lucy Smith. 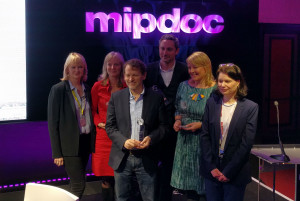