TV Trends Web Review: Too much TV? There’s no such thing!

In the midst of dramatic changes for the entire TV industry, here's why the overabundance of content is a sign of our times
By James Martin on August 27, 2015 0 Comments

When does too much become too much? This summer’s buzzword in the TV industry – Peak TV – reflects the current shape of the medium, and it’s quite a worrying one: when FX CEO John Landgraf came to the TCA press tour early August (watch video below), he mentioned the fact that the considerable amount of good scripted shows produced nowadays “often get in the way of the audience finding the great ones.”

Now that the number of original US shows made per year has doubled since 2009, have we really reached “peak TV”? Should we expect a bubble burst in upcoming years, if not months – in other words, when TV investors realise that audiences just can’t keep up?

Peak TV may be an alarm signal for some analysts, but it’s a bliss for most TV viewers. In a must-read blogpost, HitFix TV critic Alan Sepinwall points out that “peak TV in America has led to not only an incredible amount of quality, but a diversity in both the kinds of quality shows and the kinds of people whose stories are being told,” alluding to the current golden age of television, spurred by shows like HBO’s The Sopranos 15 years ago. Is ratings fragmentation the real threat in that case? In fact, what’s bad news for advertisers is good news for creativity. As Sepinwall notes, “the very fragmentation of the audience that inspired this particular gold rush has also earned renewals for shows like The Americans, Rectify, and UnREAL that would surely have been much shorter-lived under TV’s old math.”

Are we bound to see ratings decline? Not so fast, according to 23 top TV executives quizzed by The Hollywood Reporter. A majority of whom wishes the whole TV system could change: USA Network’s Chris McCumber would love to “change the way the industry measures the success” of its programming; TV Land’s Keith Cox wants to “disregard next-day ratings”; and, last but not least, Fox’s Dana Walden – one of MIPCOM’s Personalities of the Year – sees a future where they could “move away from the pilot calendar.” Ultimately, it’s the very foundations of TV’s current business model and ratings measurement that could well evolve.

Will that be enough to adapt to the new era? The way the audience consumes content is shifting too, which makes Peak TV an even more challenging time for professionals: on-demand consumption is slowly imposing itself as the new norm. This has become particularly clear in the battle opposing HBO to Netflix. With HBO launching its own OTT service HBO Now, the traditional broadcast model and the SVOD one are on the verge of convergence, echoing the tremendous changes in the way the public watches TV, REDEF writes in its in-depth analysis of the two business models (see chart below). Both companies now try to enlarge their respective audiences: HBO’s recent partnership with Sesame Street “offers new opportunities to create cordoned-off areas for children to safely consume content,” The Harvard Business Review writes; and Netflix is adding a number of exclusive films and television series focused on teenagers “to position itself as a digital entertainment hub for the postmillennial generation,” according to The New York Times. 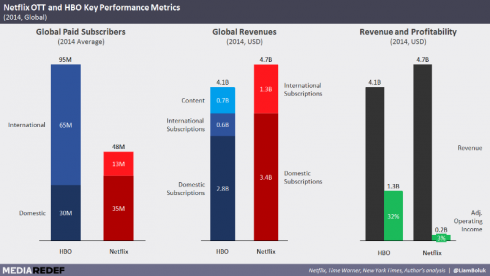 The digital shift is global and goes far beyond the traditional frontiers of the TV realm: this wouldn’t be “Peak TV” without all the new players that have emerged these past few years, just as interested in fresh content as the incumbent ones. BuzzFeed? NBCUniversal just announced a $200 million equity investment in the technology-driven media company, which “represents big media’s increasing interest in using of clickable, social-media friendly content to drive audience to its linear TV telecasts,” according to VideoInk. Digital revenues? In an industry where ads are key, it’s worth noting that digital media spending took $1 billion away from TV since 2014, a Standard Media Index study published on TubeFilter reveals. Facebook? The social network stopped pretending it wasn’t interested in video content, and is now directly competing with YouTube. Controversy around the issue of “freebooting” is growing though: The Guardian reports that video creator Hank Green “is unhappy about the fact that videos uploaded natively to Facebook – which the social network says are being watched more than 4bn times a day – appear to be prioritised over embedded YouTube videos in its news feed algorithm.”

In the end, the main problem faced by media players – provided that it’s a real problem and not just a trend – isn’t the overabundance of TV, but the dramatic rise of content in all kinds of shapes and on all kinds of platforms. It’s worth noting, though, that the terms “Peak TV” and “golden age of television” lose some of their relevance when it comes to non-scripted content and some non-US countries. In a guest column in The Hollywood Reporter, WE tv President Marc Juris writes that “television’s new golden age shouldn’t leave out reality TV,” pointing out that “the term “reality” is often misused as a “one-size-fits-all” label that fails to adequately characterize the wide range of different and distinctive shows identified with the genre.” And if you think Netflix embodies the digital, non-linear shift of the Peak TV era, take a look at France, where “consumers prefer to stick to good, old-fashioned live telly rather than those new-fangled digital services such as Netflix,” as reported by The Register…

Last but not least, “Peak TV” may not last for long if this summer’s stock trends continue to impact media companies. Netflix, Apple, Disney, CBS Corp., Viacom, Time Warner and 21st Century Fox are all in the middle of a financial turmoil, Variety writes, and Alan Sepinwall’s predictions may become true sooner than we think, leaving us mourning the current golden age of television:

I can envision a future where the economics have flipped again, many of these players have gotten out of the game, and suddenly I’m sitting around a table at press tour with a bunch of critics sadly lamenting how good we had it back when it was Peak TV in America.

Too much TV? There’s can’t be such thing, for television – and its creativity – is, and has always been, the necessary reflection of our times. Right now, it’s all about making the greatest possible content, no matter its shape or size: “Peak TV” shouldn’t be feared; it should be celebrated!

Don’t miss MIPCOM (5-8 October): get a chance to live the latest evolutions of the TV industry from the inside! And be sure to check out our industry news page, curated year-round by the MIP Markets team.