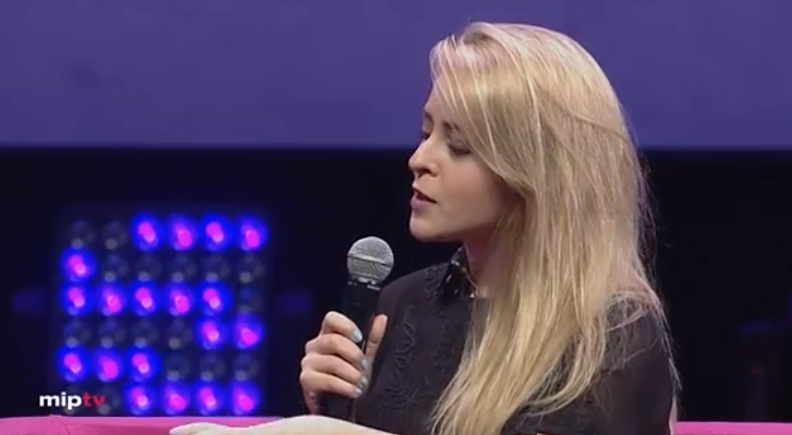 It has more than 1 billion monthly viewers, but what would the world's largest video service say at MIPTV?
By Stuart Dredge on April 15, 2015 0 Comments
1
1
Share

The stats around YouTube may be familiar, but they still have the power to startle. More than one billion viewers. 300 hours of video uploaded every minute. Half the views coming from mobile devices. And “thousands” of channels making six-figure revenues per year – even if there’s still a lively debate about whether those revenues shouldn’t be higher, given their huge audiences.

Today, host Michael Stevens of Vsauce introduced a selection of YouTubers and partners to talk about their strategies on the service.

“Every group of creators we bring here each year ends up in the next year just killing it,” he said. by way of introduction, adding that his own science channel Vsauce has become a network of four channels with more than 10m total subscribers and more than 1bn lifetime views.

He talked about YouTube’s scale: “Every single minute, there are 10 more days to watch. You couldn’t watch all of it in a lifetime… but it also is a challenge: how you get discovered in that giant mess of recorded image,” he said.

Stevens sees community as the key. “What community to me means is you’re not just getting people to watch what you make passively, you’re actually inviting them in. ‘Hey you guys, you’re gonna become fans because I’m going to give you a role, I’m going to make you a part of my show’. But that can mean many different things.”

First up was Luzu, producer of LuzuVlogs in Spain, who has a global audience. “I started with my audience in Spain, and then it spread,” he said. Luzu now lives in Los Angeles, with Spain, Mexico and Argentina the countries with most fans for him. “When I do content I don’t think of a certain country, when I do it I think different people from different countries and cultures need to feel represented by what I do. So I try to do things thinking globally already.”

Luzu’s vlogs are in Spanish, and he said that he works 14 hours a day on his content, so doesn’t see  any more time to launch an English-language channel. “I think I’m funnier in Spanish than in English!” he said. His channels include vlogging, gaming and answering questions from teenagers. “Imagine that what I do is Central Station, say, that’s my headquarters, then I wanna get to one of these islands where I have 15 year-olds who like certain things, and on another I have 20 year-olds who like something different,” he said. “It’s just different packages.”

Having an audience for his vlogging channel helped him launch those extra channels. His business consists solely of him and his girlfriend. “We get to wear all these hats that in a production company different people on the team would wear,” he said. He hosts, writes, but he’s also the marketing department and accounts. “I feel like I own everything, but yes it’s a lot of work… we don’t need any help for now,” he said. “It’s a lot of computers at home, a lot of lights – it’s a set – and a lot of equipment that a production company would have before.”

Luzu talked about community building. “It’s something that comes with YouTube: people feel extremely connected with content creators. Creators are connected with people who watch their videos, and you want them to feel like that. It’s very different to traditional media, where you keep a constant conversation,” he said. “Social media is a great way to engage with the audiences when you’re not uploading videos, to help them feel part of what you’re doing.”

Next to speak was another YouTuber, Fleur De Force from the UK, who started with a beauty/fashion channel, then launched a second that’s more about vlogging, with lower production values. She started in 2009. “I started because I was bored. I was at university… and I felt somewhat creatively stifled, and discovered this community online and wanted to be part of it,” she said. “I’ve grown and changed and adapted with my audience. I’m an old granny of YouTube! I feel like the old one.”

She said it’s been a natural progression, while showing a bit more of her personal life in her vlogs. “I feel like the more personal element of it has changed more than the actual beauty and fashion content. I’m still talking about make-up products: it’s not going to change too much!” She has worked with brands including Sainsbury’s and Coca-Cola. In the former case, she made a year-long collaboration to cook a weekly recipe on the supermarket chain’s channel.

“With brand work it’s a fine balance. I obviously talk about brands all the time in my videos, so it makes it very easy for me to decide who I want to work with and who I don’t want to work with. But the best brand collaborations for me are when I get to work on something outside my normal content… I feel like that for me now is one of my favourite things to do.”

Her team is “pretty much me: I have management who help with serious stuff,” she said, but the videos are all her work: two videos a week on her main channel, then she vlogs every day every other month on the other channel. “I feel like you get a mini-series, do you know what I mean?” Fleur is self-taught on all the technical elements of producing shows and managing her channel.

She also talked about community values on YouTube: “Get involved with them: and never see yourself as above and separated from them. Remain a fan yourself,” she said. “And make sure you are consistent, and they know when to expect content, so they know when to come back.”

Next to speak was Jemma Wilson, director of Crumbs & Doilies in the UK. It was a cupcake company in 2006, which later evolved into a YouTube channel. Two years ago, in fact, as part of chef Jamie Oliver’s fledgling food network on the service.

“Initially because Jamie has his own production company… and because I had no experience of anything like production, they took control of everything in terms of production: they filmed, they edited and they uploaded for me. Which was great for me, because I was running a business,” she said. But now her business partner films and edits everything, which helps them turn videos round much more quickly and affordably.

She’s hoping to pass half a million subscribers by the end of the year. In December, she opened a store in London. “It was inevitable for our business: nine years in the making, it’s about time we had a shop! But the impact that my channel has had on the custom has been incredible,” she said. “When we opened in December, that was during holiday time, so a lot of people come to London from overseas, and 50% at least of the customers coming in were Cupcake Jemma fans from around the world. And today 40% of the customers are coming in to meet me… I wasn’t expecting the volume of customers being Cupcake Jemma fans, to be honest.”

Some fans come into the shop looking for the cake she made in a recent YouTube video, although only the ones she’s allowed to sell – for example, not a Minion cake. “The fans that come in are clearly really excited about my channel, but funnily enough a lot of people come in saying they don’t make anything, which is bizarre to me!” she said. “It’s magic, baking.” “It’s not magic, it’s science!” shot back Stevens.

Could she have done this without Jamie Oliver and his production company? “Technically I would not have known where to start. Absolutely not!” she said. “They’ve really mentored me actually, and it’s a great alliance because Jamie has such a massive following: he’s got a huge fanbase… so any time he mentions my channel or my company on his  personal feeds or Jamie’s FoodTube feeds, I really see a spike.”

The next speaker was Joe Harland, head of visual radio at British broadcaster the BBC. He admitted he has an “inherently ludicrous and daft job title”, but said the role is important. “We had to look at what the audience were doing: which bits of our content were they most talking about and responding to? Well that’s what we should be doing more of,” he said.

Radio 1 has some fans who don’t even own radios now. “We have DJs that don’t even own radios, which is extraordinary but to be expected. If you are finding 20-25 year olds they are unlikely to have bought a radio, from owning apps and so on,” he continued. “The idea of going to someone and saying ‘Did you like that video? Buy a radio’… it’s just too much of a leap.”

Harland talked about Radio 1’s Internet Takeover show, which invited in vloggers with less than 1m subscribers to host and chat. “It brings an audience to the radio station that we want,” he said. But he also warned that “you will struggle terribly to have success on YouTube if you say ‘we found this funny clip on this funny TV show that we made’ and just put it up there… the audience aren’t going to respond to that. They don’t want to share around or watch an afterthought. They want something that was deliberately made for them.”

“I expect all of my radio producers to be aware of what will and won’t work in video,” he continued. And if something doesn’t work “I expect them to keep on trying until they’ve had a good idea”. He also said Radio 1 doesn’t believe it’s right to ask YouTubers to simply make one of their videos for its channel for free. “It has to be a collaboration,” he said. “Radio and the BBC still has a gravitas and a global presence that is still valued.”

Final tips? “The opportunities for YouTube helping business and helping programming is enormous. Radio 1, if we have an Ed Sheeran video that gets 4m views, just by clickthroughs we can get them to the full programe, to a half-hour Ed Sheeran programme on the BBC. You have to fish where the fish are and then lure them into your net. But you can’t have success internationally if you don’t fish where the fish are.”

Stevens wrapped up: “YouTube is a social experience. Building communities and being unafraid of taking risks and experimenting and seeing how people react, and learning from that and changing mid-stream what you’re doing is a common theme,” he said.

And his top tip? “If you met two people a day every day of your life from when you came out of your mother to when you were buried in the ground… you would still only ever meet 60,000 people. It’s not even close to a tenth of a million. So communities now on Youube, n a global platform, are mind-blowing,” said Stevens.

“My tip: think of yourself as your audience. When you make something, don’t think of it ‘does this make me look good as the creator?’… Instead, ask yourself ‘would I share this on Facebook or would I tweet this YouTube link or would I comment on this if I wasn’t involved in it? Would I want to be a part of it? That’s when you know you’ve made something that makes people want to join in and be a part of your community.”