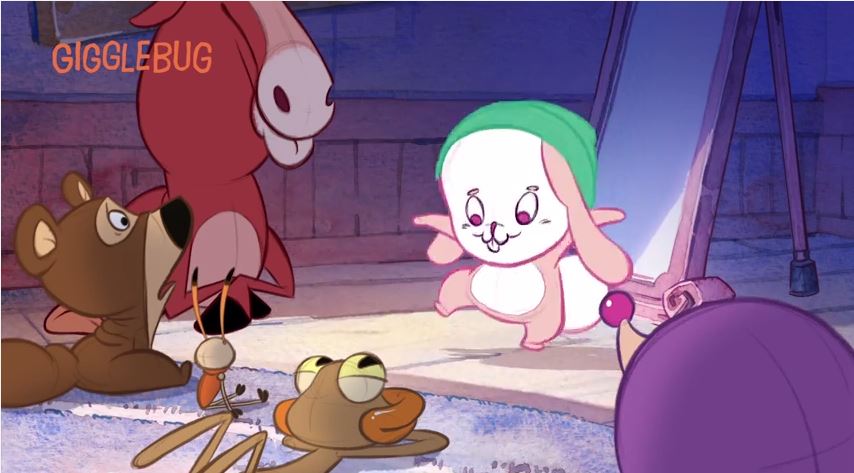 Simon Staffans: The Nordic kids are alright – and they’re being served great content

Why is the content market for kids in the Nordics so unique? These local execs give us some insight.
By Simon Staffans on April 9, 2015 0 Comments

The content market for kids in the Nordics is a fairly unique one. There is, of course, the constant influx of series and animated series from other territories, but the content development and production market in the Nordics is a vibrant one. It’s filled with the unique traits that make Nordic kids’ content stand out and win prizes all over the world. For this fifth and final article in the Focus on the Nordics series, we talked to some of the groundbreakers in the community.

“The Gigglebug franchise started out as an idea for an iPad game, based on tickling and laughter. Laughter is contagious and we were looking at creating something that had a universally positive tone. Laughing together is simple yet magically profound. As a parent, one thinks about what kind of upbringing you want your kids to have, and this is one of those things I really stand by. When you are smiling you can approach any challenge better. Now, we’re mostly animators and graphic artists, so we immediately started out creating the character – that of the Gigglebug, a tiny forest-dwelling thing with a big gift, that of an irresistible, infectious laughter that spreads to his friends (watch the preview below).

The reception has been great. We’ve accumulated 750,000 downloads of the app to date. From the very beginning, we also started working on scripts for a TV show. At the moment, we are looking at a series of 26 episodes about Gigglebug and his – at times – grumpy friends in the forest. The episodes will be finished in April 2016, but we’ve already sold the series to 11 territories. It’s been interesting coming from a fairly unexplored area – pairing a consistent story universe between an app and TV show.

That’s one of the best things with online – it’s easier and cheaper to try out concepts and narratives. It’s no walk in the park though, as the competition for discovery is fierce; just finding and reaching your target audience demands a considerable effort. I’d say the best thing to do is try to get the best from both worlds; allow the expertise from TV buyers – who know their audiences intimately – to inform your creative process. Perhaps there are things lacking in your concept, and it really doesn’t have the potential to be as big as you’ve envisioned? At the same time – trying things out online will give yourself more knowledge about your concept. Looking at Gigglebug though, I’m convinced that despite the impressive number of app downloads we need the TV series and the extended narratives to be truly loved by kids and families in the long run.

I think we creatives operating with children’s content in the Nordic countries are influenced greatly by the public service broadcasters and by the educational system. I find that we, to a larger degree than perhaps other territories, highlight a deeper meaning with our creations. Perhaps it’s a kind of a philosophy – as with Gigglebug, we wanted it to be entertaining and silly, but we had something more behind the surface as well. We wanted to make the world a better place, through smiles.

And there’s a lot of other innovative things coming out of the Nordics as well. If I’d have to one project for people to take a look at, it’d probably be the crowd funded campaign from Linda Liukas – Hello Ruby. It’s simply great.”

“Children’s media has long-standing traditions in the Nordics, ranging from H.C.Andersen and Elsa Beskow to Astrid Lindgren and Tove Jansson’s Mumin Trolls. It’s been a successful field, effortlessly moving to television and film as well. I believe it’s that tradition that still has an influence of children’s media of today.

There’s also a discernible courage among creators when it comes to challenging preconceived notions about which topics are or are not suitable for children. We’re quite good at dealing with tougher topics – divorces, death and so on – in ways that feel relevant for the children and in ways that do not run the risk of damaging the children in any way. Our content needs to be entertaining on one hand, but also help the kids to evolve in different ways.

We’ve seen a noticeable shift during the past three years. Kids are moving increasingly towards online media, and especially tablets. Our strategy is to offer content on the platforms the children use, and aim at offering easy-to-use entry points into our content. One big question – which I guess is the same for everyone – is how this will affect the content itself in the long run? Will it mostly be about re-appropriating content for new platforms, or will we increasingly be looking at tailor-made content for all platforms?

If someone wants to take a look at something impressive in children’s media from the Nordics, I’d suggest a study of NRK Super’s BlimE. It’s an impressive showcase of how to do TV differently, and it’s a testimony to NRK’s courage to stand by a project over a long period of time – leading to them now reaping the benefits.”

“The format market for kids TV is a fairly small market. Some years ago I was convinced this was a coming market, but compared to the format market for adults, it’s been slower in emerging, especially looking at live-action programming from other territories than the English-speaking ones. I still believe, however, that the market will grow in the wake of increasing globalisation. There will be more co-productions, more format sales and more adaptations of, for instance, live action drama. When we succeeded with Energy Survival, it was mainly due to the success in the Nordic countries, but the drama serie we’re involved with now – “TRIO” – is doing splendidly in Germany as well, so…

Nordic content for children is perhaps “closer” to the kids themselves. They are given more space and increased possibility to set the premise for the content. A lot of Nordic content is based on value rather than entertainment. And we tend to focus also on authentic, believable adult characters in the narratives, giving them important roles as well.

There’s no lack of talent or ideas, and perhaps most encouraging right now is a strong feeling that there is a growing sense of pride in working with media content for kids and young people. I also feel we need to be increasingly thinking international from day one of the development phase – without losing track of our own audience. But every project that stands a chance of traveling needs to be developed with bigger markets in mind.

I think it’s impressive to see how territories with smaller resources still manage to create fantastic productions. I saw an episode of the Emmy-winning documentary What’s Your Dream? from Chile, and it’s a prime example of how important it is to create great content for children. It allows the kids to see another place, another way of life; at the same time making the world smaller – and bigger. That’s TV at its most beautiful!”