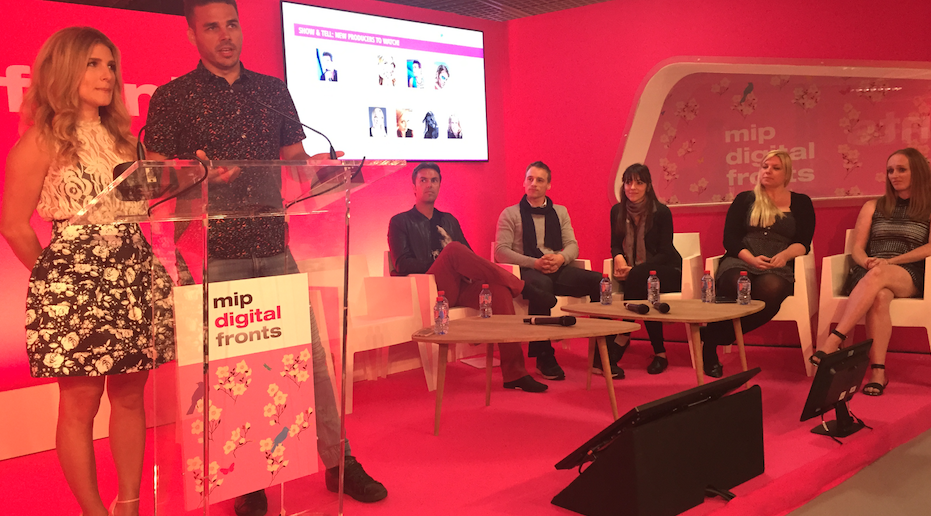 New producers include Mr Kate, a genie who travels the world granting wishes, and more.
By Angela Natividad on April 14, 2015 0 Comments

This exciting session of New Producers to Watch, moderated by James Martin of Reed MIDEM, allotted a few minutes to each young, fresh and brand-spankin’-new producer to present their project to a riveted audience. As Martin explained, for the first time this year, MIPTV’s pick of new producers had been made by the MIP community, via Facebook and Instagram, in the run-up to the event.

First up were Mr. Kate, composed of Kate Albrecht Joey Zehr. Both hail from traditional media — Albrecht was an actress, Zehr a musician — and will take part in Maker Studios‘ MIP Digital Fronts session this afternoon.

“We wanted to get out of the traditional machine and start our own thing that we could be in charge of from conception to distribution,” said Zehr. “I think that’s the future, especially in L.A. Everyone’s creating their own brands, and it’s an interesting time because you can do that.”

“We have a direct communication with our audiences, so we really understand our consumer and audience,” said Albrecht. “We put up videos weekly and blog posts daily, and social media multiple times a day, so we’re in a constant communication with them, knowing what they want. Then working with brands is awesome because we know exactly how to integrate them.”

Today Mr. Kate ships to 150 countries and enjoys a global audience of millions of Millennials. Albrecht calls their world “fun, aesthetic and bubbly”, and they have licensing, book, TV, brand and syndication deals.

“Our slogan is ‘Why not,’ so you should work with us because, why not, right?” Zehr said.

Next up was Joshua Dawson of Genius Productions. He works with his wife Ingrid Thornhill, dubbed “director of dreams”, on The Experience Genie—a project in which they travel the world granting wishes to people who’ve drawn the shorter end of life’s stick.

“My mission is to prove what can be accomplished with the power of love,” said Dawson. “We’ve granted hundreds of wishes in 100-plus different cities and inspired millions. But we’re just getting started.”

Their latest content concept is to film themselves traveling the world, spending three days in each city and granting wishes while there. In a pilot they screened for us, they granted 30 wishes in three days for a family facing terminal cancer.

Following the genies were David Delayat and Amandine Cugurra of No Mad’s Land.

Delayat is a computer-science student, and Amandine is in business school. The cameraman, who wasn’t present, is in law school.

No Man’s Lands uses video to create artistic content. “We started with clips to mix art together” said Delayat. Today they try to realise longer-form concepts, using innovative production practices that they learnt themselves.

“Our strength is we’re all self-educated in cinema and video branding. We do this because it’s our passion,” said Delayat. “We try to help people believe in their dreams and in what we want to do.”

Their latest project, Birth of a Hero, builds on the foundations of a “huge story”, said Delayat. The movie will be 30 minutes long and marks their first foray into longer-form content. Its trailer features lush live-action-fantasy-style cinematography and may appeal to gamers, as it includes a few Zelda references, moderator Martin noted.

Next up was Jennifer Geraghty, who’s developed an original series called L’Amour (or less)…

Geraghty is American. She moved to Paris four and a half years ago, and, as people do, started dating. “It wasn’t until I started dating someone from a different culture that I realised how deeply ingrained my culture is in me,” she said.

Geraghty started talking to expat and French friends about their experiences in mixed-culture coupling, and started writing those stories down. These became the basis of her show. “Some are over-the-top ridiculous and funny, some are surprisingly tragic, and some are touchingly romantic,” she said.

The pilot episode was Kickstartered and featured an international cast and crew. The promo appears below.

Last but not least came Kristy Fuller of 1440 Productions. Fuller, an Australian, stumbled upon an American soul group called The Sweethearts, which consists of 30 young girls who perform soul music together. She became fascinated by their group and life of touring.

“Australia is a small market and we were fortunate to get ABC to air our first season,” said fuller. The first season covers The Sweethearts’ European tour; in a second season, they do a major show in the United States. It was nominated Best Kids Factual and a potential third season is in line. Check out the trailer below.

Be sure to check out these new producers and get in contact—before they blow up!