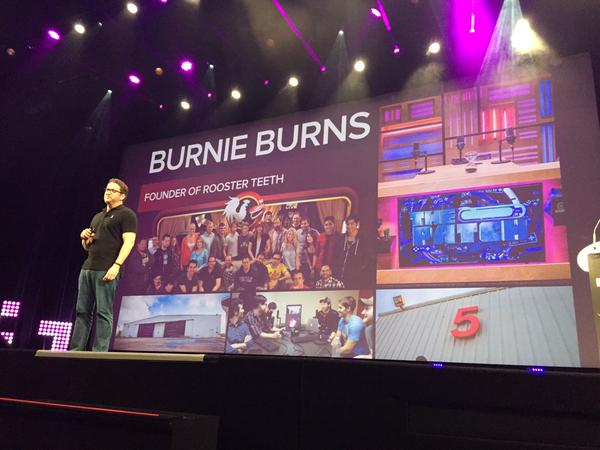 12 years after the first "Red vs Blue", what makes its creators special is longevity, says CEO.
By Angela Natividad on April 15, 2015 0 Comments

This series of MIP Digital Fronts are hosted by co-founder Shira Lazar of What’s Trending.

Founded by Matt Hullum and Burnie Burns in 2003, Rooster Teeth is a creative production studio responsible for the award-winning Halo-based online series Red vs. Blue (now on Netflix). It also created animated series RWBY, comedy gamer series The Gauntlet, and Immersion, a reality show that brings video game theories to the real world.

Its subscription platform totals 1,8 million community members and it is counted among YouTube’s most popular networks, with over 15 million global subscribers. It also hosts podcasts and events like the Rooster Teeth Expo (RTX). It is now a subsidiary of Fullscreen, Inc.

“What separates this content from a lot of the other great content at the conference is the fan base. In all the years I’ve worked in media, I’ve never seen a more passionate fan base,” said Damien Berger of Fullscreen, who introduced creative director Burnie Burns. “They fundamentally changed the relationship between content creators and fans.”

Red vs Blue exploded before YouTube even existed. “Everything that we had to do to service this audience, we were blazing all of these trails on our own. The story of Rooster Teeth, what makes us special, is longevity.”

Last year Rooster Teeth ran a crowd campaign for its first-ever feature film, Lazer Team (shown below). “We met our goal for the movie, funded it in 24 hours, raised a million dollars in 48 hours… we broke the record for the most amount of money raised on IndieGogo,” said Burns. The final total raised was $2,48M, and they are currently seeking distribution partners.

“The productions we’re making in the next few years will look a lot like Lazer Team, so we’re definitely looking for a long-term strategy with a long-term partner,” said Burns.

Below is the trailer for season 13 of Red Vs Blue, “the show that started it all for us,” Burns said. Based on the enormously popular xbox game Halo, it is the second longest-running sci-fi series ever, behind Dr. Who, and the longest-running web series in the history of the internet, he added.

“We have a worldwide footprint with Red vs Blue, with distribution deals on Netflix, iTunes” and more, said Burns.

“But it was also important for us for building our business on a creative level,” he went on. “We grow all our productions organically. We started making these shows because no one was making shows like these. We speak with a genuine voice.”

And when conceiving new shows, they look at what made existing shows great. “What takes Red Vs Blue to 13 seasons? We’ve sold over 1 million DVDs,” said Burns. “How do we service the audience but find a way to grow it?”

Red vs. Blue happens to work really well in English-speaking countries, but doesn’t penetrate Asian markets; the scripted comedy and delivery are too difficult for users to follow.

Rwby was CrunchyRoll’s No. 2 most-watched show for anime lovers by its first season. And with help from distribution partner Warner Bros. Home Entertainment, it will soon be the first Western-produced anime to be imported into Japan.

Another online show Rooster Teeth’s produced, still in its first season, is Social Disorder. It averages 10 minutes per video, with 15 minutes of additional content. It rides on the success of social experiment shows, and Burns believes it has “huge international appeal as well”.

Finally, a better-known recent Rooster Teeth production is Immersion, which answers the question, “If you could play a video game in real life, what would it look like?” Below is the episode for Mario Kart.

“We’re about to start production on our 3rd season” of Immersion, said Burns. “Like Social Disorder, it’s shot in 11-minute chunks, so they can be put together as a 22-minute package as well. We’re currently looking for international distribution.”