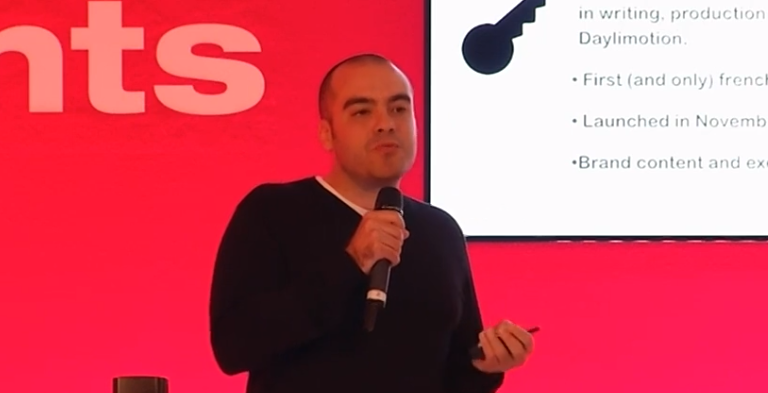 This special set of digital screenings, hosted by CEO Drew Baldwin of Tubefilter, was a sampling of perhaps lesser-known MCNs from around the world: Israel, Malaysia, France, and the Netherlands, respectively. Here’s a quick recap of each screening.

MeMeMe Studios, presented by co-CEO Anat Szekely, is touted as “Israel’s first and only MCN” and is part of Dori Media.

MeMeMe joined YouTube in ’07. “As soon as we launched, creative came flocking. Everyone was searching for an outlet,” she went on.

There was just one problem: Most produced content in Hebrew, which is spoken by about nine million people in the world. It doesn’t travel. So what is there to do with all this great Hebrew creative?

MeMeMe decided to invest primarily in:

– Ready for dub. Global lifestyle or shared-interest channels, like yoga videos, shot and edited in a way that lets you add narration easily over the top.

– Israeli areas of expertise. When you’re an expert, having iffy English isn’t such a big deal, said Szekely, who quickly screened video of a female Krav Maga expert.

– Tapping into the multi-language culture that already proliferates within Israel. “Israel is a country of immigrants,” and it’s filled with speakers of Arabic, English and other languages. Their audiences are much larger worldwide than a Hebrew-speaking audience alone.

Next was Desmond Ngai, vice president of strategy and partnerships at WebTVAsia, which, in the past year, has produced content for the following six territories: Pan-Asia, Taiwan, Malaysia, China, Thailand, and Hong Kong. It launched in late 2013.

One example of work they’ve done are Little Apple videos:

The campaign was conducted over three months with a song that drew from an original sung by the Chopsticks Brothers in China.

“We produced official parody versions in Korean, Taiwanese, Thai and Malaysian,” with a 360°, multi-platform scope, said Ngai. 30.000 fan-made versions were created as a result of the four videos it made.

Here are some do’s and don’ts for penetrating the Asian market:

– Don’t treat Asia as a single market. One size doesn’t fit all. “What we did in the four versions we produced was, for example, in the Korean version, we engaged one of the top hip-hop stars, T-ara, and used the director who did Gangnam Style for the video,” said Ngai. “We treated every market individually and separately for fans and advertisers.”

– Don’t underestimate the sensitivities of the Asian consumer. “Thailand is a closed market,” Ngai said. “They only watch Thai content produced by Thai producers, so our team there is completely Thai. One sensitivity: Don’t stereotype. In our video, we don’t feature anything with sexual innuendos. It has to really fit with their sensitivities. Even the words in the lyrics have to fit.”

– Don’t burn out too fast. Pace yourself; it’s a long haul. “Asia is huge, and we took 1,5 years to reach 6 markets,” said Ngai. “Some of our friends and competitors can reach 50 markets in 6 months. That’s possible… but often that happens because you were ignoring the first two don’ts, and burnout is what happens.”

“If you have limited resources and manpower, pace yourselves like us,” said Ngai. “We’re in this for the long haul… We want to focus on the key formats that will be the most impactful.” So the next round of a campaign of, say, a Little Apple 2.0, can only occur after learning the sensitivities of each market.

– Invest wisely in your talent. “Our friend from Israel said it’s important to know what your talent is good at. Don’t treat them as a commodity. In Asia, a strong personal relationship with talent is important, regardless of where they’re from,” said Ngai.

– Find your niche. “If you have a chef that cooks great kid food, that’s his niche. Don’t force him to cook things that aren’t for kids,” said Ngai. “We want to identify verticals that apply to specific markets.” China’s most popular genre is comedy, for example. And its comedy is very different from comedy in Taiwan, Hong Kong and Malaysia—even though there are plenty of Chinese-speakers there.

“We are 100% independent. All production is produced by us,” said Plessis.

Other things you can expect from Dim Sum:

– Dim Sum Academy, which helps actors, writers and directors develop their talent in exclusivity with Dailymotion. “Talent is key,” Plessis stressed. “The only advice I can give you is that we have to focus on talent first.”

– It’s the first (and only) French MCN on iOS and Android.

– A niche but highly-engaged market. Dim Sum launched in Nov 2014 and has since scored five million views. “Some videos have a lot of success; others, no. But the most important thing is that we can show what these people can do. We are focused on a long-term cooperation with them,” said Plessis.

Lastly, CEO Jan Riemens presented zoomin.tv. zoomin focuses on short-form, hosted programmes and live. It also relies Also relies heavily on video journalism, particularly “stories that aren’t being told” — like the story of the woman who, after carrying a stillborn baby for 36 years, finally gave birth:

“The MCN space is a buzzword. It has been for a couple of years, especially on the values side,” Riemens began. “An MCN in itself isn’t really very valuable. It depends on what you do with it.”

– It’s the 7th-largest MCN on YouTube. “As a EU company,” Riemens stressed (it is Netherlands-based). “The other six are Americans, and the other nine behind us are American as well. It’s tough to be a non-American in this space. But it does help to know content.”

– Its channels are localised into 17 languages.

– It gets four billion views per year across over 50.000+ channels.

Riemens went on to say that production is managed tightly in order to keep costs down and stay efficient. “An eCPM on YouTube is $2,” he said. “How can we raise that to a normal level? At this point, producing a video for a publisher is more expensive than putting an ad out there. We need to change the KPIs on our businesses; you can only do it with scale and low, efficient production costs.”

zoomin.tv is well-equipped. “The world needs tons of footage,” said Riemens, “and that’s all available in the MCNs. This is how the future’s going to look; the basis of every website will be moving images.”