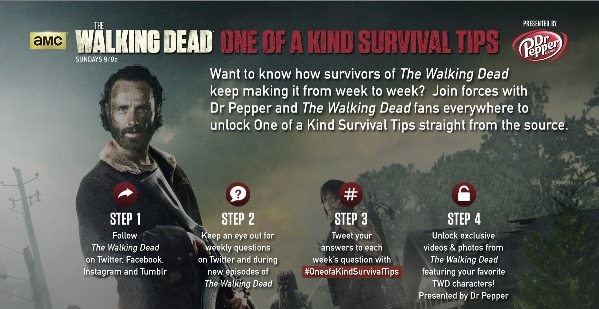 Find out how the most popular live shows are engaging fans with thrilling social media campaigns.
By Matthias Puschmann on February 20, 2015 0 Comments 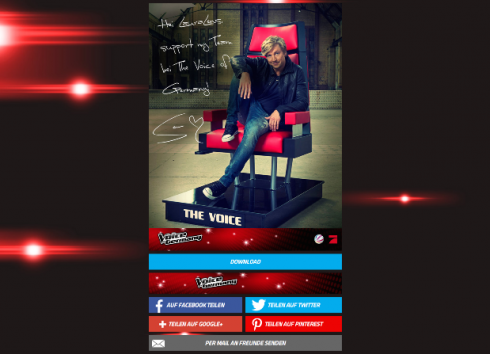 The live shows of the local adaptation of the singing competition “The Voice” started airing at the end of 2014. To engage fans, German broadcasters ProSieben and Sat.1 teamed up with Twitter and Idolcard to provide fans with personalized digital autograph cards of their favorite coaches. The initial launch of the social campaign was promoted in a Vine video and on the show’s website.

In order to receive their digital autographs from either coach Samu Haber or coach Rea Garvey, fans needed to have a Twitter account and compose a tweet with either the hashtag #TVOGSamu or #TVOGRea to @idolcard. A few minutes later, the autograph card was being provided by @idolcard in a personalised tweet.

Furthermore, the tweet contained a link to idolcard.com to download the autograph card and share it with friends via various social media platforms. Idolcard is a tool that provides fans with digital autograph cards of their favorite celebrities or sport clubs. On the day before the official launch of the social campaign, more than 6,000 idolcards were already created. One of the coaches’ hashtags was in the Twitter Trending Topics during the whole day.

Overall, more than 125,000 IdolCards were sent out to “The Voice” fans. The official Twitter account gained around 15,000 new followers since the launch of the social activation campaign and the “The Voice” handle achieved +300% more mentions during the campaign in comparison to regular days.

In late December 2014, Starz‘ pirate-themed drama series “Black Sails” announced the ‘#TakeWhatsYours Treasure Hunt’ on its official social media accounts. On January 10, 2015, fans of the series had the chance to win two $5,000 grand prizes by finding the two treasure chests hidden in two cities somewhere in the US. The campaign was designed to promote the second season of “Black Sails”, which premiered on January 24, 2015. 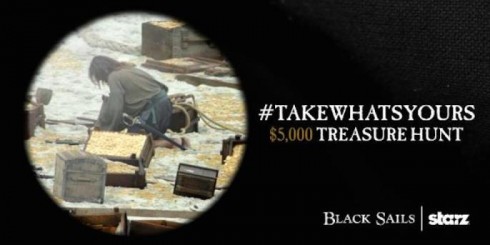 On January 10, the official “Black Sails” account on Twitter posted clues that helped fans participating in the Treasure Hunt to find the two secret locations of the treasure chests. At each location (a tower near Santa Monica pier in Los Angeles and the Trinity Bar and Restaurant in New York City), there were 25 keys to be found. Each key was marked with a four-digit code, but only one key in each city had the winning code that unlocked the treasure chest.

On the same day, fans not being able to participate in the outdoor Treasure Hunt had the opportunity to win one of three $500 cash prizes by correctly answering series-related trivia questions in an accompanying ‘Trivia Questions Sweepstakes’. The ‘#TakeWhatsYours Treasure Hunt’ resulted in a 400+% increase in Twitter activity that day. The official hashtag #TakeWhatsYours generated more than 5.8 million impressions.

THE WALKING DEAD: ONE OF A KIND SURVIVAL TIP (AMC, USA)

To engage fans during the second half of the fifth season of “The Walking Dead”, AMC launched the social campaign ‘One of a Kind Survival Tips’ on February 9, the day after the return of the season. Every week after a new episode aired, fans of the series will be asked to answer the question of the week to unlock exclusive photos and videos of the cast of “The Walking Dead”. The campaign is presented by Dr Pepper. 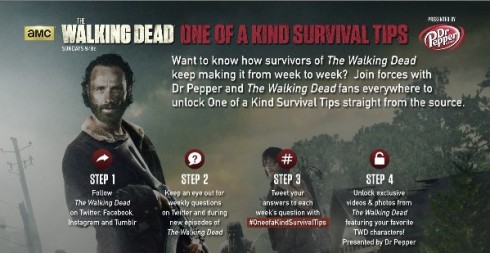 The weekly questions for the fans to answer are featured on air during the new episodes and also shared by the official “The Walking Dead” account on Twitter. Fans are called upon to tweet their answer with the official campaign hashtag #OneofaKindSurvivalTips. After a certain number of tweets is reached, “The Walking Dead” and Dr Pepper unlock the exclusive content, in which cast members of the series reveal their survival tips in a zombie apocalypse. 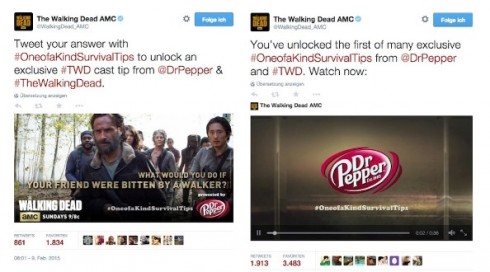 On a dedicated campaign website, fans are provided with all the exclusive content they have unlocked so far. In addition, the website features a social wall aggregating a selection of fan tweets using the hashtag #OneofaKindSurvivalTips.