In our loud, media-heavy environment, where our minds are exposed to an incessant bombardment of information, comedy truly can be a game changer. It can amplify your message. It can take a harsh, complicated reality and turn it into bite-size portions that are easier to digest. It can make strong bonds between strangers and help diminish fear. What’s more, humour sticks. And, no less importantly, if the world can laugh at its deepest faults, where is the room for hatred?

Comedy can also be a weapon — a weapon so effective that world leaders fear it. From the North Korean leader, to the Charlie Hebdo attackers, and all the way to the Syrian regime that recently broke the hands of a known caricaturist, the incredible power of humour to threaten the status quo is known, and clearly distressing to those with something to lose.

A few weeks ago, we — the international comedy community (a.k.a. my MIP buddies) —decided to put our God-given gifts to good use. No commercial sponsoring, no governmental funds — just brave people, sans nations or hidden agendas. Everyone, from BBC’s director, Danny Cohen, to ABC’s SVP of casting, Keli Lee, came on board for the craziest idea for a conference aimed at exploring ways to use comedy to make the world a better place. We called it Comedy for a Change.

Imagine the following scene: a stage set for peace talks, two Israelis on the right, two Arabs on the left and a savvy moderator in the middle. Now, try to picture it with comedians in the places of your traditional negotiators. No attempts to be diplomatic, no two-faced, slimy politicians; just the ridiculous truth. And in Jerusalem, no less; the very heart of the bloody long (or long bloody) Middle East conflict.

We did it. Ghazi Albuliwi, a Palestinian comedian, opened by saying that Israel is so isolated, they’re going to start sending Ebola victims over here for quarantine. Lior Schleien from Israel’s side replied, offering the entire country to the Palestinians, but only during the month of August. The audience was laughing, cheering, and sometimes even wiping tears from the corners of their eyes. We had created an atmosphere of laughter and diplomacy between two parties that are known across the globe to be constantly at odds with each other.

Video: Writers from leading satire shows in the US, the UK and Israel discuss the secret to making relevant comedy:

In the middle of all of this — and I have no idea if ISIS was involved — the power went out. Incredibly, though, the energy in the room was so powerful that we continued. It was inextinguishable, magical.

A veteran diplomat in the audience who had been involved at the last round of the Middle East peace negotiations called me aside at the end of what we had come to call, affectionately, “The Non-Diplomatic Peace Talks,” and whispered in my ear that this 45 minute session was much more intelligent and effective than the “real peace talks.”

The Comedy for a Change conference was a first-of-its-kind international event, and it was surreal: hundreds of people gathered in Jerusalem for two days to explore comedy’s potential to be a game-changer in all the fields about which we are passionate; from politics, to disease awareness, to women’s rights, and beyond.

Video: Cruel roast of the Mayor of Jerusalem by Red Orbach, Israeli Puppet and TV star:

Through some amazing and unprecedented things — challenging the best viral campaigners to create videos to combat cyber bullying; pairing social organisations with ad agencies to generate hilarious campaigns for women rights, eliminating racism, and more; conducting social experiments to test comedy’s ability to transcend the boundaries of time and place; and yes, fostering positive interactions between Israelis and Palestinians — we proved that comedy is more than half-time relief. It has real social power.

When Jon Stewart did the impossible and turned the economic crisis into something funny and approachable, it was a game changer. When Modern Family portrays a married gay couple and turns the concept from the demon to the prime time norm, it’s a game changer. When the entire western world challenges one another to pour ice buckets over themselves in a silly gag, prompting those same individuals to learn about a not-so-sexy, previously little-known disease, it’s a game changer. When Israelis and Palestinians willingly walk into peace negotiations (even funny ones) and come out laughing—that is THE game-changer.

Video: Danny Cohen, Director of BBC Television, talks about the power of entertainment and major changes in the TV industry:

If there is one lesson I can share from the conference is that no matter what our position is — a commissioner, a writer, a producer or anyone else on the creative chain — we have much bigger power in our hands than we think. Content can make the world a better place and we are the agents of that change. It’s our responsibility and privilege to make that change in the world. International TV markets like MIP open opportunities to amplify our impact in a much easier and bigger way than before. So I challenge you to make your own Comedy for a Change – we are here to help. 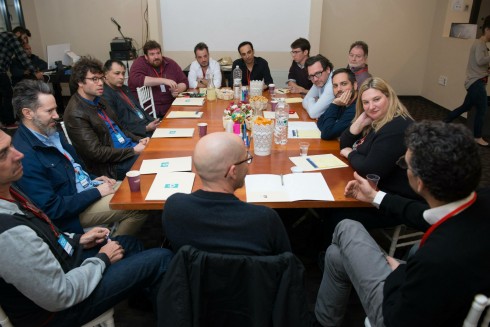 The most international writers room: 14 leading writers from 14 countries write one sketch together for Israel’s most popular show, headed by the executive producer of The Daily Show (bottom right).

Omri Marcus is a regular contributor to MIPBlog, and head of creative at electric-sheep.tv.

Omri Marcus is head of Screenz Originals - a division of Screenz Cross Media. His role is to make things interesting by connecting entertainment and technology. He is also the founder of Comedy for Change, an initiative that connects prominent content professionals from around the world to push social change. Marcus is a frequent MIPBlogger & MIP-goer.