Caroline Beaton: What I learned at MIPCOM 2014

“Just two years ago the idea of ‘everything everywhere’ was still seen as a huge ask, and now it’s the norm,” Viacom International’s senior vice president Caroline Beaton told us before MIPCOM 2014. Now that the show is over, she explains what takeaways she’s brought home from Cannes.

The Importance of apps in the launch of new shows

Dora & Friends (top photo) is Nickelodeon’s new take on the classic series, with Dora both a bit older and also living in a city with real friends, as opposed to the imaginary world of Dora the Explorer. The fact is that it’s always risky to change any winning formula and even though the US launch has been a ratings success, I was nervous about how buyers would react in the lead-up to MIPCOM. But when the app went straight to number 1 Kids and number 2 Education in iTunes right after the broadcast launch, it really helped to reinforce the multi-platform appeal of the series. Even with a show that is aimed at pre-schoolers we have to recognise that our young viewers are immersed in the multi-media world, and they embrace apps and the world of touch screens instinctively.

From Linear to SVOD

I also noticed that in the Nordic territories, where so often we see media trends breaking first, new shows, particularly in the kids and family space, are increasingly going straight to SVoD rather than being shown on linear channels. This is something I believe will start to happen elsewhere, as viewers of all ages fully embrace the idea of à la carte TV.

Comedy Central is more than ever seen as a home for growing fresh new comedy talent, taking up a role that Saturday Night Live has always had. The big difference between Comedy Central and SNL is that CC sources much of its new talent from the internet, which gives it a pretty much unlimited hunting ground. Recent headline successes broken by CC in the US include Stephen Colbert replacing Letterman, and with season 2 of Broad City (photo below) launched six months ago at MIPTV, Amy Poehler and the cast are becoming seen as serious names in comedy who are increasingly in-demand in Hollywood. We also have two upcoming new series featuring names more associated with movies, one featuring Ben Stiller as executive producer of our next scripted show Big Time in Hollywood, and the other an animated show featuring Rob Lowe. 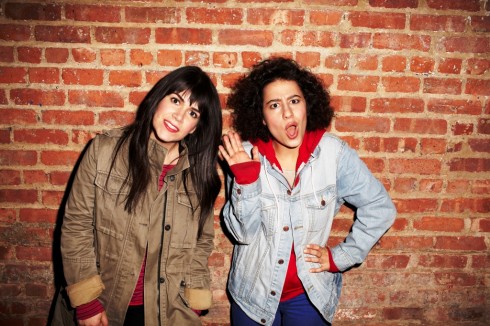 We are increasingly building strong synergies between Viacom and Paramount Studios. There’s a Teenage Mutant Ninja Turtles movie out now which is performing well and creating more demand for the TV show and merchandising; we have a SpongeBob SquarePants feature film in the works due for release next year; and Viacom will also be distributing Paramount’s School of Rock TV series in 2015. That adds up to a lot of crossover traffic between TV, the movies and consumer products. Also in a broader cultural sense, Catfish, which started out as a movie, is now part of the cultural language of our times, as well as being one of the most successful TV series and formats that MTV has ever been involved in.

There’s a re-ordering of demographics

There was a lot of talk amongst industry people at MIPCOM about the lack of shows that have multi-generational appeal, a show that could conceptually appeal to a 16-60 audience. And while we all recognise that it is only getting harder to find that sweet spot, there is definitely a gap in the market. Of course I’m hoping that Big Time in Hollywood will be one of the shows in 2015 to deliver that broad appeal, and MTV’s Finding Carter has also been met with a positive response in terms of the breadth of its appeal, In terms of kids’ programming, a lot of people feel that there has been too much emphasis on shows that either appeal to 2-5 year-olds, or 6-11. But what about 4-9 year-olds? It’s a demographic that has plenty to say about what they want to watch but there is not a lot of programming tailored specifically for them, so I see opportunities there as well.

Caroline Beaton is senior vice president, international programme sales, forViacom International Media Networks (VIMN). This is the latest in a series of posts by MIPCOM influencers; read our interview with Beaton here.