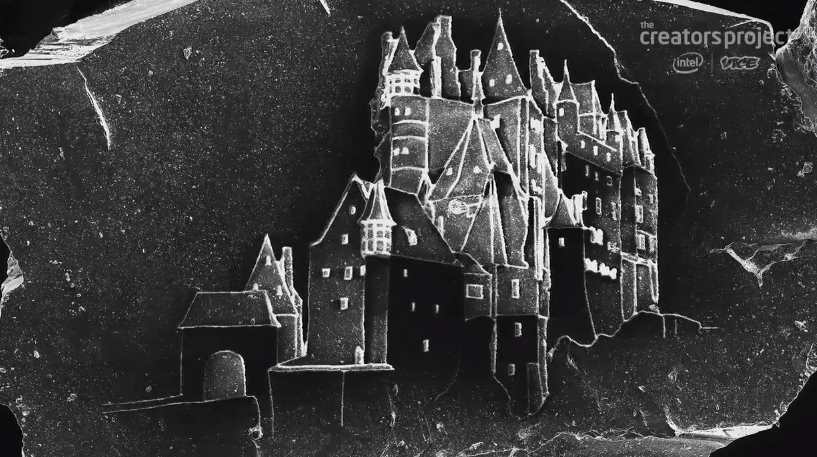 Creativity abounds on Vine, for Earth Hour, and for a children's charity via DailyMotion!
By Yassia Fekir on April 2, 2014 0 Comments

Launched in 2010, the pioneering partnership between Intel and VICE continues to showcase some of the world’s most eye-catching and inspiring creativity – such as Etching Sand Castles On A Single Grain Of Sand, above – under the banner of The Creators Project.

Honoured at Cannes Lions, the Webby Awards and at MIPCube’s 2013 Brand of the Year Award, The Creators Project has become a world-leading arts and culture channel on YouTube (434k subscribers), and boasts 685k Facebook fans and 54k Twitter followers.

In 2013, The Creators Project teamed up with artists such as Daft Punk, Phoenix, Queens of the Stone Age, Broken Bells and Arcade Fire, to create innovative and original content for The Creators Project’s YouTube channel. What, dare we ask, could possibly be next?!

VICE is a platform partner of the MIP Digital Fronts, and will be revealing exclusive new video content at their session, April 9. More info here…

Condom brand Durex has always targeted a young audience (14 to 35 years old, dominantly men), by using social media (it notably has 655K fans on Facebook) or TV channels like MTV, partnering with great events to collect money for AIDS research, and publishing an annual sex survey.

This year, Durex launched #TurnOffToTurnOn. Produced by London agency TMW, its trailer alone (above) has already attracted over 8m views on YouTube.

Ten couples are filmed in their everyday life. They seem together but every couple is distracted by their smartphones, iPads, and it appears that they fell totally disconnected to each other. Indeed, Durex’s own research suggests 40% of couples believe technology is adversely affecting their relationship.

So the hashtag means that they have to turn off to turn each other on. The campaign ties in with Earth Hour, which encourages everyone to stop using electricity for one hour each year, to raise awareness about climate change.

The campaign ran in Australia and 55 other countries last weekend, with the tagline #TurnOffToTurnOn.

“Durex believes nothing should get in the way of great sex but our growing obsession with phones, laptops, TVs and tablets isn’t bringing us closer together, it’s pushing us apart. So for us working with Earth hour is a perfect campaign fit to get across that message, let’s all turn off to turn on,” said Ukonwa Ojo – global marketing manager, Durex.

Though it’s too soon to say what the results of this innovative campaign were, it certainly couldn’t be more timely!

Samsung definitely created quite a buzz with Ellen DeGeneres’ now infamous Oscars selfie (taken with a smartphone the brand had lent to her); this shouldn’t overshadow Samsung’s equally impressive creativity with its Vine basketball ads, where an animated player jumps through the brand’s products to score a slam dunk… all in just 6 seconds!

The campaign led Samsung to be named “The Most Shared Brand” of 2013 — with a total of 7.3M of shares — at Unruly’s inaugural Video Sharing Awards, late 2013.

The Korean technology company definitely knows how to go viral, and is constantly innovating when it comes to social media strategy. And it seems to be paying off: Samsung has 2.3m Facebook fans, 7.85m Twitter followers and 810K suscribers on YouTube.

US battery brand Energizer decided to launch a new programme called Positive Energy in France in association with video platform (and MIP Digital Fronts platform partner) DailyMotion. “La Glande Utile”, which translates as “Useful lazing around”, was created to help children’s charity Pas d’enfants sans vacances. It means that the energy spent watching these videos will be converted in euros to be given to the charity. The majority of the content comes from one of DailyMotion‘s most-watched accounts,  Spi0n (455m views).

In just one month, La Glande Utile has been viewed 8.9M times on Daily Motion, which translates into nearly €18,000 for charity (€2 will be granted for every 1000 views). Furthermore, the project’s  Facebook page has attracted 166K fans, and its Twitter account 18.9K followers.