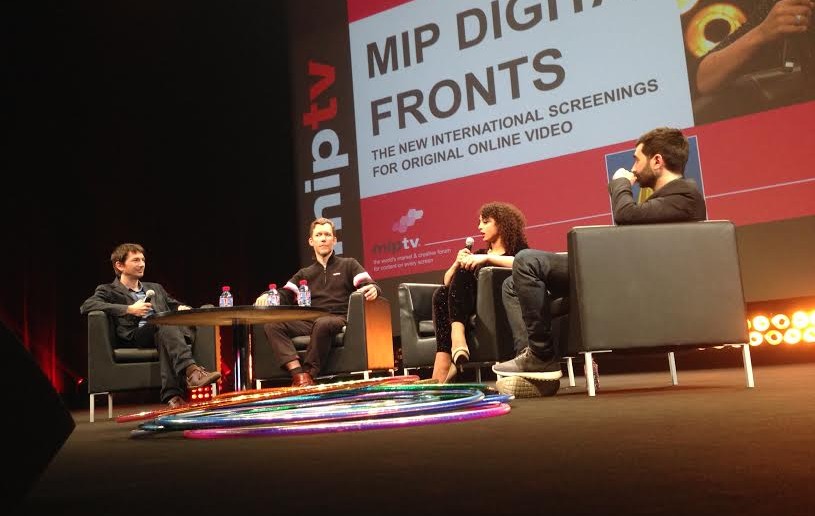 Their first guest was David Carlier, a founder of Freeride World Tour.

At du Chéné’s request, Carlier quickly briefed us on Freeride. “It’s like ice skating. It’s judged by judges. We do a lot of content as well on the judging to explain it to the public, so people can understand why one guy is first and the other guy is tenth,” he said, but “the judging criteria are evolving with the sport. Progression is a very important point for us.”

There are also other ways in which Freeride is unique. “We’re not part of any federation,” said Carlier. “We’re a private company organising a world tour, so we act as a federation. But athletes need to drive the sport, and they decide how the sport evolves.”

One more challenge? Freeride has no stated “place”. “We don’t have a stadium; it’s not like a tennis or football match, where people have a place to sit,” Carlier said, which makes quality content delivery in real-time important for them. “The key is to deliver good content and fast, so people can watch it on the spot. Livestreaming is really big up for us.”

One of the benefits of working with Dailymotion are the customisable perks it brings to the table. Freeride is now able to livestream its events, and experiment with different types of formats, not just news highlights. And because Freeride doesn’t air on primetime hours, replay is key.

“The feed is now more the central pillar of communication,” said Carlier.

Dailymotion also enables Freeride to cut every run on the fly, because, according to Carlier, “sometimes people just want to see one rider” — and share that rider’s run — versus watching the whole team.

“Dailymotion provides a huge, aggregated audience,” said Carlier, “But we also have this personal relationship with people that’s important to maintain. It combines the best of both worlds for us.”

After Freeride came Marawa The Amazing, ‘World Conquering Hula Hoop Master’, who holds the record for the highest number of hula hoops hooped at the same time.

She hit the stage with an impromptu performance:

After her energetic dance, Marawa collapsed into her seat and announced that she broke the world record for hula hoops again, just two days ago: She’s now at 160 hula hoops hooped simultaneously.

Marawa received a bachelors degree in circus arts in Australia (a profession that she’s since pursued but admits is hard to explain to people, who don’t “understand that you can make money that way”). She briefed us on the changing face of the circus.

“Circus is a huge industry now,” said Marawa. “It’s not traveling in a caravan, in a little tent with some animals. It’s corporate now. I do lots of corporate events, theatre shows, videos. The show I’ve been working on, La Soirée — we’re currently in NY, and we’ve played lots of seasons all over the world, and won the Olivier Award for entertainment.”

As a teenager she grew up watching videos on Dailymotion, so she really wanted to work for them. She often uses it for promotion of her site and her own work. One of her first shows was Hoop Fighter, a kind of cross between Street Fighter and Fruit Ninja (someone throws fruit at her, and she deflects the fruit with her hoops).

For Marawa, Dailymotion is great for “being able to do things like that — which, obviously in a live performance, you can’t do.”

She also does a series to showcase her friends and colleagues from around the world. “Watching a lot of videos, I found that the running theme was novelty — quality novelty. I wanted to make a show for all the performers and acts that I know,” said Marawa. “When I travel I meet people who can do really strange and specific things. I wanted to find a way to record and keep those moments.”

“She was the first partner to discover the Dailymotion studio in Paris,” boasted de Chéné. When she first pressed Dailymotion for use of the studio, it wasn’t yet fully built, but they let her do it anyway.

Partners can access studio time easily (especially now that the studio is ready). They simply go online to access the calendar; describe the project, the type of stage they need, any other equipment needed if necessary.

“It’s been really great using the green screen, and blacking out the room to use the LED hoops,” said Marawa. “The space in Paris is genius. There are so many rooms. Depending on the project, you’ll find a room to suit it.”

“The idea isn’t just to open a production studio,” said Eychenne. “There are already a lot in Paris. It was to have a cool space where people can meet and share ideas.”

In closing, Marawa expressed her desire to break the world record again: “I’m gonna go for 190 by the end of the year.” See her at a La Soirée show, currently touring the US.

Follow the MIP Digital Fronts live from Cannes today and tomorrow, only on MIPBlog!