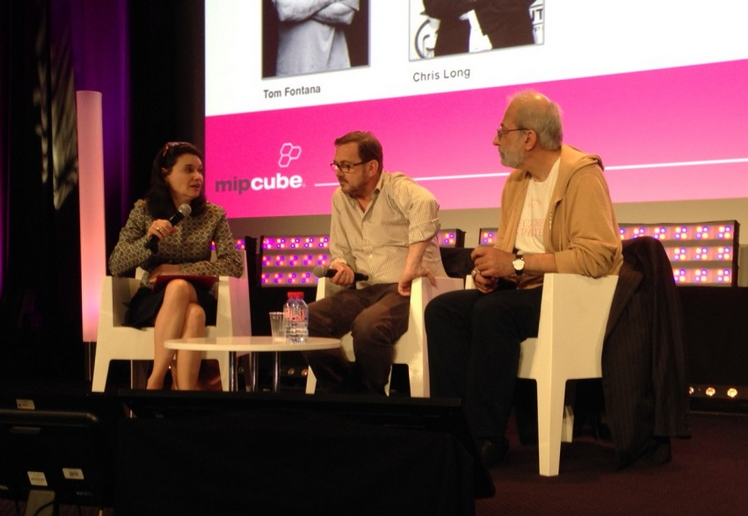 For this session we were treated to a sit-down with Chris Long, who produced Gilmore Girls and who presently produces The Mentalist; and Tom Fontana, the creator of shows like Oz and Borgia. For simplicity, moderator Anna Carugati’s questions will appear over their answers.

What have been the biggest challenges you’ve encountered in keeping your shows fresh season after season?

“When we finished Oz, I’d run out of ways to kill people. HBO wanted to keep going, but I felt it had run its course,” said Fontana. “If you establish really good characters, they’ll continue to feed you their lives. And if you have wonderful actors, then you just have to listen. That’s the element: listen to the rhythm of the actors.”

Long agreed. “Simon Baker’s kept us on for years. He is the heart and soul of the Mentalist. Keeping that on for six years is the tricky part. Often in American TV, when you don’t know if you’re getting picked up or not, you can tend to peak too early. Out of the gate we were a hit worldwide, so we knew. It was easier.”

One creator told me S3 and S4 are toughest seasons. Is that your experience?

“Every show is different,” said Fontana. When André Brauer left Homicide, it was a seismic change in the show. It took half a season to get our bearings back. But in terms of stories, I never really had the ‘what to do next’ problem. It’s easy when you do a show about homicide because there’s a homicide every single day, unfortunately.”

“We hit our stride in season 3 or 4 (of The Mentalist),” said Long. “I think we hiccupped in the first season, where the show swung from its darkest moments to its lightest moments.”

How do you feel about the latest trend of shorter-season runs?

“Because of this limited-series idea, we can do different kinds of storytelling,” said Fontana. “You also attract a different kind of talent because people can commit to a shorter period of time.”

Do you have leisure time to shoot or write multiple episodes during shorter runs?

“With Borgia we’ve been shooting three episodes at a time. Because we were shooting in four different countries, and we had scenes in those countries. In the end we were shooting seven episodes simultaneously, which was fine for me because the writing was done, but terrible for the actors. They had to constantly be aware of where they were emotionally. But it was the most efficient way to shoot.”

“I heard that for True Detective they shot all 8 episodes together,” Long mused. “It’s an amazing feat, I can’t even imagine how long that script was.”

This then led to a conversation about what both of them watch on TV. It turns out that neither watches shows while working on one.

“When we were doing NYPD Blue, I was writing a scene, and I was like, ‘Oh my god, what a good scene!’,” recalled Fontana. “Then I realised, ‘Of course it’s a good scene, David Milch wrote this’! I had plagiarised in my mind! So I don’t watch during shows, I just binge-watch afterward.”

“I don’t watch any TV during work either, just because there’s no time,” Long added.

Long, do you work much with directors and show creators?

“I’ve made my living working hand in hand with people like Tom,” said Long. “The vision of a show, gives me more authorship than in a film. I don’t see myself as an obstacle to directors; I want directors to have opinions. Our actors want to be directed; I’m in charge of the overall vision and look. The director’s role has gotten bigger.”

He went on to say that a higher quality of director is coming into TV, because the money in film isn’t what it used to be.

“With Borgia I didn’t know any European directors,” said Fontana. “I had to pick the men and women I worked with on faith. Their work was tremendous, which was why I hired them. I had an incredibly close relationship with each. Especially when you’re shooting seven episodes together.”

Of course, there are challenges to working on a project of Borgia’s size.

“They didn’t want to hire US DGA members. I forced them to hire Writers Guild members because I’m a union man, but that was as far as I could push it. It was really about maintaining the balance of the money,” said Fontana.

He added that “Borgia was a hit in multiple countries. If it had happened in America it would have moved forward instantly, but because there were so many partners, it took a long time to get greenlit and start writing. That’s the down side to the whole global model.”

There are also differences between working on network versus cable TV.

“With network TV we have to hit a time every week,” said Long, “whereas with cable you don’t have that. The things that get lifted are moments and production value. That’s a hard figure to hit, it’s something like 44 minutes and 60 seconds.”

This difference also asserts itself in the content, according to Fontana, who pointed that out while addressing a question about the current proliferation of “dark” characters on popular TV series today.

“It’s a cycle,” said Fontana. “Somebody sees something they like, then twelve are made.” But he hastened to remind us that cable viewership is much smaller than network viewership. “If every show on TV was like that, most people wouldn’t watch TV. Most people don’t want to see the kinds of screwed-up characters on cable.”

What considerations go into canceling a series?

“There’s many,” said Long, who pointed to the success of The Mentalist — its worldwide audience is 50 million viewers — but observed that it hasn’t yet been renewed for a seventh season. “Deals are being made right now. Whatever deals are made, we’re pawns in that game. And it’s a game that’s played every single year.”

“The longer a show goes, the more expensive it gets,” said Fontana. “All the talent [pay]increases. And unless people wanted to take cuts in pay, that becomes problematic, where the line between profit and cost becomes negligible.”

Sometimes it’s just whimsy. Homicide did well in its slot, but “somebody found a light, romantic British comedy and decided to get ride of that “dark and brooding homicide show” but that only lasted six episodes. By that point we were gone. I don’t often smile when a show gets canceled, but I do for that one,” Fontana admitted with a laugh.

Do you have a preference between pilot or straight-to-series?

“Everybody says ‘how much longer can pilot season in America continue this way’? It’s a crazy system!” said Long. “It’s good because you know right away if you’re going to move forward. But it’s not conducive to getting talent and the money they want.”

“The only people who really enjoy pilot season are the agents,” Fontana said. “They can pit one thing against the other and get the best deals for the client. But from a creative point of view, it’s unbearable. It’s hard enough to get it right without having to look over your shoulder or sometimes up the butt of the competition.”

Are there any future projects that you’d like to get on-screen?

“I have a thousand,” Fontana admitted. “My biggest fear is that on my deathbed I’m going to get the great series idea.”

“I’m looking at a thing in England at the moment,” said Long, who also took the opportunity to plug his documentary, A Tale of Two Thieves, which did its closing screening at MIP on Sunday. “I’m very excited about it, about moving more into something beyond drama and scripted programming.”

Asked whether documentaries would interest him, Fontana mused, “I think it takes a different skill than I possess. I always want to improve on the story … so I’m dangerous in documentaries.”