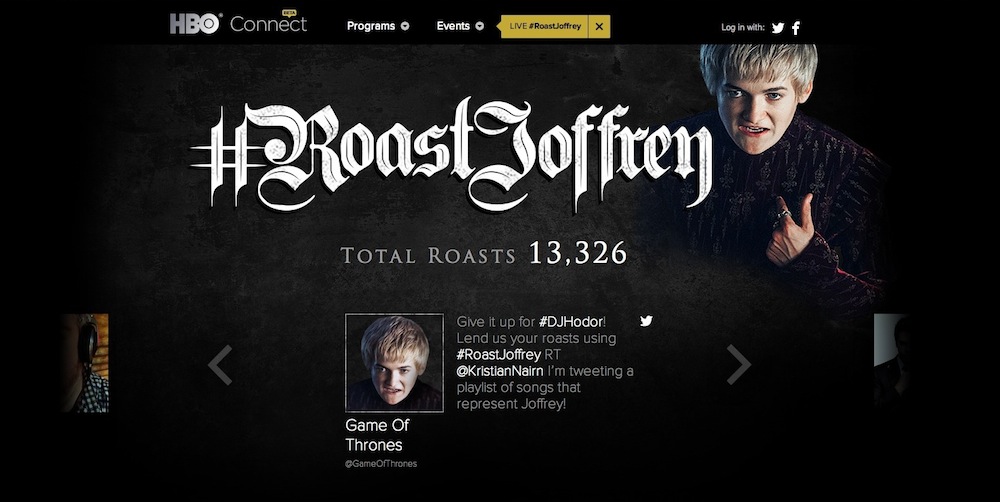 Which networks and shows are innovating in social TV right now?
By Matthias Puschmann on February 6, 2014 0 Comments

HBO launched a special community event on its second-screen platform HBO Connect on December 12, 2013. Fans of “Game of Thrones” were invited to a so-called internet roast to lampoon King Joffrey Baratheon – a main character of the drama. He is one of the most hated fictional characters in TV history. In 2013 only, more than 30,000 Tweets with his name and the word “hate” were posted.

To celebrate the roaster, HBO introduced the hashtag #RoastJoffrey to be used on Twitter, Vine, Instagram and Facebook. The campaign started with a short intro video on YouTube and a Tweet with a photo of King Joffrey and the hashtag #RoastJoffrey. A social tracker with selected posts, Tweets, videos etc. can be accessed at RoastJoffrey.com. In the first five days after the launch of the social campaign, more than 63,000 roasts were contributed. 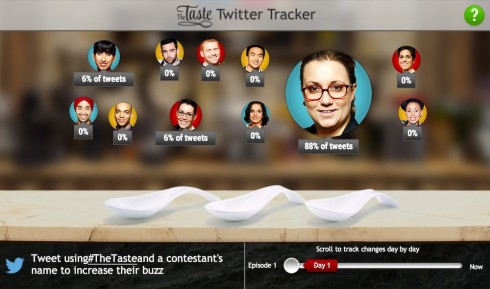 Channel 4 launched a Twitter Tracker for its new cooking competition “The Taste” in mid-January 2014. The tracker went live with the second episode. It provides real-time visualization of each contestant’s popularity on Twitter. Every time when the official show’s hashtag #TheTaste and a contestant’s name is mentioned on Twitter, the tracker collects the data.

The more often a contestant is mentioned on Twitter, the bigger their face icon appears in the tracker. The percentage of all tweets that each contestant has received are displayed below the icon. Additionally, the top 10 descriptive words for each contestant and his dishes are featured – they appear by clicking on a contestant’s icon. The hot nor not meter calculates the sentiments of the contestant-related tweets.

To check how the social development of each contestant has changed since the series premiere, users can swipe a bar on a timeline containing each episode. The social TV tool was developed by Corporation Pop and can be accessed on the show’s website and in the official Channel 4 app 4Now. 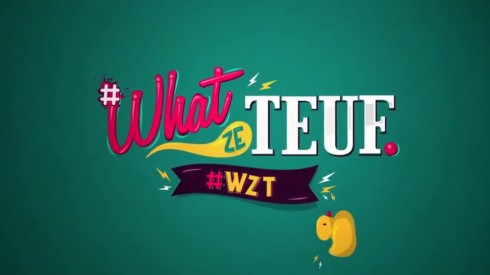 On December 2, 2013, French channel D8 launched the participatory mini-series “What Ze Teuf”. The series, which ran until December 20, was the first of its kind as it allowed viewers to be the writers of the show.

The starting point of the series was similar to the movie “The Hangover”: the main characters Romain and Michael wake up in the apartment of popular singer and comedian Elie Semoun, not remembering anything from the night before. The characters then try to find out what happened. Apart from Elie Semoun, the series also featured other well-known guest stars.

Every day after the broadcast of the series, viewers were asked to share how they would like the story to continue. They could share their ideas on Twitter using the hashtag #WZT, on the series’ official website or on the “We Love Cinema” website of BNP Paribas, the sponsor and co-producer of the series.

Each night, the production team selected the best idea and adapted it into a script. The episodes, each about 3 minutes in length, were then filmed on the next day and directly broadcast on the same evening. The user‘s name on whose idea the story of that specific episode was based on was mentioned in the series intro. The Twitter-based series generated more than 9,000 Tweets from 3,222 unique users and 3,600 proposed scenarios.