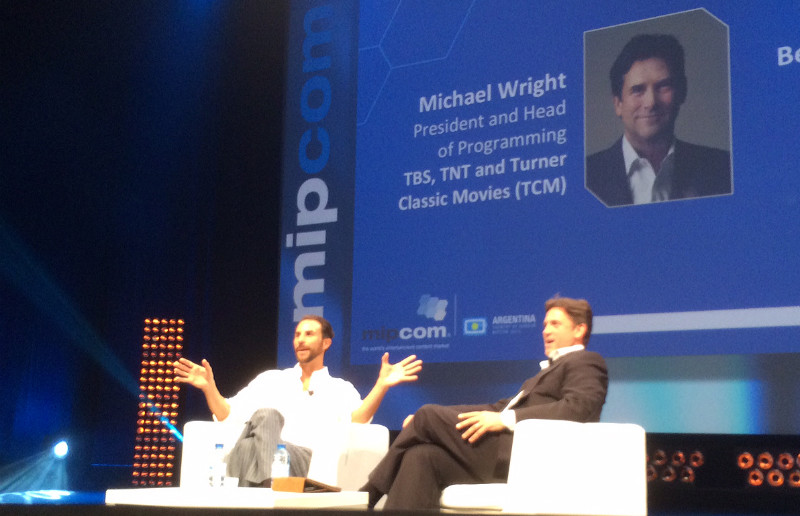 The third Media Mastermind keynote of the day at MIPCOM focused on Michael Wright, president and head of programming for TBS, TNT and Turner Classic Movies, in conversation with Electus founder and chairman Ben Silverman.

The pair sat down to discuss this week’s theme – “The new golden age of television” – and the impact it’s having on TV and film studios, as well as the talent that they work with. As well as TNT, which has been described as “smart popcorn” according to Wright. “TNT programming manages to take people on a great ride, and leave them satisfied at the end… But we always want to respect their intelligence.”

Wright suggested that the decision to watch a particular TV channel or show is an emotional decision, rather than an intellectual one: “People want an experience,” he said, before explaining how TNT and TBS are distinguished: the former is drama; the latter, comedy.

Onto that “golden age” of television, with big stars both in front of and behind the camera operating in TV. Wright was early into this, with The Closer starring Kyra Sedgwick, and also Steven Spielberg’s Falling Skies. “We try to take advantage of a lot of the freedoms that are inherent in this whole business of cable television,” said Wright.

“I remember driving all over town in LA, to the various heads of the studios explaining that TNT was going to get into the serious television business, and literally being politely laughed out of many of those rooms.” What turned this around, he said, was TNT’s effort to explain its plans to be very selective about talent, and very specific about bringing show creators in who understood the TNT brand – “all of which would allow us to get out of their way creatively”.

He stressed the importance of creating an environment where talent feel they’ll succeed both creatively and commercially, with the latter including thoughtful scheduling – “don’t yank the thing off the air after the third episode if it’s not doing well: run the show” – as well as investing heavily into marketing the shows.

Silverman wondered if there’s a difference in 2013 between broadcast and cable TV, separate to how they’re delivered to viewers.

“I don’t think for viewers make any distinction any more between broadcast and cable,” he said. “The real differences at this point are in the business models. The business model for cable I do think is advantageous… There’s a flexibility in the model, I can run a show for six hours, 12 hours, I can run it for 22. One of the big ways we’ve been able to attract talent to the network is to say ‘yeah, we’ll do eight, we don’t want to exhaust you…’ We’re still at a place where we can treat every show like the gem that it is… Everything is treated like a show that you care about and want to succeed, and I think talent picks up on that.”

Wright also talked about working with Steven Spielberg, noting that he shares the distinguishing characteristic of all talent that TNT wants to work with: an understanding of the tone and brand of the network. “You know which writers and show creators tend to work in that tone when they’re allowed to work in their own voice,” he said. “A guy like Steven Spielberg, his brand is very close to our own… He still cares deeply about entertaining the audience.”

He stressed that the appeal of working with Spielberg isn’t about his name: at best, that gets people to sample a new show once or twice. But the real key is in his approach to the show that will keep them watching in the longer term.

The pair switched tack to poaching talent – and sports bodies like the NCAA – from bigger networks. “You’re saying to them ‘look forward, not backwards’,” said Wright. “You open with ‘do you wanna be in the forward edge of the business? Do you want to be FM radio or AM? Do you want to be digital or analogue?'” But then he said the discussion about creative freedom is very important too.

“The magical thing happening right now that has given birth to shows like Breaking Bad, and Mad Men or Downton Abbey or Homeland is… when 24 premiered 10-11 years ago, the great fear in America was that this show would fail because it would serialised. If people missed an episode, they’d be out… And now we’re through that. The audience knows they won’t miss out. It’s okay to invest in a complex storyline and deeper characters, because you’re never going to be left behind.”

He added that he’s fascinated by how the financing of television is evolving. “Shows are no longer coming from a single supplier: people are cobbling together these shows: a little bit of broadcast money here, a bit of cable money there, a bit of international money there, a bit of digital money… and that’s contributing to the universality of the business.”

Wright finished off by praising his parent company TimeWarner for its focus on content, saying he doesn’t suffer from increased corporate interference as TNT’s value grows. “They are deeply and passionately committed to content, which I think is good for everybody in this business.”