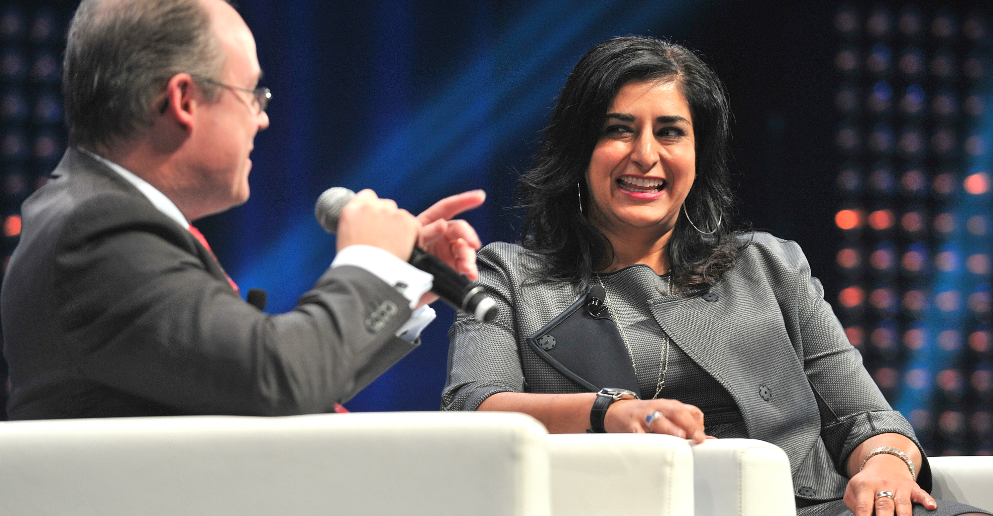 A growing number of TV companies are bringing their digital divisions closer to their traditional businesses. Metro-Goldwyn-Mayer Studios (MGM for short, as ever) is no exception: Roma Khanna is president of its television group and digital, reporting directly to chairman and CEO Gary Barber.

She appeared on MIPCOM’s main stage today, interviewed by PwC UK’s entertainment and media leader Phil Stokes (left) about MGM’s TV strategy, and the impact digital disruption is having on its business.

They started with the notion that this is  a golden age for television. “The challenge with golden age is it sounds so old!” she says. “When we talk about it being a television renaissance, I absolutely believe that to be true… It’s a joy to be working in television, and it’s nice to be in a business that’s growing.”

Is everybody winning? “Everybody can win, because it starts with the consumer. The difference is it’s a lot of work now. Nothing’s easy any more,” said Khanna. “I sometimes imagine what it would have been like to be a television executive in the 1980s when you made money while eating your breakfast cereal! Every dollar you fight for now.”

TV loomed large in the sizzle video shown before Khanna took the stage, which prompted Stokes to ask about the overall vision for MGM, and how television fits within that.

“Television is a critical part of the strategy,” she said, pointing to aggressive efforts in recent years to grow MGM’s television team and find shows that work around the world, including big-budget dramas that use some of the skills honed in movies.

“Television and film have a lot of similarities, and their fundamental nature is the same it’s about storytelling and connecting with characters,” she said. “But we have the huge advantage over our film colleagues of being able to tell a story over time. We don’t have to always get it right in the first hour and a half. Although we try to! But we have another 10, 20 hours after that.”

Some of MGM’s shows are adapted from films, which Khanna said goes well beyond simple remakes. “It’s like covering a Beatles song: you have to really have a vision for a new approach for it to make any sense,” she said. Fargo being one example: “It’s not a retelling of the story, because in many ways that would be foolish… Fargo is a state of mind.”

She also talked about how digital is intertwined with television for MGM. “Really it’s just an evolution of our core business,” said Khanna, who oversees television creation and distribution for MGM, which includes all the digital platforms available to license content, from Netflix to Amazon to Apple’s iTunes.

“From my perspective, it’s just part and parcel of a modern television studio,” she said. “The physical media are irrelevant, it’s about the experience, the storytelling. It’s about connecting with a story over time. What will evolve is the format and the length of time the story takes to unfold.”

The conversation turned to windowing: what it can do now, and how it may need to evolve. “The interesting evolution of our business models now is really about the windowing… in the past it’s been very linear: a film is in the theater, then it goes to home video, then it may go to a pay television window, then a free television window,” she said.

“What’s happening now is that it is completely fragmented, it is a kaleidoscope of windows. The balls are thrown up in the air, and you can catch them in any way that makes sense at the time.” And there’s a much longer tail for shows, in terms of people discovering and watching them on various digital services.

Stokes asked about data analytics and understanding consumers, and how this part of the content production industry has matured, in order to guide companies’ strategies, including social media.

“Social media happens with or without you: all social media is is people talking and connecting. It’s just a modern version of the watercooler, and a more robust version in some ways,” she said, before thinking back to past talk about transmedia formats, telling different stories from a property across different devices.

“That has actually slowed down. For some content that makes sense, and is 100% appropriate, for a lot of content it isn’t, and it’s not what the audience wants. They want that filmic experience,” she said. “10 years ago we would talk about making digital online soap operas where the characters would step off the set and into another story, and that’s complicated from a storytelling perspective.”

She also disagreed with the notion that television content is gravitating towards shortform formats, particularly driven by YouTube and its emerging community of creators. “No, it’s not all going to get shortform. There’s going to be a lot of shortform content out there, and there is already, but user-generated content hasn’t and will not, I believe, ever replace professionally produced content,” she said.

“I love watching cats playing piano, that’s fantastic, and kids recreating Star Wars, and interesting new voices coming from the internet. But that is a very different experience from Michael Hirst… writing 10 hours of Viking and surprising us… I think the audience wants to be taken on a journey and surprised, some of the time. And some of the time they want to be in the driving seat and in control.”

Khanna finished on an upbeat note: the joy of watching great TV, and connecting around it. But if she was granted one wish for her career, what would it be? “I’d ask for more hours to sleep! If I could sleep a couple more hours a day, I’m quite sure I could get a lot more done on every front, personally and professionally!”