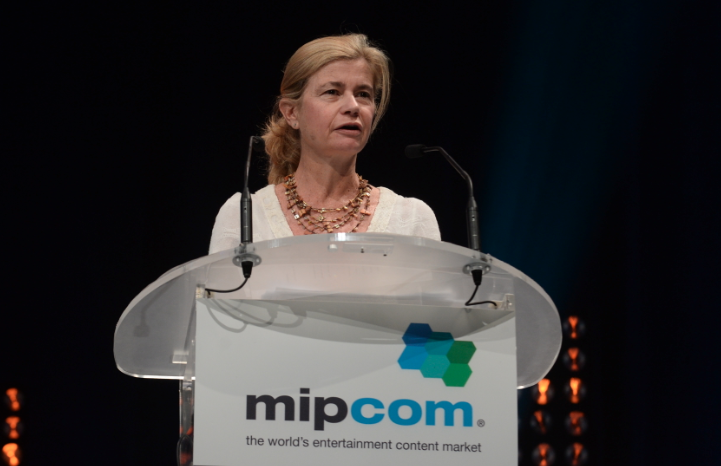 Liveblog: Fresh TV Around the World at MIPCOM 2013

Key highlights at every MIP Market are The Wit‘s Fresh TV sessions, where CEO Virginia Mouseler presents clips of the latest formats building buzz around the world.

Today, she entertained a packed Grand Auditorium with this Autumn’s crop of new shows, starting with a theme of “Bye Bye Cocoon” to indicate tougher shows than this time last year. Then on to this season’s selection:

Utopia, due to air in January 2014 in the Netherlands, a social experiment where 15 contestants live on a piece of land with an empty barn, two cows, 20 chickens, €25,000 in a safe, and are given a year to “build a new and better society”. Each month one contestant is voted out, to be replaced by a newcomer. The distributor is Talpa International.

The Village from Israel is similar: five families trade the comfort of their modern lives for 30 days in a remote, uninhabited location, building a sustainable community from scratch. Each day features “gruelling challenges”, and each night one member of one of the families is voted off, and judging by the clip, there’s plenty of conflict. The distributor is DoriMedia.

Mission from Italy gets six celebrities to live for 15 days with volunteers working “among the forgotten of the world” in places including Haiti, Africa, India and the Caritas soup kitchens of New York. Each episode will feature three missions, with two celebrities per mission. “They will work, suffer, and take over other people’s needs for 15 days…” And then talk about their experiences in a studio show. The distributor is Dinamo Italia.

The Kamaras Love You from the Netherlands gets celebrities to experience life with an African tribe for three weeks, in a reality show. The twist being that it’s all a hoax: the tribe is real, but six of its main tribe members are actors, who are improvising their rituals and comedy situations. The audience get to see both sides discussing what’s happening too. The distributor is Eyeworks.

Why Don’t You Speak English? from the UK gets four first-generation immigrants to spend a week with a native family to learn the language of their new country, but then the hosts spend a week living with them to see what their lives are like. The distributor is BBC Worldwide.

We All Pay Your Benefits is another UK show, which shows a confrontation between four taxpayers and four jobseekers, exploring one another’s lives with the workers having to decide whether they think the jobseekers are given too many benefits or not enough – tapping into a sensitive political debate in the UK. The distributor is Sony Pictures International Television.

Crime Central from Sweden tackles another issue: security and crime, asking the audience to help the police solve the last 24 hours of crimes around the country, with social networks and apps a key part of the show. It’s not from a traditional TV company, but is instead broadcast on the website of a national newspaper. The distributor is Brand New Content.

Married At First Sight from Denmark, which gets six single people who’ve given up hope on finding a partner to marry a complete stranger, chosen by “psychologists, anthropologists and members of the church”. The first time the couples meet is at the wedding, then they spend four weeks living together before deciding whether to stay married or get divorced – with the experts analysing everything. The distributor is Red Arrow.

The Love Nest from Norway sees a bachelor and four single women sharing a luxurious villa for a week, with the bachelor giving the women “crystal hearts” every day to reward them. The twist: those hearts are also worth money, and at the end, the woman chosen by the bachelor gets to choose whether to stay with him, or take the money and run. The distributor is DRG.

Manos Al Fuego from Chile sees couples testing their relationship by subjecting their other half to temptations: five challenges filmed on camera which they have to resist, and if they pass, the couple wins $1,000. If they fail, they lose $200 per challenge – although clearly, there may be other ramifications… The distributor is Chilevision.

Guys in Disguise from Israel sees a single person going on a date with two suitors, but what she doesn’t know is that a.) the suitors have been admiring her in real life already, and b.) they’ll be disguised in an array of strange costumes. For example a giant rabbit or teddy bear. “The outrageous costumes will help the guys break the ice…” The distributor is Armoza Formats.

Generation Cryo from the US tells the story of a teenager conceived by an anonymous sperm donor trying to find out about her biological family. She finds out that she has lots of half-siblings, and none of them know anything about their father. The show screens her mission to find out more, while meeting all those half-brothers and half-sisters. The distributor is Viacom International Media Networks.

Buddy for Hire from the Netherlands pairs a young person “not doing anything at all with his life paired up with someone physically unable to do anything with his”. So one lazy person, and one person with a disability. The former takes care of the latter, and at the end of each episode, they decide whether to “sign a contract and continue their friendship”. The distributor is Talpa International.

Wishing Well, also from the Netherlands, gets young people with a difficult past to help retired people “make their lifelong dream come true”. For example, a pair of twins who’d like to live like millionaires for a day are paired with a former drug dealer and armed robber. The distributor is North Sea Camel.

Olé! from Portugal throws six celebrities into a bullring where they have to catch and stop a wild bull by the horns – don’t worry, there’s no killing – training with seven professionals. The bullring is packed with an audience, with the winner decided by a jury as well as the audience at home. The distributor is Milky Way Formats.

I Can Do That! from Israel has more celebrities: eight trying to prove there’s nothing they can’t do, if given a week to train for it, mentored by an expert. They then perform the activity live on the next week’s show. The distributor is Armoza Formats.

Rising Star from Israel is a live singing contest, where 50 chosen contestants sing in the studio, with viewers able to vote from home using a smartphone or tablet app. When a contestant gets 50% of the votes, a screen in front of them rises, and they advance to the next level. The distributor is Keshet.

Keep Your Light Shining from Turkey is another TV talent show: a 13-week series where each episode gets 12 contestants to sing 20 seconds each of the same song, each lit up by a spotlight when they sing. Each song sees a single contestant eliminated, with a jury choosing a winner from each episode to go through to a grand final. The distributor is Global Agency.

The Band Rules from Spain is another musical show: “Talent is questionable, but it’s all about fun,” noted Mouseler. Amateur singers are backed by a 14-piece band, but if those individual musicians don’t like it, they stop playing abruptly, with big X’s appearing on their music stands. But the contestants have to keep singing, even if they’re only accompanied by a single instrument, or none at all. The distributor is Endemol.

Dancegerous from Mexico and Spain sees two celebrities choose five contestants from the audience to take on 15 dancing challenges: “dancing on a greased floor, on the edge, with a bear…” keeping as many people as possible within the team to win a prize. The distributor is La Competencia / Televisa.

Village Cook Off from Sweden is a battle between villages – led by celebrities who were born there – to be crowned “the nation’s most delicious place” in a cooking contest. Each village chooses a menu inspired by their local food traditions. The distributor is Shine International.

The Thing from Italy is an antiques-themed show where contestants have a mysterious object, and have to figure out what it is in a quiz based “not on previous knowledge, but on curiosity and common sense” over eight multiple-choice questions. The distributor is Banijay International.

Wall of Fame from the US, which is due to air next week on NBC, is a mix of Hollywood Squares and Family Fortunes: a family of three is asked one at a time to answer trivia questions, while guessing which celebrities (who’ve pre-recorded their answers) will also get it right. Lil Jon, Raven Symoné and Jerry Springer all feature. The distributor is Endemol International.

Versus from Belgium is another game show, with 100 contestants in the studio trying to predict the outcome of duels: they stay in the game if they get it right, and fall out if not. For example, can a parkour athlete beat a Paris Metro train to a destination. The distributor is Zodiak Rights.

Sing It, Sell It from Mexico and Spain gets people writing songs and recording them to sell things they own (X Factor meets eBay!), with the best songs aired during the show and uploaded to its website. And stand-up comedians are also involved, improvising skits based on the songs and products. The distributor is La Competencia / Televisa.

And that was a wrap!