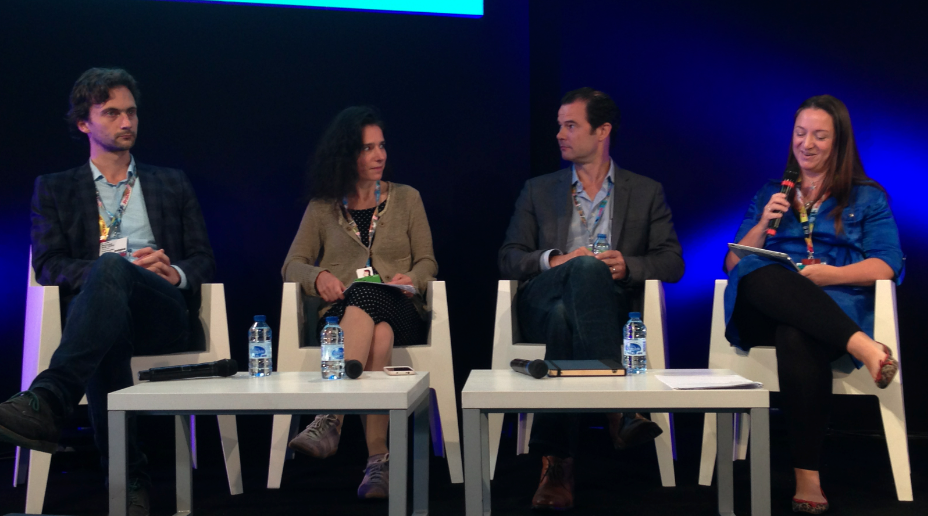 How can you teach and entertain kids at once? It's all about engagement, said today's MIPJunior panel.
By Angela Natividad on October 6, 2013 0 Comments

Walters began by introducing Hopster. “We set ourselves the modestly stated ambition of reinventing the kids’ preschool TV channel”, by prioritising touchscreens, he said. Hopster hopes to create a place where kids can “not just watch but also play, grow, learn and develop.”

Hopster is entirely preschool-focused and promises to launch a high-quality selection of material that encourages kids to “lean forward” and engage every day, said Walters.

To achieve its goals, the company works with child development specialists to understand how kids engage cognitively with games. “If you can’t engage children, you can’t educate them; you can’t help them learn.”

Next came Elalouf, who introduced Tralalère. The company began with two initial beliefs, she said: “Digital content is rarely as clever as children, and behind each child there is an adult. Our goal is to address first the child but always have in mind the adult behind.”

Tralalère produces content for kids of many age groups, and leverages a “double-network” for dissemination: general public (so traditional and online broadcasters) and educational networks (formal and informal).

“Each media has its advantages and its limits,” said Elalouf. You also have to think about viewing context: will the child experience it alone, or at home with his parents?

Finally, age groups also don’t receive the same content. “For preschoolers, the rhythm of activity is a key thing: you don’t want them to click everywhere, which is the first reflex of someone coming into interactivity.” For preteens, learning and being active is key; for teenagers, putting them in a position to make choices is the focus. Because of all the variables involved, Tralalère has relationships with scientists to find out how children learn best.

Chambers presented Sesame Workshop last, and he cemented many of Walters’s and Elalouf’s strong common points.

Sesame Workshop is the non-profit organisation behind Sesame Street, and it produces a great deal of crossmedia content.

To position the discussion, St James asked how it’s possible to maximise a child’s learning pathway. “We do it, and we’ve been doing it for 44 years,” said Chambers. “There’s a rigorous approach to identifying the need, specifically targeting preschoolers… we do a lot of research around whether the preschool audience is engaged and entertained by the content, because they won’t learn if they aren’t.” Here he credited both Elalouf and Walters for approaching their projects much the same way.

The delicate topic of advertising came up, and Chambers mused that it’s funny to see people react so pointedly about the topic — particularly in the context of children.

“It was advertisements that actually inspired Sesame Street” — noticing how well and easily kids picked up ad jingles, resulting in an idea: could the same approach on TV, a new medium at the time, work for learning? Traditional ad models also inspired the “Brought to you by the letter…” segments.

Sesame Workshop’s content now appears on mobile, via podcasts, and on the web. Chambers said the organisation is “constantly experimenting with new partnerships, new devices, new platforms, new ideas… and not all content is right for all platforms.”

But the effort is worthwhile. Less than two years ago, 24% of viewers came from alternative media platforms. Since then, that figure has more than doubled to over 55%, said Chambers.

The panel wrapped with advice to other producers about how to approach edutainment.

“TV producers with great content bring tremendous assets to the table,” Walters began. “Kids learn best when learning is built into a narrative. Don’t be afraid to dive into this space and experiment…. but on the flip side, the space is changing quickly. Those who don’t embrace that change will find themselves significantly disadvantaged.”

Elalouf agreed that producers shouldn’t be afraid to jump in. She also said it’s important to “plan conception before production”: “I often see producers coming to me saying ‘I produced a great series, how can you add interactivity?'” Try ideating interactive elements before a series is produced! Lastly, Elalouf encourages producers to consider “the place the adult will have in co-viewing.”

Chambers encouraged action over analysis-paralysis: “You have to look at the individual platforms. There are so many opportunities to get your content in front of the audience that the hard part is not to limit yourself to just thinking through it.”

Overall, producers are at an advantage if they jump in and start thinking about how to make edutainment better and more accessible. “Parents are totally lost, kids are totally lost, when they’re looking for good educational content,” said Elalouf.