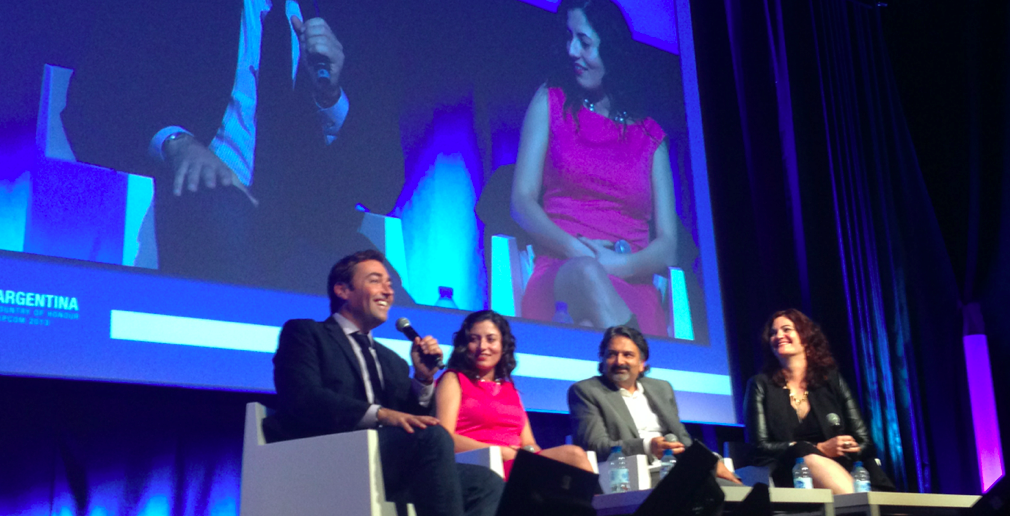 Are pirates truly foes... or friends? Telemundo, IndiaCast and Noktacom revisit the industry approach to digital
By Angela Natividad on October 9, 2013 0 Comments

Moderator Louisa Heinrich, founder of Superhuman Limited, opened with a personal yet universal story: while traveling, she encountered a dearth of content she could legally watch online.

“Of course there are many reasons for this,” she acknowledged. But “by focusing on the pipe, the technology, on the old model, we’re missing opportunities to delight people.”

Blacker picked that point up and ran, driving directly to the heart of what we consider “the digital problem”.

At Telemundo, “we’ve learned to recognise that piracy is a fancy name for super-obsessed fans,” he said. “We’ve learnt to say, ‘what are pirates doing with our content, so we can find them and help?”

He considers this approach working “with the fan clubs of our talent, the little underground groups that love (telenovela actor) Rafael Amaya… in some cases leaking to fan sites, and pirate sites, so they can market for us.”

Telemundo’s strategy includes finding ways to help people watch something directly after it airs (much like pirates would), bringing linear TV to mobile, and even creating “whole series of scripted tweets so when you’re watching live TV,” you have a second-screen experience that’s more engaging.

Recent campaigns include one for Señor de los Cielos, where actors and actresses were interviewed by the characters they play in their telenovelas.

In the past, said Blacker, people thought that “if you put up enough walls, you’ll be fine… this is a thing of the past.”

– Respect the platform or device. “People’s expectations differ by platform,” Blacker said. “Maybe the story shouldn’t be quite the same on a given platform… or maybe a platform just doesn’t work.” You have to understand why people use a platform, and the only way to do that is to experiment.

– Understand your audience. For Telemundo, that’s key to answering the following question: “How do we create products for (audiences) and not make them feel alienated just because they have a preferred way of experiencing content?”

– Listen and lean in. “We’ll sometimes change the outcome of a story based on what we’re hearing, and that outcome will play out across all devices,” Blacker illustrated.

– Outsmart the pirates! This may seem counterintuitive if you’re perceiving them as superfans, but it’s really about recognising their weaknesses and filling those gaps: “It’s key to understand the power of these superfan sites, but in many ways the experience they’re offering is always going to be less than what we provide,” said Blacker, who stresses making access easy: “When you come to one of our on-demand experiences, (we’re thinking) how can we take you one or two steps away from engaging with content instead of erecting lots of complications?”

“A pirate has to take content from somewhere,” he pointed out. “But if we’re creating great stuff, we can benefit from their success and connect with our audience.”

IndiaCast’s Gandhi focused on many of the same points, adapted for the Indian market which is enthusiastic about digital but still working on how best to leverage it. He asked rhetorically whether an opportunity is lost by shackling ourselves to traditional broadcast platforms — which include longer contracts and limited flexibility.

Gandhi also points to OTT players attacking the model on all sides, the proliferation of piracy, the fencing-down of content rights and capacity constraints with platforms.

He suggests making a price-value equation, weighing ease of access against choice limitations.

Finally, Seyhan presented Noktacom, which is composed of seven online platforms that produce their own content. In total Nokta reaches 69% of Turkish internet users, per comscore.

“We’ve become the No. 3 most-visited video web property” behind Google and Facebook, and the first local brand, she said.

Seyhan then presented a series of rich media and customised, interactive ads which appear on Nokta platforms. One example: “You’re watching a trailer of Great Gatsby (on one of our sites) and you really love it. So you share it on Facebook. Once you do and your friend goes on your timeline, s/he sees it through a revolving TV.” This is because the “trailer” is actually a rich media promotion for Samsung Smart TVs.

“We are partners with Facebook so we own this technology right now,” she specified.

For content distribution success, Seyhan advises, “You need to know your consumers and audience, and give them an experience beyond just advertisements.”

The company presentations were followed by Q&A with Heinrich. Her first question was a potent one: what role should broadcasters, rights holders and other players truly be playing in social?

What social offers, said Blacker, is “a three-legged stool: it’s a way to engage with our audience, it provides (local) insights — which we haven’t used as much (as an industry),” and it’s a forum for content creation.

“Letting (people) be part of the storytelling is critical. If we don’t let them in on the action, they’re always going to sit back.” In terms of using local insights, he suggests treating social as a way to see into a given demographic.

Use social to “spend time with them, hang out with them virtually so we can bring (their images) back to our content creators and say ‘here is your target’,” he said.

“It’s key to do a 360,” said Gandhi. “When you have new content you need to use social media to promote and as a platform to advertise. One key thing for me as a content distribution company is to analyse what people are saying about availability of content.”

“We have an in-house production department, but we air this content so we know how important it is to be socially interactive,” Seyhan said. “Even our ad solutions are based on interaction and analytics. We have over 15m profiles on our websites so we know who these people are.”

She emphasised that “people are available, and you have to use this potential online.” She also encouraged content creators to consider shorter formats, because even for their entertainment, online users “want it in six seconds — it’s crazy!”

He suggests creating “a global grid of content experience and all the ways we can work with it, then reinforce these little seedlings of business models that are happening.” In this way, social can be used as “the ultimate crowdsourcing of a business model.”

Finally, Gandhi advised, “Be a little more open to risk. Sometimes we play it too safe.” As for beating pirates? They win when we make our own content inaccessible! he punctuated.