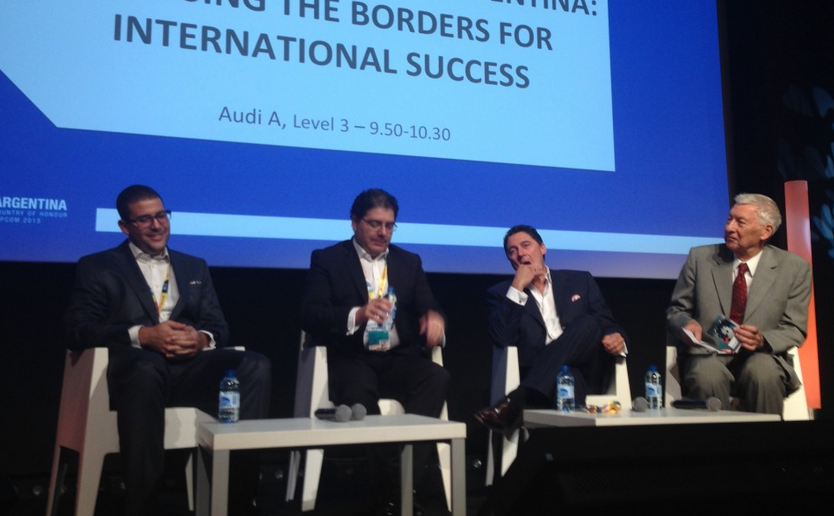 Moderator Smirnoff began by asking a most basic question: What’s interesting about working in Argentina?

“Argentina is a Latin American country with a huge heritage from Europe and a huge understanding of American culture,” said Piasek. To illustrate the point, he shared a trailer for new show Killer Women by Sofia Vergara, which follows a female Texas ranger. The subject matter has a tantalising Latin flair, but also a strong sense of the American Western, and regular jaunts into Mexico.

Ruiz also shared a reel that covered much of A+E’s recent work in the country. “We’re very proud of the quality and production work that gets done in Argentina,” he said. “We’ve been doing this a long time, and we believe that Argentina has the right mix of quality of people, technological knowhow, and rich talent.

He added that the conditions for doing business in Argentina make it an ideal production territory, even despite the political and economic uncertainties. Production-wise, “It’s our second home,” Ruiz said.

Piasek built on that by saying Electus’s strategy is twofold: “We want to tap into the talent and shows that get on air, from the beginning to the early stages, to bring it to the US.” Shows like Ugly Betty, for example, count among the “jewels that we can sell in the US market,” he said. Secondly, “We also want to expand what we have — what we produce in the US and elsewhere in the world — to Argentina.”

Later, Ruiz talked at length about the flexibility of production in Argentina. “We don’t have our own studio,” he revealed. “In Argentina we have a team of executive producers that oversee our original productions. One of the advantages of doing business in Argentina is that you can go and identify different production houses based on their expertise.”

Some houses specialise in reality TV, scripted TV, or game shows, for example.

“When you analyse what’s out there, you could say ‘these 5 prod houses are the best in this type of production’,” Ruiz went on. “It helps to be able to identify key players specialised in (a given) type of production work. We find that the end product comes out better than if you go to any prod house without that expertise, just because it might be ten times the size.”

The sizes of production houses also vary, covering the “A to Z in terms of size, resources and expertise,” Ruiz said. “You have production houses of 3-5 guys that are out there with our cameras, and they do fantastic work. But you also have the Endemols that do major production work.”

He finished by saying, “Knowing the Argentine market really helps you when you’re planning how to bring a product to life.”