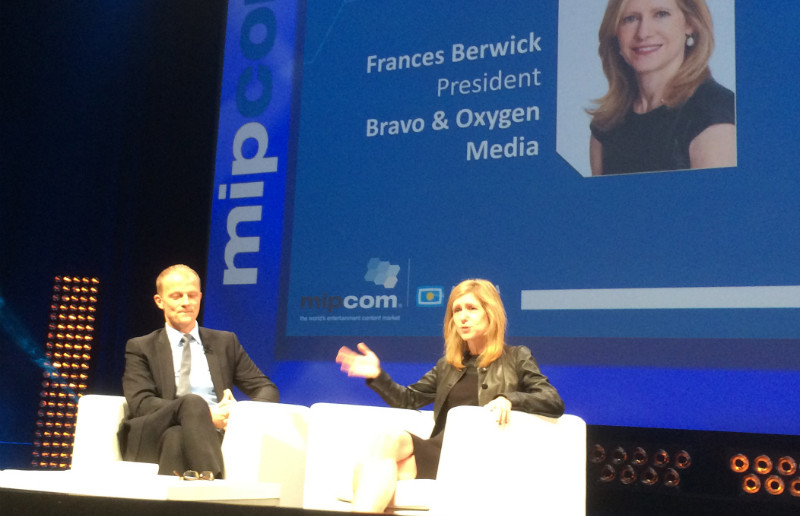 Today, she appeared at MIPCOM for a Media Mastermind keynote, interviewed by another senior industry executive: NBCUniversal International chairman Kevin MacLellan, who outlined his friend and colleague’s background, from head of distribution for Channel 4 to her early days at Bravo when it was a “little-known network” in the US.

Original shows like Queer Eye for the Straight Guy, Top Chef and Project Runway made Bravo and Berwick’s name, and made it a top 10 network in the US, despite only having reality programmes. “We’ve done it through quality first and foremost I think,” she said.

“For a long time reality or unscripted shows were considered to be lowest common denominator… but just as for scripted there’s high and low quality, for reality there’s all kinds of standards… And we’ve set the bar very high. We have quality unscripted shows.”

Berwick added that Bravo has worked hard on its brand consistency: the shows are very different, but there are some very specific things. “We take a very non-judgmental tone. We don’t editorialise. Our viewers are smart enough to reach their own conclusions,” she said, noting that Bravo shows rarely have voiceovers.

“We like to have a lot of irony: the shows are generally fun or funny, but we’re not adding laugh tracks or telling people what they should find funny.”

Berwick said that Bravo works like a publishing house, with 10-12 internal producers supervising a lot of outside production, with a “pretty hands-on” approach to production and edits “The cost of reality is still a fraction: not even 20%, sometimes 15% of the cost of scripted, so it’s a lot less risky,” she said. Bravo can thus make six-episode pilot series and still make a profit.

And now Bravo is starting to develop scripted entertainment. “The cost of scripted is just so extreme you have to take a pause before getting there, but we do feel we’re mature enough to get into that world,” she said, noting that there’s also a bit more longevity to scripted content, suggesting that the audiences for reality shows can be “ephemeral… the audiences for most shows come and go very quickly”.

She added that scripted shows still have more value on the international market, too. Bravo used to have two networks in Latin America in the 1990s, then later sold them off. “We just got skittish,” she said, citing the economic climate of the time. But the real reason Bravo and Oxygen Media aren’t in more countries around the world, said Berwick, has been the success of its licensing business, putting shows on different networks around the world.

Berwick talked about some of the top franchises like Top Chef, and how Bravo tries to keep them fresh – that show is currently airing its eleventh season in the US. The key factors: a lot of work on casting, including changing up cast members. Which has other benefits: “Sometimes our cast believes that they’re very important to the show and thy start demanding these very high salaries! And so by changing them out, we can also manage that too,” she said.

The conversation turned to marketing, and Bravo’s “young, educated” audience that enables it to straddle the lifestyle and entertainment genres, including pop culture. “When we market to them we’re very focused,” she said. “There’s been such a shift in traditional media and traditional marketing: the old rules no longer apply.”

So in the past, Bravo would book local and national TV ads and a print campaign, but nowadays, the focus is shifting towards digital and social. “We get our viewers to be our marketers: if they’re already fans of the network or of the shows we’ll get them to spread the word,” she said, citing the example of releasing early clips on Facebook for fans to share.

Digital was a focus for the interview: a lot of work, but does it pay for itself? Berwick said it does, with Bravo experimenting lots in using social media to drive viewers to its shows. That includes displaying tweets and Instagram photos in the corner of the screen during repeat viewing, which raises ratings as fans tune in to see if their comments and photos have been used.

Finally, the conversation moved onto SVOD, and what that means for Bravo. “There’s an explosion of content, both scripted and unscripted, and the idea that Netflix are doing entire series – not piloting but going straight to series – creates a very competitive market,” she said. “It’s a golden age for TV, but you tell me, is it a golden age for SVOD?.. Right now a lot of SVOD is about movies and scripted shows. The next phase will be about seeing what the opportunities are for unscripted.”