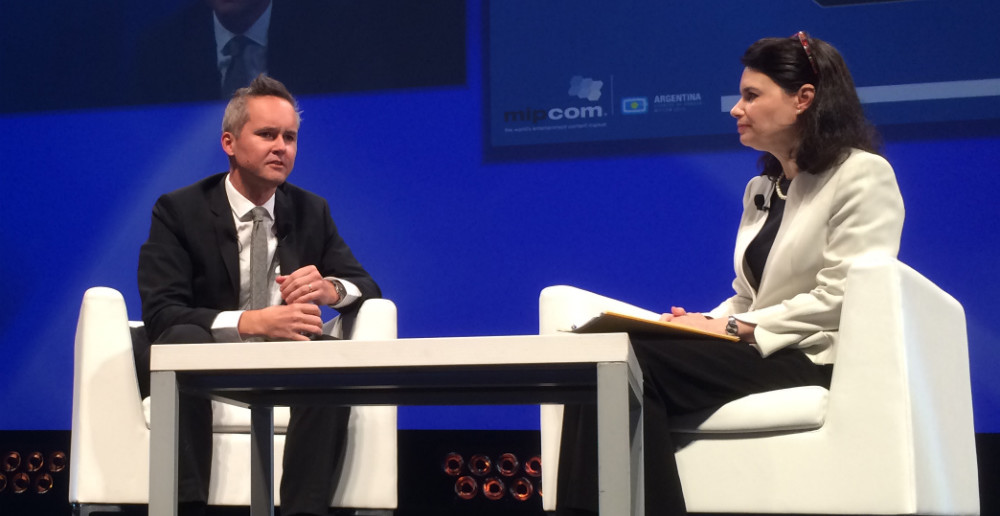 With 24 films and 30 TV shows in development, Amazon might be the next big powerhouse in online TV.
By Stuart Dredge on October 7, 2013 0 Comments

The numbers around the Amazon Studios initiative are startling. After putting a call out for film scripts and TV series pilots, Amazon fielded 14,000 of the former and 4,000 of the latter. It has since narrowed those down to 24 films and 30 TV series that it’s developing.

Amazon Studios director Roy Price stepped up for the final Media Mastermind keynote session at MIPCOM today, to talk about Amazon’s original content strategy. He started with a speech, and was then interviewed by Anna Carugati, group editorial director of World Screen.

Amazon recruited a team of development executives and lawyers in 2012 (“let’s be honest, mostly lawyers!”) with plans to distribute its films through the Amazon Prime and LoveFilm services, with flexibility to work as co-productions as well as studio projects.

“We wanted to develop in a way that took advantage of the realities and technologies of the contemporary world,” he said, citing three trends in particular. First: “It’s so much cheaper to create than it used to be. And number two: it’s so much easier to collaborate: to find other people with common interests.” And number three? “It’s so much cheaper to communicate… in today’s world, ideas and enthusiasms are more contagious than ever before, from Gangnam Style to political movements.”

Price talked about a move form top-down hierarchical decision-driven projects to a more creative, ground-up process. “It’s a much more open world,” said Price, noting that Amazon already has a platform for this with its Kindle self-publishing initiative for authors. And Amazon Studios wants to facilitate this kind of process – in a different way – for television.

Price said Amazon is using data as a key part of its development process. “We know what the audiences like in the past, and that’s a helpful place to start. What are people responding to?” he said, while warning that data must be treated sensitively. “Amazon customers like Breaking Bad and Downton Abbey. Maybe we should make a series about aristocrats in Surrey who are also crystal meth dealers,” he joked.

“Over time people had to learn to make films and TV that was really optimised for the situation you’re watching: on a living room, on a TV, with ad breaks and commercials,” he said. Amazon sees its TV shows as still mainly watched on a TV, but without commercials, and often in binges of several episodes at once. “It will probably find its own voice and idiom as well. People are responding to characters, to idiom, to depth. New TV is getting closer to what the novel used to be.”

Price talked about getting large-scale, international feedback on all the pilots submitted to the Amazon Studios programme. “The game-changing shows are often rulebreaking shows. Groups of smart executives working together will tend to devise some rules. You have to, and they’re useful 99% of the time,” he said. “But the game-changing shows often break those rules… Rule sets risk filtering those shows out… If something can get through a committee of 40, it’s probably something you’ve seen before.”

Price admitted that filtering is one weakness of Amazon’s current system: it can only turn so many scripts into pilots. “In the future, we can have a much higher percentage of incoming scripts actually be visualised: actually get some kind of visual treatment,” he said. “People don’t want to read scripts that much, thats’ why people get paid to read scripts. People like to watch video.”

He showed off a tool called Amazon Storyteller, which people can use to turn scripts into visual storyboards. “It focuses on the assets, you focus on the emotion of the scene, the shots etc,” he said. “What if in the future instead of producing 25 pilots a year, we could produce 25,000 pilots a year? That’s possible, and would be an interesting outcome.”

But for its first wave, Amazon posted 14 pilots on Amazon Instant Video and LoveFilm and made them free for 30 days, generating more than one million views with ratings from viewers. It’s currently in its second pilot season for shows that will be made available in the first quarter of 2014.

In the Spring, Amazon will launch its kids lineup: a raft of shows that aim to be both educational and entertaining, with a mixture of animation and live action. Price finished off by showing trailers for Alpha House and Betas, two new original shows from Amazon Studios, before moving to a question and answer session with Carugati.

Price said that he was keen not to be seen as critical of traditional development processes, including ways of getting audience feedback on pilots: “I do think it’s a little different if you ask a million people around the world about a show versus 50 people in Arizona,” he said.

Price added that “each show is a little more of an island” in the SVOD world, making it more important to reach out to people and help them discover a show: it’s not about a sequence, as in the traditional broadcasting world of schedules and lead-ins.

Carugati probed more on Amazon’s big data: a mixture of what people have already watched on Amazon Prime and LoveFilm, the reviews from the pilots, and then the experience of the development execs within Amazon Studio. How does he drill into all of that to make final decisions?

“Over time we’ll have a better and better understanding of which data points are predictive,” he admitted. “How much do people like the show, do people share with others their enthusiasm for the show? What can you tell me at a high level about who likes the show, and what else they like maybe?.. Sometimes what happens is the numbers group the shows into clusters: these are getting a great response, mid response and low response, and you still have to make some decisions there.”

Carugati also asked about children’s entertainment, with Amazon having started with 2-6 year-olds, and now moving into 6-11 year-olds too. “I wanna come up with a great strong pre-school lineup that is both educational and entertaining, but which also has certain experiences around the show in addition to watching the show,” he said.