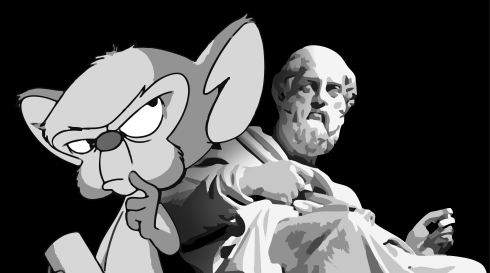 Justin Scroggie: The Wisdom of Toons

What can we learn from cartoons? The Format Doctor has done the research, so you don't have to!
By Justin Scroggie on August 21, 2013 0 Comments

I recently took an online quiz entitled: ‘What Power Ranger character are you?’ The result surprised no one:

You are the Green Ranger. Evil may be tempting at first, but you know better.

Me to a tee. And such useful advice. So I wondered what other words of Toon wisdom I could carry through life to make me a better person. Here’s a selection.

Pinky and The Brain, two genetically enhanced laboratory mice who live in a cage in at Acme Labs, often discuss the big issues of life:

Brain:
Pinky, are you pondering what I’m pondering?

Pinky:
I think so, Brain, but if they called them “Sad Meals”, kids wouldn’t buy them.

ON WHAT OTHERS THINK OF YOU

Pinky has a point. But happiness isn’t everything. As Teenage Mutant Ninja Turtle Michelangelo points out:

MICHELANGELO:
A very wise frog once said: “It ain’t easy being green”.

Kermit, right? But then I remembered the words of Brainy Smurf (when it comes to wisdom, you can’t do better than Papa Smurf but Brainy Smurf comes a close second):

PLEAKLEY:
Sticks and stones may break your bones, but words will never hurt you … unless they are carved into stone and thrown at you.

But I could easily deal with stone-throwing if I had a super-power. However, as we all know, with great power comes great responsibility. As Atlantean teenager Aqualad (aka Garth, codename Tempest, yada yada yada) tells Superboy, he can be:

AQUALAD:
A weapon or a person, the choice is yours, but ask yourself, “What would Superman do?”

I wonder that ten times a day. Optimus Prime (Transformers Animated TV series) has a surprisingly cautious take on Heroism, especially against the odds:

OPTIMUS:
There’s a thin line between being a hero and being a memory.

Practical advice. Ben 10’s Grandpa Max, on the other hand, has no doubts about the value of Heroism:

BEN 10:
What were you just doing, reading greeting cards back at the Mega Mart?

Nothing brightens up your day like making a new friend. Or so says the Narrator to the little boy in blue, Pocoyo. Hurray!

But a friendship must be nurtured. As Obito Uchiha tells us in Naruto:

OBITO UCHIHA:
In the ninja world those who break the rules are called scum, but those who don’t take care of their friends are even worse than scum.

Scum? You need a sponge:

SPONGEBOB:
F is for friends that do stuff together U is for you and me N is for anywhere and anytime at all down here in the deep blue sea!

Become a parent is often a time to seek out the wisdom of others. Mind you, not all fathers are wise. Here is Poopdeck Pappy, Popeye’s 99 year old dad:

Really? Peppa Pig is having none of it:

OK, that was in response to Baby Alexander’s dad bragging to Daddy Pig about the pushchair having ‘mudguards, ABS, and twin air bags as standard’. But you get the point.

And to be fair, Poopdeck is 99 years old. And old people are supposed to be wise, right? Here’s Hey Arnold!’s Grandpa Phil trying to cheer Arnold up:

GRANDPA PHIL:
We’ll grow old together … Oh, wait a minute, I’m already old! Well, okay, so you’ll grow old alone with no one to talk to and nothing to come to, except your fun memories and…
ARNOLD:
(Arnold gets sad)

Nothing in life is certain, except death and taxes.

There aren’t a lot of cartoon series about taxation (though the new animated Star Wars is probably set in a tax office on Tattoine, yawn), so here’s Scooby Doo’s Shaggy on Death:

However I think the last words of wisdom must go to Axe Cop, which premiered on Fox in July 2013, and based a wonderfully insane web comic. It is written by a 5-year-old boy and illustrated by his (much) older brother.

It is about a cop with an axe.

NARRATOR:
One day a cop found the perfect fireman axe. That was the day he became Axe Cop.
AXE COP:
I need a partner now.

NARRATOR:
So Axe Cop had try-outs and hired a new partner.

AXE COP:
Sign up here. We have a gang of dinosaurs to kill.

Known in the industry as The Format Doctor, Justin Scroggie is CCO & Partner of The Format People. This is the first in a series of posts by Scroggie about kids TV, in the run-up to MIPJunior & MIPCOM 2013. Morekids TV posts here!